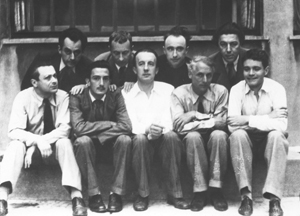 Man Ray’s portraits of famous men comprise an important slice of the avant-garde pie in the pantry of European and American arts and letters, vintage 1920s-1970s. Here are Marcel Proust on his deathbed (1922), André Derain riding in a Bugatti (1927), James Joyce gazing directly into the lens (1922), Jacques Villon flashing his daring profile (1922) and Edward Steichen posing against a dark tonal background (1947).

Through his portraiture, Man Ray (1890-1976) was a cultural link between New York and Paris, between individual painters, photographers, writers and filmmakers of the global avant garde community. For two decades, his studio in Paris was a meeting place for assorted luminaries: Aldous Huxley, Paul Eluard, André Breton, Salvador Dali, Georges Hugnet, Alberto Giacometti, Roland Penrose, Pablo Picasso…. They all came, they all posed.

Most of Ray’s portraits manage to squeeze Dada sensibility and surreal mystery into the image. Some of his subjects are photographed in soft focus, gazing into the distance, like the Tristan Tzara portrait of 1924. Ray also brought innovation to the art of photography through his incessant cropping of the frame, overexposure (as in his 1945 image of Henry Miller), superimpositions, solarizations (Georges Braque), distortions, multiple frames (Max Ernst in four shots with a parrot on his head) and collage/photomontage (Jean Cocteau holding a frame around his face). His self-portraits also reveal Ray’s appetite for experimentation and deadpan humor, such as a study with a half-unshaven face (the photo has two flaps joined together in a before-and-after the razor comparison).

In another now-famous series of shots, Ray captured composers such as Arnold Schoenberg in close-up, cropped to his eyes, nose and mouth; Erik Satie in soft focus, eyes in ethereal glow; Tristan Tzara, from 1934, with a point of light bouncing off his monocle. Some of his subjects pose in a garden, like Aga Khan with boxing gloves (1930), or on the steps in front of the studio like Robert Delaunay with a pipe (1922-1923). These small prints are presented in large mats and frames without disturbing or diminishing the image.

Born Emmanuel Radinsky in Philadelphia, Ray grew up in Brooklyn, where he absorbed the European avant garde in art schools in the city and at the Stieglitz’s 291 Gallery. Early on he formed a friendship with Marcel Duchamp and Francis Picabia and became impregnated with Dadaist ideas. He took up photography in 1915, and by the time he sailed for Paris in 1921, he was a mature artist with a trunk full of portraits of Duchamp, Stieglitz, Edgar Varèse, Francis Picabia and Edward Steichen. He went on to photograph the famous transvestite Barbette (1926), the surrealist painter Knud Merrild as a woman smoking a pipe, and Duchamp in a dress as Rrose Sélavy.

Ray wandered for years in the jungle of European galleries and museums and came back to the States enlightened and bearing gifts of Dada films and mysterious ritualistic objects. “Is Dada dead? Is Dada alive? Dada is,” said Ray. He wanted to be recognized as a painter, and when he was not commissioned to photograph celebrities such as Ernest Hemingway (1923) and Isamu Noguchi (1945), he spent his time painting geometric, abstract and figurative surrealistic oils. Throughout his 60-year career, he was never recognized as a painter, but as a great photographer.

When writing in Camera Work magazine about Alfred Stieglitz, whose art inspired Ray to take up photography, Man Ray describes “A man, the lover of all through himself stands in his little gray room. His eyes have no sparks—they burn within. The words he utters come from everywhere and their meaning lies in the future. The Man is inevitable. Everyone moves him and no one moves him. The Man through all expresses himself.” This is Man Ray’s credo, and his photographs of men continue to provoke and intrigue.

Kiran Bath is a Sydney-born poet and essayist. The recipient of fellowships and support from Poets House, The Vermont Studio Center and Kundiman, her work has appeared in wildness, The Adroit Journal, The Boiler Journal and elsewhere. Catherine Chen is a poet, performer, and author of the chapbook Manifesto, or: Hysteria (Big Lucks). Their writing has appeared in Slate, The Rumpus, Apogee, Anomaly, and Nat. Brut, among others. A recipient of fellowships from Poets House, Lambda Literary, and Sundress Academy for the Arts, they're currently working on a libretto.

As the cinema lights come up after Cunningham, Alla Kovgan’s dazzling 3D documentary about 20th-century American dancer and choreographer Merce Cunningham, the audience makes a trilling noise—it’s the rare sound of strangers noting shared delight. This is only the third day of the Toronto International Film Festival and while audience members remove their 3D glasses and decide whether to settle in for the Q&A, I wonder whether it’s too soon to consider Cunningham a festival highlight.