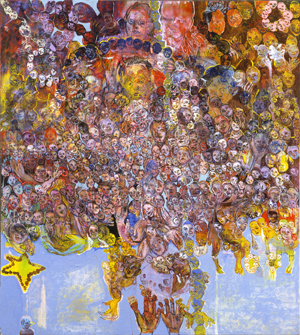 Judy Glantzman got her start at Civilian Warfare and Gracie Mansion Gallery in the East Village, and her work still retains the shambling, honest intensity of eighties downtown art. Critics have cited precedents for her figurative expressionism in artists as dead, white and male as Bosch, Beckmann, Bacon and Ensor; however, the painting and sculpture in this exhibition bears a more contemporary and decidedly female stamp.

The disembodied heads, hands and occasional feet that agitate the mottled surfaces of Glantzman’s heroic-scaled oils and materialize into demonically possessed Super Sculpey figurines seem to have been served up from the same iconographic stew of independent-minded body parts as Susan Rothenberg’s recent paintings and Rona Pondick’s early fetishistic objects. On a formal and conceptual level, Glantzman’s paintings appear to turn their backs on the all-over paradigm promulgated by the male-dominated first generation of Abstract Expressionists in favor of the floating clusters of strokes found in second-generation Ab-Exer Joan Mitchell. And Glantzman’s sculptures—misbegotten little brutes formed by hand from a children’s craft material—thumb their noses at the male gaze as embodied by every sculptural ideal from Renaissance proportion to Minimalist materiality (including a particularly wicked send-up of Degas’ “Little Fourteen-Year-Old Dancer.”)

Like Mitchell, Glantzman seems to bore into the center of her canvas and emanate outward, sometimes paying scant attention to the four corners. Her imagery feels as if it’s straining against the rectilinear picture plane’s implicit grid with the same audacity that contemporary blobitecture musters against the modernist box. (In fact, Glantzman has recently made a number of tondos—reproduced in the exhibition catalogue although not included in the show—that take her working methods to the next logical step and dispense with corners altogether.) And when she’s not ignoring the edges, she’s underscoring their randomness by suggesting a world of activity hidden from view, as in the two hands reaching up from the bottom of the canvas in an untitled work from 2004, or in the strings of heads stretching across many of her pictures in horizontal or vertical bands that seemingly continue on to infinity.

Glantzman’s paintings are rife with hermetic and personal symbols that, while imparting little explicit information, reveal a depth of roiling emotions with a frankness that’s almost painful to witness. Not that there is anything particularly intimate about her imagery; rather, it’s the way the elements of joy in her work—expressed through a liberal use of cadmium yellows, reds, and greens—are checked and often overwhelmed by her compulsively fluttering, anxiety-ridden brushstrokes, which, once applied, never feel secure but remain subject to scraping, smudging, wiping and overpainting until the artist walks away from the canvas. Like the scrappy Neo-Expressionists who crowded the storefront galleries of her early career, Glantzman approaches her art not as a problem to be solved or a craft to be mastered but as a receptacle for outpourings from her emotional well, abandoning the niceties of drawing, color and composition in order to tap a direct line to the canvas from the gut.

A Brazilian artist in his early 30s relocates to New York where he furnishes his East Village apartment with mattresses that he surrounds with sheer fabric hangings. Soon it becomes a haven for experiments in art-making, love-making, drug-taking and gender-fucking.

22. (The East Village and Points Beyond)

A poet living in the East Village launches a write-in campaign for the 1992 Presidential Election. Promising to turn all her “upcoming art events, readings and performances until election day into political events,” she folds her campaign into the tour of a one-woman show titled “Leaving New York” that takes her to 28 States.