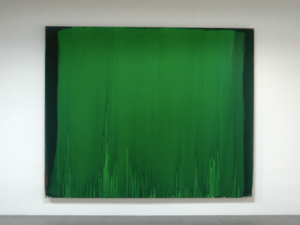 Although he has shown extensively in Europe for many years, it’s only in the past decade, when he began showing with Peter Blum, that his stature in America has grown large in a more public way. This, despite the fact that Marioni exhibited his work at Bykert Gallery in the 70s, was tapped by Brice Marden for a show at Artists Space, and was included in a recent Whitney Biennial. However, it took the New York art scene a long time to take notice—until it was unavoidable really. As soon as it appeared that the renowned critic Michael Fried had apparently stepped out of retirement (at least from contemporary art) in order to give Marioni the nod, how could the art world no longer take notice?

That said, who would expect anyone involved in a trend conscious commercial art scene to get excited about monochrome painting? The works’ beauty was too basic, non-critical even. In truth, the monochrome tag doesn’t even really fit Marioni so well. The term implies a kind of one-dimensionality, whereas his works are polychromatic, having been made from multiple transparent glazes of color. Marioni was once a part of the Radical Painting Group, which included nearly all of today’s leading monochromists. I find the “Radical” title suspect too, however, because it seems to overcompensate for what is an inherently conservative art movement. I have many more issues with the orthodoxy of the Radical Painting than with the art itself. What’s most interesting about much of Marioni’s painting doesn’t always jibe with the official party line anyway.

Marioni’s current exhibition inaugurates Blum’s new Chelsea gallery space. Although only five paintings occupy this spacious ground floor gallery, it feels quite full, as the works are both large and commanding, though still humanly scaled. Most of the paintings are about ten by eleven feet, and just off square. The color is complex, with a bias towards green. What often appears black at first glance is often two or more distinct color glazes that produce the effect of black in their overlay. Marioni’s ambition is immediately apparent in these new, larger paintings. They seem much more closely aligned with Abstract Expressionism, and the broader stretch of “American Type” painting in general, than with the late-minimal practice of Radical Painting. In many ways, by broadening the scope of his project, and making a play for greatness, Marioni has now left his fellow monochromists in his wake.

With its dark and fulsome surface, “Painting, 2006,” which is the show’s centerpiece, recalls Clyfford Still’s grandiose “Untitled, 1952,” (Art Institute of Chicago). Marioni has tested the limits of his program with these new paintings, pushing his tools and materials to their absolute limit. Though, as with Still, one often wonders about the necessity of extreme size. Would the paintings be any better or worse plus or minus a few square yards? It’s hard to say.

At roughly seven by seven feet, the smallest but still sizable painting in the exhibition, also titled “Painting, 2006,” is also one of the show’s most radiant. Its off-white and pale yellow combination catches raking light from the North as it filters through the gallery’s frosted glass door to the left. The experience is purposefully Vermeer-like, and the painting’s soft golden glow recalls the plaster wall and drawn drapery in the Dutch master’s intimate “Woman Putting on Pearls.” To his credit, Marioni manages to achieve more nuance with acrylic paint than most painters are even capable of realizing with oil. He is one of the very few painters whose acrylic surfaces never feel plasticky. In fact, they often look rich, juicy even, in their carefully manipulated downward flow.

Despite the glow, I do, however, have a few issues with Marioni’s work. If these paintings are principally about a color experience, it seems to me that they are fundamentally flawed in that they have highly-reflective, glossy surfaces. How can the viewer become enveloped in the color, or experience the “body-transfer” that the artist himself desires, if one’s own image is constantly reflected within the paint? The paintings operate as colored mirrors most times, blocking one’s gaze. This deleterious effect was slightly diminished in this instance in that the gallery is relying on natural light, so the space is darker, and the light more ambient than one might expect.

Secondly, I feel that Marioni’s constant use of a paint-roller runs counter to the emotional effect he now seems interested in putting across. The roller texture itself is generic, impersonal by nature, and most often recalls the skim-coated surfaces of sheetrock walls. I understand the idea of distancing or removing the hand, and the formalist rigor that such a strategy implies—I don’t necessarily want to be taken to the brink of the sublime in the same bombastic manner as with Still—but the reliance on the roller strikes me as a kind of hedge or dodge. It seems like Marioni might be holding back, or playing it safe, hiding his hand behind the roller, at the most crucial moment in his career, especially now that he has many people’s attention.

One problem that I have with monochrome painting in general is that all of the action seems to be relegated to the margins. The most interesting activity in the paint is always happening at the edges where the paint tends to unfurl. I understand and acknowledge the critical function of servicing the edge and the role it plays in formal painting. I’ve just grown weary of scanning the sides and bottoms of paintings looking for painterly incident and excitement. Certainly a Pollock painting is as interesting at its core as it is at the edge. Frank Stella once famously remarked that the Abstract-Expressionist always “got into trouble at the corners,” whereas the monochromists are only too happy to stay there and face them.

Also, I don’t buy the implication that monochrome painting is somehow the most superior type of color painting. Duochrome and trichrome painting are also modernist and reductive but often more complex in their color interaction—think of Albers, Louis, or Rothko for starters. Color becomes activated in the presence of other colors, so the whole idea of having a single, dominant hue seems wrongheaded somehow. Often the white wall of the gallery is the strongest counterpoint to a monochromatic field, which is why they’re often reproduced as installations in catalogues rather than in isolation. Wouldn’t more internalized counterpoints, besides marginalia, be advantageous to the advancement of color painting? Even atonal music, such as Terry Riley’s infamous composition In C, contains many structural counterpoints. Even Ad Reinhardt, a common influence among the Radical painters engaged composition to some degree.

I’m not so much questioning the quality of Marioni’s paintings here, as much as I’m debating the dogma of Radical Painting. Clearly, he understands a great deal about color. He’s devoted most of his life, successfully, to the pursuit. I once saw a medium sized yellow painting of Marioni that had the absolute density of dwarf star. The yellow was advancing so strongly that I felt as if I were being shoved around the room. I also appreciate the fact that his work is unabashedly heroic. Some critics might read this as a historicist strategy, an attempt to regain paintings lost authority, but to me it seems more germane to these grim times than much of whimsical work that is supposedly much more relevant. This is easily one of the most ambitious painting exhibitions of the year. I find Marioni’s painting exemplary, rather than temporary, among contemporary art.

Can medieval art find a niche in the contemporary art world? Gothic Spirit: Medieval Art from Europe organized by London dealer Sam Fogg and now on view at Luhring Augustine embraces this question.

Come to Your Census: Who Counts in America?

The core of the YBCA’s census awareness program was and still is a group exhibition titled Come to Your Census: Who Counts in America?, in which more than 20 artists, mostly from the Bay Area, could exhibit their work on citizenship and civic presence, supported by workshops and performances in line with the organization’s multidisciplinary program.