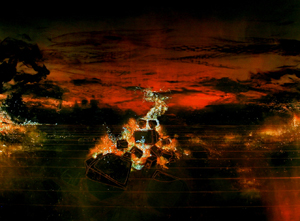 Judging by the look of the eerie outcropping of debris that comprises “Panic Grass and Feverfew” (2006), Jon Elliot has a pessimistic outlook for the future of the environment.

Twisting copper coaxial wire branches compete aggressively for space with cocoons of stacked television sets wrapped in plastic sheeting. The electronic chrysalises seem poised to give rise to new life forms better equipped than those carbon-based to repopulate a ravaged, lifeless planet. The scene sets an ominous tone for the exhibition, and the environmental skepticism mounts throughout. Surprisingly, though, this impressive sculptural introduction proves to be an anomalous accessory to a set of more traditional, but still provocative paintings.

In their deep, panoramic space, Elliot’s environments share something with those in Alexis Rockman’s eco-paintings. The color palette is a serotonin-sapping combination of muddy blues, burnt oranges and dark, inky greens. Outside of customized van interiors from the mid-seventies, this isn’t a scheme that one would choose to demonstrate good taste, but is effective in establishing a consistently forbidding mood.

As the title suggests, “Plague of Excess” (2005) works on bleak assumptions. Its dense umber sky is marbled with cinder-colored clouds that hover portentously above a smoldering fire fueled by appliances. The post-apocalyptic bonfire of the vanities generates a plume of acrid yellow smoke that may make viewers want to wash their mouth out with purified water.

Similar compositional devices underpin many of the other paintings in the show. While repetitive, the low-angled water’s edge perspective employed by Elliot reinforces the dramatic effect of the work by placing the viewer into the depicted space. This is important considering the degree of finish and labor involved in each work—they are technically rigorous and painstakingly layered with resin and paint. Stuccoes of pulverized electronic parts and gooey oil paint fashion the textured banks in the extreme foreground of several paintings. Each of these elements combines to create consistently well-cultivated and challenging surfaces that remain brooding and cautionary in spite of their alluring exteriors.

In “Run Off” (2005), a scattered assortment of Elliot’s familiar television sets is carefully scratched into the painting’s resin-coated surface. Cathode ray tubes occupy the foreground of the painting, diminishing in size as they fan outward into deeper space. An array of perspectival lines defines the scorched terrain beneath a swirling, cadmium orange sunset. Despite the setting sun and expansive panorama, the vista has all the quaintness of a never-ending parking lot on the moon of a cold planet.

For all the sprawling desolation in the show, there is a lone trace of human life. Five silhouetted figures march like zombies toward an illuminated city in a valley below. Even as a parting piece in the show, “Procession 1” (2005) functions as a prelude to the implied apocalypse that haunts the remaining work, and comes across as an admonition rather than a sign of hope.

The East River waterfront backdrop of this Williamsburg gallery is hard to ignore. It bears an uncanny similarity to the forlorn views in Elliot’s paintings. Amidst the ever-growing urban backdrop, an unobstructed crease of air revealed a view of the river. The surface glistened and the air was mild and soothing, but I couldn’t help but register the faint pounding of construction as a sign of the relentless, metastasizing development in the area. In light of Elliot’s distressing prognosis for the future, a deep breath and a long look at what is left of the community along the shore is in order.

One of the biggest festivals in Europe, and partner to massive parallel industry events like the European Film Market, the Internationale Filmfestspiele Berlin is a behemoth, and over the past several years the consensus around its creative direction under Dieter Kosslick has turned decidedly sour. The job of a festival this size is, perhaps, less to reinvent cinema than to provide a tent capacious enough to accommodate all types of cinematic output.

An impressive sampling of painter, architect, ecological activist, and sometimes-philosopher. Friedensreich Hundertwasser’s manifestos, speeches, and writings, published in English for the very first time, alongside some of his paintings and designs from his long and varied career.

The Once and Future Queen: Amber Sparks's Weird Realism

Amber Sparks’s third story collection And I Do Not Forgive You: Stories and Other Revenges is, as the title suggests, teeming with tales of retribution, though reducing the book or even its concept to that of a glorified burn book would be way off the mark. Desire, anger, murder, madness, robots, gods, monsters, apocalypses, love, hate, violence, magic, fairy godmothers, women as heroes, and men behaving badly (badly-behaved men who often pay with their lives, or hearts, or souls for said bad behavior): all these things live within this book’s pages.