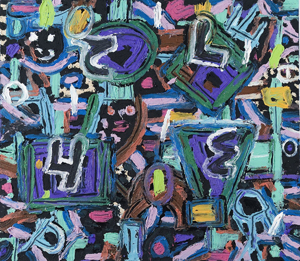 Jay Milder first came to recognition in the early sixties in relation to a group of figurative expressionist painters, including Peter Dean, Nick Sperakis, and Bill Barrell, called “Rhino Horn.” The name of the group relates to the powder ground from the horns of a rhinoceros. This is pretty potent stuff – an aphrodisiac, some would claim. And so, by association, Milder is an artist who works with paint as a kind of visual aphrodisiac that lends itself to an untamed style of anti-formalist painting.

The paintings in his recent exhibition are more visually direct than the works from the sixties and seventies with less mottled pronouncements of color. For example, “Kabbalah 12” (2006) is more formally coherent than “Kabbalah 17” (2003-06), and, although similar in color and juxtaposition, “Kabbalah 17” is more coherent than “Kabbalah 15” (2006). The titles refer to the ancient Hebrew text in which certain configurations of numbers contain hermetic references associated with mystical power. “Kabbalah 12” reads more coherently than the other two multicolored paintings given the predominance of a blue field. Also, the larger scale (50×56 inches) used in “Kabbalah 12” clearly works to the advantage of the cryptographic signs and numbers within the field. The consecutive three-year date attached to “Kabbalah 17” suggests that Milder may have had some hesitancy in finding a “resolution.” By reviving the painting, he made the composition function more cohesively than in “Kabbalah 15.”

Milder is not only painting subjects related to the numerology of the Kabbalah. He spends much of his time occupied with mysticism in general. A large part of his interest in mysticism is related to Old Testament stories such as the intervention of God at the moment Abraham is about to sacrifice his son Isaac. What happened at this moment? Was it merely a test of faith? Or was there a mystical transmission between God and Abraham as a metaphor of Abraham’s obedience to sacred law. Other “miracles” and anecdotes from the Old Testament are evidenced in painting titles such as “In the Beginning” (1994-2005), “Noah’s Ark 12” (2002-06), and “Eden Spring 5” (2005). In “Noah’s Ark 14” there are vector arrows shooting out in a quadrant from the center of the painting, but in other versions, there are no vectors. Conversely, while some paintings carry the same titles as other paintings, it is often difficult to tell why the abstract subject matter – namely, the circles and numbers—reappear in similar configurations but under different titles. One might speculate that these visually syntactical configurations refer to numerical configurations of the numbers found in the Kabbalah.

Jay Milder likes to listen to the blues – the Mississippi Delta Blues – and this gives me a clue about his paintings. The great blues guitarist and singer B.B. King once exclaimed that he had worked most of his life to get all his songs to sound the same. And this is precisely the point: How does a painter who works in an expressionist genre such as Milder get to the point where the paintings begin to reveal a rough-hewn, all-over compositional structure? Often we associate this concept more with minimalism or formalism, where a certain consistency in the forms is often deemed essential. But for Milder, this seems a more difficult task because the signifying surface is harder to control and more difficult to hold intact.

The drawings in the back of the gallery are problematic in that they lack the density of the paintings and appear too loose in their delivery. Another problem is that they look too much like the Dubuffets in the gallery across the street. Milder doesn’t need to separate drawing from painting. Part of the eloquent sameness of Milder’s work (to reference the statement by B.B. King) is that he has infused drawing so precisely within his peculiar brand of expressionism – in such a reduced and cool manner – that the painting does not need this additional support. When Milder draws, he is painting, and when he is painting, he is drawing. It all fuses into the same ritual, the same body, the same ineluctable mystique. And this is where I think Milder wants his painting to be – at least that is where I like to see it. Everything here is inextricably connected. Wherever there is a predetermined cause, there is bound to be an unexpected effect. Does it sound like Buddhism? Indeed, it does. Milder has recently stated that all his works are implicitly connected. For him, the numerology of the Kabbalah underlies all aspects of reality including not only the way a painting is conceived and executed, but also its impact on the visual environment around us.

Aria Dean: (meta)models or how i got my groove back

In The Age of Surveillance Capitalism, Shoshana Zuboff describes our contemporary political and economic regime, in which physical movements and online social relations are carefully tracked in order to mine activities related to consumer choices and habits.

Listening In: The Art of Intuitive Engineering

Užupis is also the name of a band led by American drummer and vibraphonist Kenny Wollesen, who found inspiration in the place. The band was planning to come together in order to play the Vilnius Jazz Festival, one of the best in Europe, in October, but the pandemic prevented the group from uniting there. The longtime artistic director, Antanas Gustys, found a creative solution.