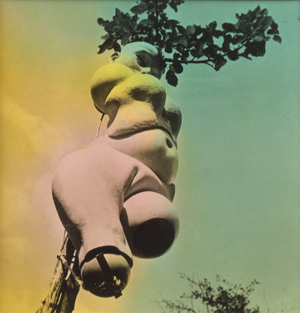 “Hans Bellmer: Petites Anatomies, Petites Images“ proves that shocking scenarios can be captured on a very intimate scale. A close inspection of each of the nearly seventy miniature vintage photographs reveals exquisitely disturbing images of Bellmer’s famous “dolls,” models, and surreal still lifes. The majority of these works were created between 1934 and 1938, in part informing the original German edition of Die Puppe (The Doll, 1934), a portfolio of ten black-and-white photographs, which the artist published privately at his own expense. While Bellmer is far from unknown in America, he is nowhere as famous here as he is in Europe; and it is only within the past decade that a number of English-language monographs have attempted to look beyond the artist’s unsettling surfaces and explore his oeuvre in the context of his time.

Born in 1902 in Katowice, which at that time belonged to Germany and is now part of Poland, Bellmer grew up with a terrorizing father. He was a teenager during World War I, who, though not drafted, matured in the face of its horrifying aftermath. While living in Berlin in the 1920s, he saw many of the thousands of dismembered war veterans who lived in the capital and who were so well illustrated in the social critiques of Otto Dix and George Grosz, both former soldiers. During these “Golden Twenties” when the discrepancy between the rich and poor, the fortunate and those in despair in Germany reached its height, Bellmer received his intellectual education. He dropped out of the Berlin Polytechnic, where he had studied engineering at his father’s suggestion and began to read the works of Marx and Lenin, frequented early Dada meetings, and became acquainted with Dix and Grosz. The latter taught him satirical drawing and helped sharpen his eye for social injustice and dysfunction. To support himself, he worked as a commercial artist from 1927 to 1933, when the rise of the Nazi Party led him to quit his work as a sign of resistance to Fascism. It is at this time that Bellmer took his first photographs of bound girlish nudes, a stark contrast to the propagated Nazi ideal of an Aryan physique that was young and fit to reproduce. These portraits were a surreal outcry against society’s values of that era, which allowed the mutation of national concerns into a nationalist obsession, and the widespread acceptance of public violence against those deemed non-Aryan.

As the power of the Nazis increased, and with it Bellmer’s frustration, the artist turned from actual models to dolls, which he could completely dominate and mutilate, and which were a pliant recipient for any brutality imaginable. At first, these were made from pieces of toys, but later he often used papier-mâché. The full force of desire, hatred, longing, and aggression sparked by the political events of the time were redirected towards the female body and channeled into a sexual energy that is as dark as it is desperate. Throughout this series, the female form serves as object of desire, yet its attraction, instead of the classic ideal of the nude, is the willful alteration and destruction of its natural shape. However, while the female shape can be dissected, deformed, or destroyed by the male artist, it will always remain the other, the uninhabitable embodiment of the opposite sex. Because of this eternal dichotomy, the female form becomes an obsession, an itch from which there is no relief.

Bellmer’s interest in a fetishism that is tied to artificial female body parts was largely generated by a collection of letters by the Austrian Expressionist Oskar Kokoschka. Addressed to Hermine Moos, a doll maker in Berlin, and written in 1918, they were published as “Der Fetisch” in 1925. In these documents, Kokoschka commissions and gives instructions for a life-size replica of his former lover Alma Mahler, who had recently left him for another man. While the resulting doll proved a disappointing replacement, Kokoschka nevertheless lived with, dressed, and painted it for months before finally beheading it, thus signaling that he was cured of his fixation with the true Alma. Bellmer was fascinated by the extent of emotional and psychological despair inherent in Kokoschka’s unusual relationship to a doll. His photographs capture the intensity (to which he could relate) of that kind of inner turmoil and erotic longing.

When viewed in sequence—and this exhibition provides a rare opportunity to do so—it becomes obvious that Bellmer’s depictions of dolls (most are called “La Poupée”) are varied and finely nuanced, creating an almost encyclopedic exploration of the subject matter. From hand-colored to black-and-white depictions of dolls on bedspreads and floors or set against wallpapers, open skies and lush cushions; from provocative close-ups of female genitalia to more elaborate constructions of multiple breasts applied to awkwardly twisted and headless torsos with legs and arms protruding in every direction; from Lolita-esque fragments, ornate with hair and bows, to simplified still lifes featuring disjointed body parts alongside geometric objects, such as a hoop or empty vessels, Bellmer’s fantasy seems to have been boundless. Throughout these images, the relationship between the artist and his subject fluctuates. At times, we look down at the dolls from far above with a fairly objective gaze; on other occasions, when we are able to discern the rest of the body only by looking up from between the doll’s legs, the confrontation with sexual aggression is more direct.

Because of the photographic lens, we not only see what the artist wants us to see, but what he chose to see himself. We are looking through his eyes, yet no trace of his presence remains in the compositions. This might be why Bellmer’s images are so haunting, frightening, inspiring, and mythic. Though the audience immerses itself in the fantasies and very personal desires of one distinct mind, it will never have the impression of actually getting to know the person to whom these thoughts belong. We only get to know a minute part of Bellmer’s secret world of obsessions, which I would argue was authentic rather than cultivated on sensationalism. It is one of the rare occasions in which we encounter part of the inner essence behind the protective façade. Trapped in the fictitious dream of another mind, we are complicit in his lust but are also susceptible to a deeper level of understanding. Once we see beyond perversion, beyond the beauty of the formal relationships inherent in each body curve, each twist and joint, the dolls, rather than being victimized, become powerful characters on a surreal stage. As silent impersonators of sadomasochistic fantasies, they seem to mockingly flash their bare assets, while remaining forever indifferent to the true flesh and blood on the other side of the lens, or in this case, of the picture plane.

Never-before-published intimate portraits of nude men the Zurich-based photographer invited into his makeshift studio, located within the apartment he shared with his mother, show the studio as a refuge for homoerotic desire away from relentless Swiss normativity.