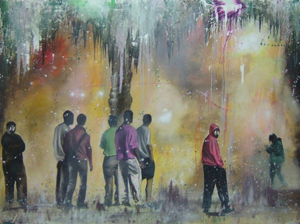 Till Gerhard’s painterly eye has been singed by the coruscations of a too-explosive LSD trip. Objects in his paintings either gleam too brightly, or disappear into shadow. Splotches of neon paint dapple his surfaces like retinal floaters, imbuing each work with a hallucinatory aura befitting, to a clichéd T, the era from which his narratives are drawn.

It is a strange predilection that urges an artist to capture in paint the very specific mood of nostalgia. One might imagine the task is an inane one; as simple as bathing a scene in sepia. And yet, does not the very existence of such stock visual devices reaffirm the veritable link between perception and emotion (a necessary foundation for all art); and might our understanding not be served by an exploration of that link even when the practice itself would seem rife with sentimentality? “Black Nostalgia” is perhaps redundant in that the word “nostalgia” expresses a certain darkness (that of the irrevocable) without the need for qualification. Yet it is Gerhard’s hierarchical privileging of the dark side of memory that lends his work its specific import. The scenes he chooses to memorialize—dimly felt moments from that tumultuous decade in 20th Century American history when counter-culture briefly flourished—are rendered with a discreet maleficence that belies their offbeat humor and whimsical color-scatterings. Thus, an otherwise banal preoccupation with “hippy bullshit” is transformed into effectual social commentary. 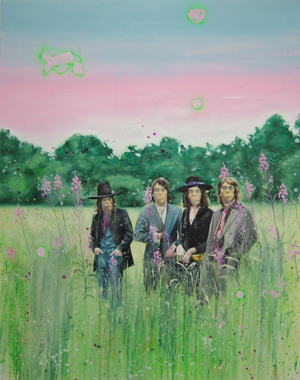 In several of the works currently on view at Stellan Holm, the eyes of Gerhard’s figures appear only as shiny white paint blots. It is not just Gerhard—the observer of these strange scenes—who has been “blinded by the light,” but an entire generation of astral searchers and burn-outs. Like owls in the night, these subjects of a fragmentary narrative flutter about their haunted dreamscapes, transgressing and otherwise running amuck.

Golden Dawn depicts a group of merry pranksters dancing like harlequins beneath a totemic statue and an explosive morning sun; the only thing missing is a psychedelically emblazoned school bus. The March takes place like a side narrative to the famous D.C. political rally of ’63. Wading through the reflecting pools of the Washington Mall, a young couple comes face to face with cultural destiny. In Hölle der Saison, a group of black youths looks on at what could be the after-inferno of Los Angeles’s Watts Riots. In the lower right hand corner of the canvas a solitary Caucasian male strolls seemingly unawares into the smoke and fire, brandishing a trumpet. The work (which contains a questionable pun on the show’s title) is both homage to the roll played by Black Culture during the upheaval of the 60s and 70s, and a Last Post bugle call for the imagined memories of a false past. 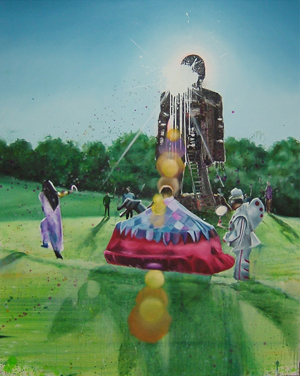 For the offspring of baby-boomers, grappling with the discrepancies between their parents’ generation and their own has never been an easy task. For the most part, members of Generations X and Y seem divided between embarrassed disciples of corporate culture, and reverent wannabes, aching with false nostalgia. Employing an irony that serves to indict both sides, Gerhard effectively dissects the issue within a double-paned historical framing device. While the lens he uses is drawn from America’s Days of Rage, the overall sentiment is decidedly 19th Century Romantic. By tracing the steps of Ken Kesey back to those of Caspar David Friedrich, Gerhard reverses the chain of influence by which Romanticism was brought to America in the form of the Hudson River School and New England Luminists. Acid tripping is read as an outgrowth of Emersonian ideals, and the Old World/New World exchanges implied by Gerhard’s side by side depictions of Brit Rock album covers and 1960s American psychedelia are grounded by a larger historical precedence.

Unlike the hyper-realist hacks currently exhibited at neighboring 24th Street galleries, Gerhard’s utilization of photography as source material for his paintings is neither insipidly plagiaristic nor offensively uninspired. For Gerhard, the photograph exists not merely as a means for embroiling the viewer in a tiresome debate over visual perception in the digital age, but as a bisection of epochal occurrence (replete with socio-cultural connotations) upon which to graft personal and trans-historical meaning. That is to say, he possesses style enough to warrant his recent inclusion in Saatchi’s “Triumph of Painting,” and ingenuity enough to stir questions well outside the realm of formalism.

In the show’s title work, Britain’s Fab Four loiter in a sunbathed field, their famous mugs transformed into ape’s faces. The work is as much a swipe at the impenetrable iconography the 1960s as it is an indictment of our unwillingness to have understood the lessons that era prescribed. To that segment of America living in a state of contented post-technological sedation, the tune in/drop-out culture alluded to in Till Gerhard’s works—and the Romantic spirit attached to it—might as well be Planet of the Apes.

DAVID MARCUS was the much-loved editor of numerous anthologies of Irish fiction and poetry.

Gerhard Richter: Painting After All

If someone had asked me six weeks ago to write a review of an exhibition I couldn’t physically go to see, I would have said no. Well, that was six weeks ago. On March 4th, the Met Breuer opened Gerhard Richter: Painting After All, a major show of work by one of the most celebrated artists of the late‐20th and 21st centuries.