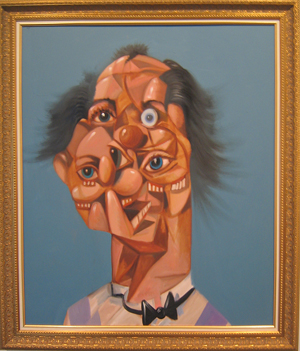 “How low can you go?” was the question Chubby Checker asked in his 1962 dance hit “Limbo Rock.” No doubt the ghost of Clement Greenberg would be doing its share of twisting and shouting if it could witness the current situation that has turned his theories of high art versus schlock as expressed in Avant-Garde and Kitsch into “Avant-Garde is Kitsch.”

Regarding the kitsch quotient, few exhibitions in recent memory have roused the debate of just “how low can you go” more than George Condo’s “Existential Portraits.” As a self-proclaimed aficionado of “Kitsch Art,” particularly that most vulgar American hybrid that evolved during the heyday of the East Village art scene, I’ve often wondered just what the parameters and limitations of kitsch truly are. Painting, because of its time-honored position as the epitome of beauty in the visual arts, is the prime target and punching-bag for “advanced” critics, who hope to subjugate it to socialist critical theory, as well as for subversive artist types who want to use it to shove the disgusting, pathetic mess that is life into the faces of their audience. The Greenbergian canon of “quality” was elegantly explicit (though flawed) in its principles of evolution and ideals. But the idea of kitsch is more nebulous, more pernicious, existing as a kind of aesthetic cockroach, impervious to nuclear strikes by the most erudite and strident of contemporary art critics, and thus able to thrive in an environment of the harshest slash-and-burn political correctness.

Still, to attempt a logical analysis of the criteria of kitsch would require answers to some of the following questions: in a culture that for generations has succumbed to the decadence of “bad taste,” of which kitsch is a manifestation, are there still limits to what’s considered acceptable? (In “Maja Visida” (2005) Condo seems intent on dishing out a double dose of “bad taste” clichés by combining a cheesy cigarette smoking “seductress” lounging in a revealing negligée with a cubistically fractured clown face.) Is there a point at which a maximum saturation of kitsch is reached, and the “bad” begins a transmutation into the “good?” (In “Jean Louis’ Mind” (2005) and “Young Architect” (2005), Condo displays such apparently effortless facility and dexterity in the execution of these “portraits” that he approaches a slickness that might just be too “good” to be truly or at least provisionally “bad.”) Can there be a school of kitsch, a priesthood, a cult, or will that turn it into a bloodless academy and therefore worse or better depending on the physics of aesthetics? (Carroll Dunham, Lisa Yuskavage, Rhonda Zwillinger and Dave Humphrey all maintain a practice within the more sophisticated realm of kitsch, and Condo’s “Big John” (2005), a cock-eyed snaggletoothed smoker in a striped shirt bears a striking resemblance to some of the inhabitants of Keily Jenkins’ bizarre world of characters. Could these artists be considered part of a movement?) Is “good” kitsch really “bad” kitsch? (Can Condo’s paintings eventually transverse the aesthetic spectrum and return to high art tastefulness?) Can there be abstract Modernist kitsch or Minimal or Conceptual? (Remove the goofball figures from some of these paintings and you’re left with atmospheric hazes or monochrome slabs that could pass as pseudo Olitskis or Mardens.) In our brave new kitsch-o-licious world, have we finally overthrown the culture commissar’s hegemony and rendered “good taste” and “high art” as derogatory epithets, establishing kitsch as the current aesthetic standard? (Could Condo and the kitsch clan now be the latest targets for an artistic coup d’Etat by who knows what outrage?) The list could go on, but the point is, kitsch has its own canon of values and virtues and seems to operate in an aesthetic field apart from art or anti-art, a world through the looking glass where success is failure and second-guessing the essence of “good taste” must be third- and fourth-guessed as well.

It’s one thing to assault the prevailing norms and another to challenge them with verve, originality and sophistication. Condo seems content to expose us to the instantly graspable “funny paper” version of cubo-surrealism, rather than delve into the more exotic and complex pictorial devices of a Francis Picabia, a Giorgio De Chirico or an Alberto Savinio. Perhaps this flat-footedness is part of the appeal, a further lowering of the limbo bar. Hermann Broch states in his pioneering 1933 essay, Notes on the Problem of Kitsch, that kitsch is the result of the effects of the industrial revolution on the middle class, and the resulting perversion of the “Romantic.” This condition is brought about through the commodification of sentimentality and the fluent use of mechanisms designed to arouse the desires for romantic love, spiritual transcendence and the struggle for individuality. In short, kitsch is a knowing art that plays the heartstrings for hard cash. Perhaps then, the best kitsch is not being produced by the likes of Condo, Kippenberger, or Ashley Bickerton, who with a wink and a nod, tease us with their intentional trickster shenanigans, but is instead the work of those “holy shamans” of the art world who create in a more open aesthetic system and haven’t the vaguest idea they’re creating kitsch.

It seems kitsch, like our own universe since the “Big Bang”, is constantly expanding and with Richard Wagner, by Broch’s reckoning, as the greatest of kitsch artists, perhaps that’s not such a bad end of the galaxy to be in.

Dance in the Making

This conversation between Diana Vishneva, Anna Yudina, and Olivier Berggruen explores the evolution of dance, seen from the perspective of an “art form in the making,” to use William Forsythe’s memorable formulation.