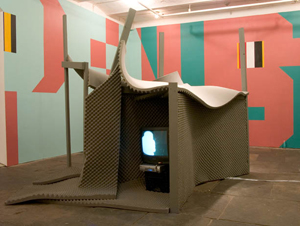 SHIT HAPPENS/“In Search of the Miraculous, Continued…,” the two-person exhibition of Garry Neill Kennedy and Joanna Malinowska, pairs two artists whose work resists the proverbial Easy Read. Both artists make art that responds intellectually and perceptually to the conditions of its site. Kennedy, a well-known figure in the Canadian art world, takes for his site the interior of the gallery. For the gallery Canada,* he produced an elegantly exuberant system-based wall painting, reminiscent of the work of Daniel Buren and Lawrence Wiener. Malinowska chose artmaking sites ranging from the exotic (a remote location on Baffin Island) to the everyday (the D Train as it passed over the Manhattan Bridge). Her contribution to the show consisted of a rough, honeycombed “hut” made of soundproofing foam and 2×4s that camouflaged stacks of equipment and looped videos.

Using the tenets of system-based painting, Kennedy transforms the white cube into a space that dazzles with the graphic confidence of late-Modernist abstraction and the combustion of agitprop. Set in a blocky, stylized font called “Superstar Shadow,” the phrase “SHIT HAPPENS” is painted in gigantic letters that span the entire gallery from floor to ceiling. The phrase is indecipherable at first glance. Instead, flat, hard-edged shapes of red, beige and green draw our attention to the quirky architecture of the room. The commercial house paints in Kennedy’s palette are selected for their tasteful, complimentary hues as well as their evocative product names (“Persian Gulf,” “Persian Green,” “Arabian Night,” and “Arabesque”). Punctuating the wall painting in various locations, large squares composed of bold, patriotic stripes key us into the artist’s intention: these are the oversized replicas of the commemorative medal ribbons awarded to the U.S. military for duty in the Global War on Terror and Service in Iraq. Kennedy reinvigorates the connection between politics and abstraction by using the pleasant, domesticated Orientalism of home décor to foreground the pumped up signs of a futile war.

Kennedy’s meticulous wall painting acts an astringent foil for Malinowska’s flirtation with chance operations. Paying homage to the mythic performance artist Bas Jan Ader, “In Search of the Miraculous, Continued…” is comprised of four loosely related videos. All four works investigate the artist’s own relationship with the unexpected and commonplace, playing the thin edge between the random and the staged. “Part I” shows an “accidental” encounter outside of Carnegie Hall between a glamorous woman and celebrated pianist, Piotr Anderszewski, who becomes an unsuspecting actor in Malinowska’s drama. In “Part III (Preaching Avant Garde to a Commuter),” a woman resembling pianist Margaret Leng Tan “plays” John Cage’s 4’33” on a toy piano to a car packed with oblivious subway riders. “Nunat Erucilkai – A Village Without Daylight” closes in on the irregular pulse of an energy-saving light bulb being manually switched on and off. Looking like a parody of early abstract art film or a light experiment by Moholy-Nagy, the common, florescent coils mysteriously glow and fade into the darkness as a strange, disembodied voice retells an Inuit folktale in the Yupik Eskimo dialect. In “Part II,” one continuous shot bears down upon the incandescent landscape of the Canadian tundra. Center screen, a solar-powered boom box plays Glenn Gould’s “Goldberg Variations.” The artist’s sly preoccupation with the conditions of art making is beautifully encapsulated here. In hopes that future travelers might stumble across this gorgeous piece of music, Malinowska has planted a flimsy piece of technology deep into an unforgiving landscape. Whether the boom box has already broken down or has miraculously recharged itself, broadcasting Glenn Gould into perpetuity, we will never know.

*It’s no coincidence that Canadians exhibit so often at Canada. However, there is no relationship between Canada, the gallery, and Canada, the government.