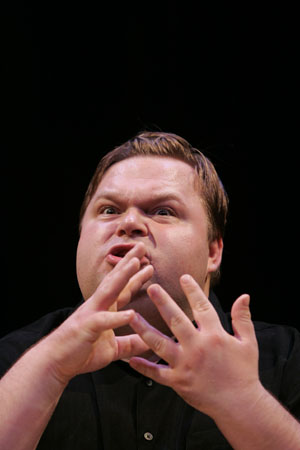 “I love technology,” declares actor Mike Daisey, “but I love even more the definition of technology which is not complicating things, but using the tools to do what you actually want to do.” That might explain why, though Daisey has an abiding fascination with the technological (he writes for Wired and has examined the dot-com boom, the New York City subway system, and inventor Nikola Tesla in his solo performance shows) he sees no contradiction in performing on a nearly-bare stage with no props to speak of. His vision of technology, he says, is simply “tools that are used to do a job effectively.”

The job in question is his newest work, a monologue series entitled “Great Men of Genius.” Daisey is speaking from Seattle, where the show’s four installments have just premiered at the Capitol Hill Arts Center. The production comes to Williamsburg’s Galapagos Art Space beginning May 5, when, over four successive Fridays, Daisey will chronicle the lives and times of four “geniuses”: Bertolt Brecht, P.T. Barnum, Nikola Tesla, and L. Ron Hubbard.

Daisey’s inspiration for the format of “Great Men of Genius” is distinctly un-technological. He has long wanted to perform a nineteenth-century-style lecture – using the “sleek narrative of theater,” he explains, “so it’s not actually a lecture, people don’t actually fall asleep.” Consequently, he shifted from mainly autobiographical work – most famously, 2001’s 21 Dog Years, about his time as an Amazon.com slave – and, drawing on his experience as a storyteller (he has performed frequently at The Moth), created a new form he is calling the “bio-logue.”

Still, Daisey doesn’t stray far from his own life; his selected “geniuses,” he explains, are mainly the objects of his personal obsessions. But the show considers its subjects’ brilliance as a central conviction, not as Daisey’s own predisposition, prompting audiences to consider the nature of genius itself. “Is genius an actual force,” asks Daisey, or “is it just a title we use to award to people [who] might win ‘best in class’? There’s an element of social hierarchy, but there’s also a touch of the divine ­– when people do things that are so hard to conceptualize.” 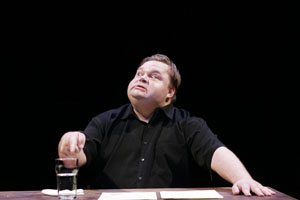 Along with touches of the divine, Daisey explores his subjects’ streaks of insanity, particularly that of Nikola Tesla, whose battles with Thomas Edison Daisey tackled in 2005’s Monopoly!. Here, Daisey examines the nuttiness that pervaded Tesla’s later years when, stymied by Edison’s efforts to control electrical innovation, Tesla turned to other inventions such as a death-ray, and ultimately fell in love with a pigeon whom, Daisey explains, he believed could communicate with Mars.

The “Brecht” evening, meanwhile, explores parallels between the German playwright’s life and Daisey’s, comparing Brecht’s relationships with the women in his life – often said to have penned much of his dramatic material – and Daisey’s collaboration with his wife and director, Jean-Michele Gregory (which, he notes, is vastly more functional than Brecht’s). His fascination with Scientology founder L. Ron Hubbard comes from Hubbard’s success in leading an “almost entirely fictitious” life and in fusing a religious and business model into the template, he says, for many more recent cults.

Taking a cue from Brecht, Daisey envisions the monologues adding up to an “epic” look at genius as embodied by four brilliant eccentrics over the last century-plus. But despite large-scale ambitions, Daisey’s rehearsal process is as spare as his performance style. After researching his subjects, he debriefs with Gregory on the day of the performance, then retreats to write an outline. He “births” the show onstage, before an audience, recreating and revising with each subsequent performance.

This low-tech method meshes naturally with Galapagos artistic director Travis Chamberlain’s vision for the Evolve series, in which he takes a rock-and-roll approach to theater, selecting artists looking to build their fan base and make some cash – and happy to perform in an unfinished space with little in the way of set or lighting. Daisey’s extemporaneity also takes the mandate to “evolve” literally – another merit in Chamberlain’s eyes. Daisey, explains Chamberlain, “is from the Spalding Gray school of storytelling—meaning he revels in the improvised aspects of his craft.  He doesn’t just recite lines.  He is actively engaged with his audience and feeds off their ebb and flow… He embraces spontaneity on stage—and that is totally rock n’ roll in my book.”

Ultimately, this is why Daisey performs live, without scenographic frills: “Monologue is a great thing for theater because it’s a great tool,” he says. “When people are actually speaking to you, without a script of any sort, that is something you cannot get from a DVD, in a film – that’s difficult to get anytime in life, seeing someone be truthful at length about things they’ve thought about.” It’s a straightforward formula – but for Daisey, it’s the tool that does the job most effectively.

Great Men of Genius will be performed every Friday in May at Galapagos Art Space, 70 North 6th St., Williamsburg. For more info visit galapagosartspace.com/theater.html.