Other People’s Lives by Ray Davies 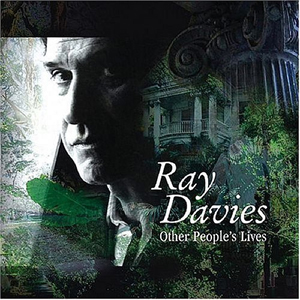 Hugh Hefner had his reasons for not “going pink”—showing pussy—in Playboy. Then Bob Guccione came along, with his own reasons for showing it, and pussy became overdetermined, part of the shinyl-vinyl. Imagination? Extraneous.

Ray Davies is showing a lot of pink himself these days—not writing explicit lyrics, but shining too much light on meanings he once left his listeners free to infer. On his debut solo album, Other People’s Lives. That’s sad, because his subtle lyrics, with their open-ended allusions and quick, funny transitions, were what always set Kinks’ songs far above the riffs-and-hooks crowd. Think of “Waterloo Sunset”: Did Ray ever come right out and say that the guy never leaves the house? What he observes of/projects onto Terry and Julie is told, in part, by the actual structure of the song:

I am in paradise…

They are in paradise

You made the connection yourself and making it was one of the pleasures of listening to those songs. In This Is Where I Belong, did Ray ever say where it was that he belonged, or why? No. But there he was, big and awful, and he wasn’t leaving. Even those “ohhhs” on the fadeout, they were halfway between the singer’s exaltation and his partner’s keening lament. The production was always subtle and eloquent, in tandem with the lyrics. On the ubiquitous Lola, for instance, have you ever noticed the premier appearance of Pete Quaife’s bass? It comes in when Ray first spells Lola’s name, about thirty-five seconds into the song, after the acoustic guitar, banjo, and drums. Then it drops out immediately but comes back a few seconds later when the guitars kick in. It’s like the bass did something to you when you weren’t looking: It created foreshadowing, like a mysterious masculine rumble—the “dark brown voice”—underneath everything. Ray never wrote down to you, except now.

The songs on the glossily produced Other People’s Lives speak of hard-won truths, epiphanies wrested from the hands of excess, but the overdetermined, pedantic lyrics undercut the eloquence and mystery of those revelations. On Things Are Gonna Change, Ray says, “The barrier we cross/Is somewhere between heaven and hell,” and “When reality bites/The morality kicks in.” True, but I think I might’ve heard Oprah say exactly that to John Travolta five years ago (maybe quoting Deepak Chopra?). After the Fall, which immediately follows, echoes those lines: “When morality kicks in/Who will catch you when you fall?” The bittersweet is a shadowy thing of personal yet universal recognition—desire and regret constantly shading into each other—and it’s just too garishly illuminated here. Similarly the title track, a media slam in the manner of Joe Jackson’s “Sunday Papers” and Don Henley’s “Dirty Laundry,” is a broad caricature that doesn’t define the aims of the album (which are better defined by Things Are Gonna Change). Its refrain, “Feed the reporter…Read the reporter,” doesn’t even seem like something Ray Davies would write. The Tourist also covers the familiar—the old “jaded traveler” motif—in a bald, bland way: “Just another tourist checking out the slums/With my plastic Visa, drinking with my chums.” But compare that with Holiday in Waikiki (from the Kinks’ 1966 album, Face to Face), which approaches the motif from a slightly different, much funnier, angle:

Across the coral sands I saw a hula hula dancer, looking pretty.
I asked her where she came from and she said to me,

“I come from New York City,

And my mother is Italian,

I’m just an English boy who won a holiday in Waikiki.

That transition from “My dad’s a Greek” to “I’m just an English boy…” is quick enough for you to make the connection yourself, without a nudge to show you where to laugh (or a soapbox to declaim the already obvious contradictions).

Speaking of laughs, Stand Up Comic, with its echoes of Ian Dury, ironically provides few, if any:

And William Shakespeare is the schmooze of the week

And anyone who says different is a fuckin’ antique

This, from the guy who wrote “Willesden Green” (from the 1971 Percy soundtrack) and spoke/sang it like a cowboyed-up Elvis:

Well, I tried to settle down Fulham Broadway
And I tried to make my home in Golders Green

But I gotta get that train

And go back home again

Oh, how I miss the folks back home in Willesden Green

(In the March issue of Mojo, Ray blames Stand Up Comic on his alter-ego, Max, the narrator of X-Ray, Davies’ “fictional autobiography.” Maybe Max needs a fictional restraining order to keep him away from the recording studio.)

Still, there are moments. In The Getaway (Lonesome Train), with its “Born on the Bayou” guitar gently twanging in the background, the connections are subtle, yet exceedingly clear:

In a suburb somewhere someone’s quietly planning their getaway
Traveling light, in case they might get a change of heart

It’s the bravest move they’ll ever make, but they have to make the break

That’s the risk that they take…

And likewise in the charming and truly bittersweet Thanksgiving Day (written after spending the holiday in the U.S.):

Innocent days when they both looked forward to that

And all over America people are going home

One of the most interesting things about the album is that its songs were written before Davies was shot in New Orleans in 2005 chasing a mugger who’d grabbed his girlfriend’s purse. Some of the lines—“My turn to get pushed in the face” (Things Are Gonna Change) and “I just had a really bad fall/And this time it was harder to get up than before” (After the Fall) — are eerily prescient. But isn’t that the nature of transitional moments? Don’t we always see them coming, out of the shadows of our understanding? And in their wake understanding itself may show its face:

I know it’s not the same
And everything changes

But behind front doors people think that they can hide

We win and lose, we laugh and cry

Live and learn, at least we try

Oh, give it a try

(from Next Door Neighbour)

Other People’s Lives also communicates that things aren’t what they used to be—they’re a lot worse, and it’s all our fault, though there’s always room for hope and deliverance if we can just be honest with ourselves. True, but I wonder if Ray didn’t say this just as well, if not better, back in ’66:

Well, yesterday was such an easy game for you to play
But let’s face it things are so much easier today

Guess you need some bringing down

And get your feet back on the ground

Won’t you tell me

Where have all the good times gone?

I. There is a small park in the South Bronx, adjacent to the larger St. Mary’s Park that for a long time had a simple mural that read “I-Am-Park.” I always noticed and admired it as a clear affirmation of presence. I am park. Since I moved to the Bronx in 2014, there has been a push for gentrification and development both by the city and private enterprise. Things go away when there is development. This displacement, the impermanence of things, is one of the reasons I make my large scale rubbings.

Maggi Hambling, age 76, has her first solo show in New York. This dumbfounding development for one of England’s most important artists can be chalked up to the usual reasons: a suspiciousness of, until recently, figurative art and especially portraiture; a bias against female artists; and a bias against British post-war artists not named Bacon, Freud, or Hockney.

Garmenting: Costume as Contemporary Art is an ambitious exhibition that occupies two floors of the Museum of Art and Design. Curated by independent scholar Alexandra Schwartz, this show is long overdue for several reasons.

February 22, 2022 marks the release of Ultramarine, the third volume in Wayne Koestenbaum’s trance poem trilogy. This project, which began with The Pink Trance Notebooks (2015) and continued with Camp Marmalade (2018), is remarkable for many reasons, not least of all for the distinct tonal differences (or: colors) between the respective volumes.