Cutting the Transcultural Rug: An Evening with Robert Farris Thompson 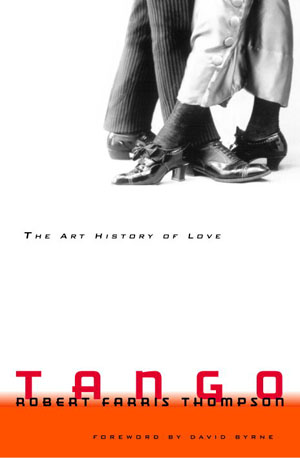 Drafted into Fort Dix after the Korean War, Robert Farris Thompson heard the Seventh Army needed a historian and volunteered. “I didn’t tell them I was a historian of mambo,” said the master of Yale’s Timothy Dwight College. “Otherwise, I might have been a gunner’s mate on the Czech border.” A habitué of New York’s multiracial, transnational Palladium while earning a doctorate and later a professorship at Yale, Thompson is now Colonel Trumbull Professor of the History of Art, fluent in languages from Spanish to Ki-Kongo, with books including the Africanist wellspring Flash of the Spirit. Charles Keil, whose Urban Blues had already spotlit B. B. King in 1966, said that while he was at Yale Thompson “was nuts about figuring out African art,” while Robert Palmer (Deep Blues) felt Thompson “had anointed him to do the work he was doing,” according to Ned Sublette, whose Cuba and Its Music was 2004’s ethnomusicological blast.

With the publication of Tango: The Art History of Love last autumn, Thompson gave that century-old, planet-wide phenomenon its black spring, detailing roots in Montevideo’s candombe rituals and black gaucho milongas out on the pampas. Kongo precedents prep the dance ground, then a knife pegged in the floorboards serves as razor pylon while 1930’s tanguero Cachafaz bests rival El Negro Santillán. Tango returns the drumless music formulated in South America’s whitest land to the hands of black innovators such as bassist Leopoldo Thompson, who fueled legendary orchestras led by Firpo, Canaro, and de Caro, and Horacio Salgán, whose hot sound spiced with arrastres—slurred low notes that incite the dance—spurred Ella Fitzgerald to initiate Salgán’s1965 disc, Buenos Aires at 3 a.m. Tango’s pantheon thrived on such veins: Thompson writes of giant Osvaldo Pugliese’s “La Yumba,” which “rattled the landscape…mixing Stravinsky-like rhythms, an indirect ‘Africanism,’ with rich, yearning passages suggesting the blues.” Pugliese borrowed the title of his 1946 smash from candombe: “Yumba is a holy word in Kongo…which compares to the Ki-Pende imperative ‘Umba!’ (‘Dance!’), not to mention rumba in Cuba.” Manic fans hollered “¡Al Colón!” demanding Pugliese’s place at Buenos Aires’ famed opera house; with democracy restored in the mid-eighties, they got their wish.

Thompson recalled his 1990 foray to Buenos Aires over a February dinner with salsero Larry Harlow at New Haven’s Union League Club, before Harlow played a lively student get-together in Thompson’s vast living room. Anthropologists Alejandro Frigerio and María Julia Carozzi took him to Café Homero—“That’s like it’s 1944 and somebody said ‘I’ll take you to a place called Minton’s [bebop’s Harlem birthplace].’ Roberto Goyeneche, the Sinatra of tango, was singing ‘La vida es una herida absurda’—‘Life is an absurd wound’—and I thought, My God, this stuff is heavy!”

By 1995, mambo and tango chapters in Thompson’s projected New York: Secret African City had ballooned into books. “I put myself on the lecture tour to get money: Give a lecture, go to Buenos Aires, give a lecture…I went to a funky neighborhood place called Sin Rumbo”—named for the racehorse No Destination, whose winnings funded the café. “I asked this tremendous jammer, Lampazo, ‘What does your nickname mean?’ He said, ‘Sweepy.’ That sounds like hip-hop: ‘Sweep your ass off the floor.’ He invited me to his birthday party; the aristocracy of tango was there. A black woman over there…black dude: There are blacks in Buenos Aires. The wildest two, Facundo and Kely, said ‘You should meet some of the top black dancers.’

“They invited me to their townhouse; here is this dude, Anzuate, who’s 72. His feet moved a half-inch at a time—I’ve never seen anything more subtle. Anzuate sent me way up in the northern barrios, to the epicenter when tango morphed, playing those weird intervals like Miles Davis.” Thompson frequented the Palermo neighborhood’s Club del Vino: “One way I built this book was jazz rule No. 1: Hang out. It’s so civilized, and the women will knock you out—make you cry. Once you sit a tanguero down, they go off like rockets. Nestor Marconi plays bandoneon [tango’s smaller accordion], and I asked, ‘What’s the difference between milonga and habanera?’ He says ‘Milonga is an habanera in a state of sexual excitement.’

“Tango and mambo have come in very different ways from very Kongo roots, where they have this concept of nzéngolo, where you cut to make a pose. Tango is full of poses. The girl goes zoom! between your legs—in the vacunao in the rumba guaguancó, you look for an in; if she’s not quick enough to do this [feints], you get to the thigh, and her hips. That’s been taken a lot farther in tango…” Sonic connections are as telling: “In rumba, you want a nice bass note, [there’s] that wall over there…In early milongas, they played tables, floors. A particular milonga, ‘El Esquinazo’—‘Left Standing at the Corner’—had [strikes knife on plate] at the beginning. This poor dude ran the most popular bar; one night everybody got drunk, turned everything into percussion: broken plates, broken chairs. Next day, a sign said ‘It is strictly forbidden to play the tango “El Esquinazo”; we appreciate your cooperation.’”

Thompson paraphrased Juan Álvarez, from 1908: “‘Habanera, milonga, and tango are black creations, still being performed by blacks.’ For Six Strings: Here was Borges writing milongas. One leapt off the page: ‘For Persons of Color.’ Another is about this black dude, the greatest lover in his barrio, blown away with a single bullet, but Borges makes sense of that: He didn’t die in vain, he exalted us with his lifestyle.” Tango, still nascent as the twentieth century dawned, pulsed with immigrant opportunity; its greatest voice, Carlos Gardel, “was born in Toulouse—his first name was Charles Gardès. What an instinct: Gardel takes ‘él,’ the masculine pronoun, and puts it in his name. In his most famous tango, ‘Mi Noche Triste’—‘My Sad Lonely Night’—he hits two words with Arab melisma.” Gardel copped Moorish tinge from gauchos, a link backed by tracing alfajor, the Argentine pastry, to Arabic alfahua (“honeycomb”).

In an email, Alejandro Frigerio, Thompson’s constant guide, wrote of a demonstration of “rare and ancient” canyengue by masters Rodolfo and Maria Cieri, just months before Sr. Cieri fell ill and died. When they concluded, Thompson, “who had been very enthusiastic throughout, was in tears. He had clearly seen, while they danced, ‘a line of ancestors going back’ to black roots.”

The score first titled “Mambo”—by legendary Cuban bassist/composer Orestes Lopez, brother of Cachao—hangs framed on the Master’s House stairwell, and it’s hardly a leap from Tango to Thompson’s coming mambo volume. “Two basic steps of tango are corte—the quick stop—and quebrada—the break, down to a lower stance. In mambo and salsa, it’s cierre, the sudden stop, and then, again, down-breaking. Take Palladium king Tito Rodriguez: There was a film where his whole band broke, prone on the bandstand.” “They would fall down,” Larry Harlow confirmed. “The whole band,” Thompson said, bedazzled a half-century later. “One night, it was almost closing time and a dude grabbed the conga then started chanting: ‘Aguacero de mayo [‘May showers’].’ I wrote: ‘Perhaps this has reference to the religions in Cuba.’ Cut thirty years to 1985: I’ve been assigned to interview Toni Morrison, who said, ‘My mama said you should jump out in the first showers in May’—and I froze. Lydia Cabrera, the queen of Afro-Cuban anthropology, wrote: When you prepare the prenda, the Kongo charm, one ingredient may be rain from the first showers in May; it comes direct from God.”

In the scene’s heyday, Thompson had “a foolproof test with women: If they were excited by the Palladium, they were on. A lady anthropologist freaked out [over the vibrant cultural diversity at the venue]; Machito was playing and she said, ‘The gaiety of nations!’” Recalling the dancers, Thompson says that the finest ones wore “cold, frozen faces—cara fea—they don’t give you an obscenity-eating grin! One outsider said ‘No smiles?’ This woman with her date in a Chesterfield coat said, ‘They dance miles apart!’ I owe her a debt; later I developed this idea of apart-dance as one of the main traits of true black music. It’s strong [apart], but people can come back to the embrace. Mambo is apart-dancing; Lindy, when it got hot—boom, you split. But when the bolero came—” Harlow interjected: “She said, ‘Could you dance a little closer?’ ‘If I get any closer, I’ll be in back of you!’” “It’s so stupid,” Thompson concluded, “that Western proverb about ‘You can’t have your cake and eat it, too.’ You buy two cakes: mambo and bolero.”

(Robert Farris Thompson is working on a history of mambo, tentatively to be published by Pantheon in 2008. In autumn, parts five and six of this series will survey Cuban bandleaders today in New York, and trace the advents of timbales and trap drums in the Afro-Caribbean rhythm spectrum.)