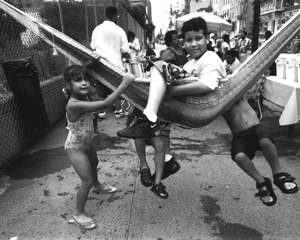 For reasons that remain a mystery even to myself, at various times during the past year I’ve found myself settling down for the evening with Lou Dobbs and Bill O’Reilly. (I prefer to watch them on the same evening, starting with Dobbs at 6 PM and using the dead time from 7 to 8 PM to steadily vomit into the toilet, cleaning up just in time for O’Reilly’s self-important “memo.”) Lately, the two hours of my life I relinquish to these men has been rewarded by their projects to unearth new evidence about the ongoing destruction of our country wrought by undocumented immigrants. Fun stuff.

They, of course, are by no means alone; each man is standing upon the shoulders of Americans across the country that spew anti-immigrant vitriol at the least provocation. Through reporting out various stories I’ve seen people upset about the notion of an “illegal invasion” at our southern flank, and spent a week with the Minutemen last year on the US-Mexico border, bullshitting in the hot sun and playing night games with flashlights and rifles. I’ve interviewed housewives from Southern California that became crimson when explaining how they had recently overheard a conversation in Spanish at the grocery store, even clipped a coupon or two that were bilingual. Others, of the more conspiratorial bent, have spent hours explaining to me the Mexican government’s plan to reconquer parts of the US for Mexico.

So when the topic turns to immigration, I’m accustomed to people being angry.

But the anger has reached a new fervor, in the wake of the multiple (and multiplying) protests that have swept our nation in opposition to anti-immigrant legislation. It’s not just the scale of the events that are provoking such fury; something more threatening is at work. What we’re seeing in the backlash is a reaction to the breaking of a psychological barrier. White America is being forced to rethink how much it knows about immigrants (which, in this case, is shorthand for Mexicans), and it is proving to be a painful process.

Here’s the rub: immigrants are supposed to be scared. Sure, maybe not all of them are child molesters or drug dealers. Maybe most come to provide for their family; this, even among some of the “build a massive wall” persuasion, seems understandable. But while they’re here, they’ve supposed to be frightened, meek, submissive. They cower in the shadows, wash dishes for minimum wage, feel unending gratitude at the opportunities provided by our beneficent country.

Anthropologist James C. Scott has an intriguing idea that can help better understand what has been taking place over the recent months regarding immigration. In his book Domination and the Arts of Resistance, Scott writes of the “public transcript” and the “hidden transcript” that coexist in societies with lopsided power arrangements. A slave owner, for example, might look out on his plantation and see only docile slaves that do what he orders, that bow at the appropriate time. Each time the slaves adhere to the public transcript by genuflecting, the owner thinks that he is in control, that his slaves happily accept their role. A cursory glance at the situation might compel an observer to believe that the public transcript is all that exists, that the slaves actually believe in their master’s superiority, and understand their “appropriate” position.

Yet even within extremely unjust societies where all appears well and stable, Scott effectively argues that a deeper analysis will find autonomous zones within the oppressed society where they rebel against their position—call the master nasty names, for example—if only among themselves. This he calls the hidden transcript, the behavior that the oppressed keep safely out of view. Eventually, however, a slave comes up from behind the slave owner and lops his head off, and thus the hidden transcript is revealed. They weren’t so happy after all.

The mainstream media has done a poor job of capturing the complexities of the immigrant experience. The public transcript of immigrants—for example, how they have been portrayed in the news—has traditionally relied on a tired narrative lacking any sort of nuance. Even well meaning journalists can fall into the trap. I imagine beat reporters hitting the street, notebook in hand, anxious to dig up usable quotes for their stories. I imagine thousands of reporters asking—perhaps many through a translator—the same leading questions that fit into their simplistic framework. “Are you scared?” “Do you work hard?” “Do you love this country?” The stories that get filed, though well meaning, create a caricature of immigrants: the immigrant as intimidated, USA-loving monolith.

But no one is so simple. Yes, they come here for the economic opportunities they can find, but this doesn’t prevent them from feeling critical towards their new country of residence. Yes, they are afraid of being deported, afraid of losing their job, afraid of complaining to the city when a landlord won’t provide heat. But they also act despite such fears—and some people I know seem genuinely fearless, despite being in the country illegally. Immigrants have their own hidden transcripts—their critique of bosses, of the economic exploitation they face, of the callous landlords—even though they might often choose not to share it with Anglo reporters.

By going out into the streets, immigrants have challenged the overwhelming profile drawn of them in the media as a fearful people, resigned to the shadows. Opponents may be apoplectic in the face of brown-skinned neighbors, but they at least had the comfort of believing that these people were subservient and scared. The New York Times in mid-April quoted a restaurant owner that had fired ten people for missing work in order to join a march in Florida after he had explicitly warned them not to do so. “Couldn’t they have protested in their hearts?” he asks.

That we can handle, a protest in the heart. Keep the hidden transcript hidden, dammit.

Well, no longer. What is happening now is a surging grassroots movement, without the need for leaders, which is collectively transforming what has been a hidden transcript into a public one. Despite threats of deportation, immigrants have risen publicly to condemn the anti-immigrant movement. Even more than that, they are making a strong stand in opposition to the way that the country has treated then, and making an implicit critique of the income and wealth inequality that pervades it, and about race in America.

This is a hard pill for many to swallow, as it forces us to look again at our condescending notions of immigrants as an infinitely grateful, subservient lot. And like the slave owner who realizes too late that a machete is coming down on his neck, Americans have witnessed a wholly unexpected movement led by immigrants who have come out of the shadows, without first politely asking for permission. Even some immigration advocates are starting to worry about such militancy, afraid that the images of people waving Mexican flags or in other ways showing less than overwhelming love for the US will turn off white citizens. A week and a half after she addressed the New York City immigrants rights protest, for example, Hillary Clinton called for building a wall along the US-Mexico border. As politicians move all over the map, the protests will, too—for this movement is impossible to control, too energized at the base. And we’ll never be able to look at immigrants in the same way, which is a beautiful thing indeed.

Bill Jensen and Bill Goldston graduated together at the University of Minnesota. Both moved to New York in 1971, Jensen as an artist, and Goldston as a master printer at Universal Limited Art Editions. In 1982 upon the passing of Tatyana Grosman, owner and director of Universal Limited Art Edition, Goldston assumed responsibility for its day to day operation and invited Jensen to take up printmaking. To date, ULAE has published thirty-eight editions by Jensen with more to come.