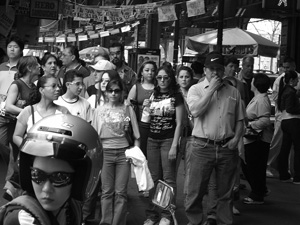 On a recent Saturday afternoon, my pal Alvaro and I set out for central Queens in order to feel the pulse of the new city. Having read many stories about the experience of riding the globalized 7 train, I was more curious about the street life below, so we got off at 74th and Broadway in Jackson Heights and began to walk up Roosevelt Avenue. Alvaro took in the sights as a tourist from Chile, who now lives in Cordoba, Argentina and Mexico City. I did so as a white American now living in Greenpoint, who was born in Chicago, the place Norman Mailer once called the “great American city.”

Earlier that week, I had asked a couple of friends—one an editor whose parents are from India; the other an artist born in Moscow—why there are relatively few stories these days about life in the new immigrant America in the mainstream press. “Because the melting pot is so cliché,” they both agreed. I took this as a challenge. I am pleased to report that the sights and sounds of the strip of Roosevelt Avenue from Jackson Heights through Elmhurst and Corona to Flushing Meadow defy easy characterizations about the immigrant experience. But along the way some new potential metaphors did emerge.

Upon leaving the 7 station at 74th and Broadway, it became immediately clear that we were now in Latin America. Jackson Heights is known these days for its large South Asian population, but along Roosevelt Avenue, the people and places are overwhelmingly Latino. This is not news to anyone who’s been to Elhurmst, or Corona, where Columbians, Ecuadorians, Peruvians, and many other South Americans have set up shop since the 1970s. But what is new is the increasing presence of Mexicans.

Fiesta Mexicana, a restaurant at 75th and Roosevelt, thus offers sopa campesina, a farmer’s soup served throughout Latin America, along with chilpachole de jaiba, a soup made of chile guajilo broth and blue crab, a specialty of Veracruz. A few blocks later, El Rincon de Jaramillo, an Ecuadorian joint, is serving up mostly national dishes, like caldo de pata, or cows’ feet soup, and caldo de gallina, hen soup. Caldo de bola, a stuffed plantain soup, is also an Ecuadorian specialty, but it would presumably also appeal to various Caribbean folks. I’m not sure who eats Caldo de Salchicha, a blood soup made of kidneys and blood sausages, but it’s definitely not for tourists.

Such varieties of Latin American specialty soups and stews are of course repeated along the strip—and no, Alvaro and I did not gorge ourselves that day. But it would be very difficult to find any of these dishes as being comparable to a melting pot. Each has its own identity—sometimes borrowing other ingredients, often staying unique. And while there are only a handful of McDonald’s and other conventional American eateries along Roosevelt Avenue, there are plenty of sidewalk stands selling tacos, tamales, rolled corn, various sausages, jicama, mangos, melons, shaved ice, and much, much more. This is making us all hungry so I think I’ll change the subject.

As we move up Roosevelt, the pulse is Latin American. The music coming from the various stores is mostly Latin beats, the people are mostly the various nationalities that fall under the designation Latino, the bits and pieces of conversation overheard are mostly in Spanish. There is, however, one older, very white woman walking along tearing down any posters or announcements on phone booths and lamp poles that advertise Colombian music events or Mexican restaurants. Upon spotting me, she interrupts her mumbling monologue to address someone she assumes, by virtue of skin color and presumed national identity, will identify with her cause.

“This is a stupid neighborhood,” she says. “It looks just like the Bronx!”

My only response was to pull out my notebook and write that one down.

I don’t share her hostility, but her sense of cultural isolation is driven home to me when I step inside of Citibank at 80th and Roosevelt. The lines for both the ATM’s and the tellers are stunning, in terms of length and variety of people. Of the approximately 125 people, both customers and employees, there are many, many different Latin Americans, some South Asians, and one white American, me. Now I suppose that the experience of being a foreign tourist in my own native country is something that I could have in, say, parts of the Bronx, but the diversity of people here in the bank in Jackson Heights is both amazing and disorienting. All of us live in the same city, but most of us don’t speak the same language or eat the same food. Our only lingua franca is the U.S. dollar.

Along Roosevelt, I am also reminded that I don’t share the same religion as many folks in these parts. In truth, I’m not exactly sure what my religion is, but the same can’t be said around here. It’s the day before Easter, meaning that it’s Semana Santa. Various colorful Easter paraphernalia abounds. At the Manuel de Dios Unanue Triangle, named after the radical former editor of El Diario-La Prensa who was gunned down by Colombian drug lords in 1994, the sounds of Pentecostalism are in the air. Loud guitars back an even louder revivalist who shouts in Spanish, “Jesus Christ is close to you.” All I can say is “¿Quién sabe?”

Mainstream American culture becomes more audible at one distinct point in Elhurmst, as we pass a Peruvian music store/barber shop, which combines a wide selection of cds in the front of the store with what it advertises as “arte en tu cabello” in the back. Outside, the store’s speakers summon passersby into the store with an eclectic mix of familiar music. And never before in my life have the words of a cheesy American pop song sounded so deliriously apt as these:

Baby, I’d love you to want me
The way that I want you

The way that it should be.

Read it—or sing it—again, and this time consider it the corniest chorus for immigrants rights imaginable. The song is by Lobo, a.k.a. Kent Lavoie, who hailed from Tallahassee, Florida. Like Los Lobos, presumably he called himself Lobo after the Spanish name for wolf. But in older Southwest slang, the term also means “half-breed.” This is headed in the direction of random speculation, so it’s time to move on.

Our journey ends at Flushing Meadow Park, a legacy of the 1964-65 World’s Fair. Here the Fair’s creator, Robert Moses, has left his physical imprint with the Unisphere (steel globe), the various Fair buildings, statues, and mosaics, and the park itself. In the circle directly beneath the Unisphere, there is an array of skateboarders, black, white, Latino, and Latina; rollerbladers, mostly Asian; and one white guy whose flying shark-kite gets caught in the Unisphere, somewhere in the Indian Ocean.

Pedaling around the perimeter is a wild and colorful Merlin-like character, a familiar face from the beach at Jacob Riis—today he’s decked out in his Easter outfit, a flowing pink chiffon outfit, his hair and beard purple with yellow and orange streaks. His get-up is even more colorful than the saris worn by the Indian women who pass by. He has a black poodle in the front basket of his bike and a gray parrot on his head. It’s not clear where he’s from, but wherever he goes, children of all backgrounds love him.

In addition to Moses, the other primary creator of the ’64 Fair was Walt Disney, whose main legacy from the Fair is the unfortunate song, “It’s a Small World.” Observing the action in and around the Unisphere on a Saturday afternoon conceivably could inspire one to whistle such a silly tune. However, the ubiquitous, cloying refrain coming from the Mister Softee truck parked nearby make it impossible to hear any other music. Alvaro and I discuss a variety of options for muzzling Mister Softee, but ultimately restrain ourselves.

Next door to the globe, of course, is the Queen’s Museum, housed in what was the New York City pavilion for the World’s Fair. Inside it is the third of my favorite of Moses’s creations (the other two being the Unisphere and the boardwalk at Jones Beach): the panoramic map of New York City. A geographical landmark in its own right, the panorama’s intricate building blocks of the city nonetheless conceal the amazing vitality of many of the streets below. But currently on the walls surrounding it is a large and impressive photo series by Jeff Chien-Hsing Liao. Called “Habitat 7,” it captures in full view the bustling diversity of the city along the 7.

That city is ultimately many cities, with little beyond the subway system and the U.S. dollar connecting all of it. In some places, Caldo de Salchicha is a more apt metaphor than the melting pot. The many cultures present here co-exist, but interact by necessity much more than by choice. But it’s this never-ending flow of new faces with new traditions that makes New York, in my view, the great American city. In the end, a walk through Queens will remind you—the sounds of Lobo, Disney and Mister Softee notwithstanding—that it’s not such a small world, after all.

During a residency in Queens in a former public school, a Korean artist trained as a painter finds herself responding in unexpected ways to the space she has been given to work in and the overwhelming sense of cultural and social strangeness she feels in New York.

In breadth and skill, insight and innovation, Dear Miss Metropolitan takes its place alongside Roberto Bolaño’s 2666 among the most profound works of literature to have emerged from crimes so horrific they became international sensations. Years in the making, emerging from a mind transformed by decades in a chrysalis, the book leaves one heaving a glorious sigh, feeling that it was well worth the wait, and harboring a secret hope that the next cocoon will crack more quickly.

Living only one street apart in a London suburb, two 7-year-olds strike up a friendship that lasts until they are 11 and one of them moves away. In the years that follow, their school careers diverge (one begins attending university, the other enrolls in a local art school) but their musical tastes are oddly similar, as they discover when their paths finally cross again on a train platform in their hometown.