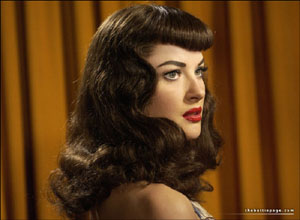 For 50 years, Bettie Page has resisted colonization within the American imagination. Dark haired, pale-skinned and New York based, she has often been called the anti-Marilyn. Monroe’s likeness and name invokes our culture’s assumptions and anxieties about sex (Trauma › Female › Sexuality › Exploitation › Death), Page’s famous face conjures little. She is merely beautiful, and recognizable. But Page, as Mary Harron’s (American Psycho, I Shot Andy Warhol) new film The Notorious Bettie Page makes clear, has a Marilyn-esque story. She suffered sexual and physical abuse at the hands of men, strangers and family alike, and suffered some disconnect where her body and her emotions were concerned.

In spite of enumerating the similarities, Harron doesn’t create a Marilyn-like tragic narrative. In Page’s case, the corrolation of sexuality and violence does not imply causation. Refuting the anti-sex message built into the trauma stereotype, the film disappoints expectations. Page’s life pre-pin-up is shown in a quick sequence of clichéd vignettes. She is abused by her father, oppressed by her fundamentalist mother, slapped around by her lug of a husband, and forced to perform oral sex on a group of jalopy-driving strangers straight out of an Archie comic nightmare. She suffers, resists each of these victimizers, even talking her way out of vaginal rape. Though Page gracefully survives each formative crisis, the back story is no survivor narrative, either. Not a victim, Page comes off as simply mundane. She reads this way because it’s too hard to process what has actually just been shown: it’s the sexual violence that’s shockingly mundane. Such commonplace suffering cannot explain such an extraordinary figure.

Harron doesn’t even try to show what turned Page into the resonant creature people came to see. The Notorious Betty Page instead asserts that not everything has or should have moral valence or narrative power. It’s a thoughtful and dissatisfying position for a film. Which is not to say the film is always dissatisfying, or thoughtful. Gretchen Mol makes a charming Page. The film also features near-perfect cinematography and fine ensemble casting. So good are these other elements, in fact, that despite Mol’s anacronistic beauty and frequent nudity, the film overpowers her. As Mol recedes, it’s easy to think that Page is a cheap device fueling an exquisite yet superficial film. But, Page is central to the film, even as she resists the narrative. Mol’s elusiveness fuels that tension.

Gretchen Mol captures the allure of Page. She presents a character lacking in both artifice and coherency, but consistently lovely. Though Page is portrayed as too naïve to suspect her bondage work might appeal to deeply troubled individuals, she is preternaturally attuned to the emotions of others. Page’s destiny finds her in the guise of an African-American amateur photographer, Jerry Tibbs (Kevin Carroll). He proposes to photograph her; she is unsure what to make of it. Tibbs backpedals, fearing she is put off by his color. With unlikely insight she reassures him, “I’m not prejudiced, I outgrew it.” While punk rock vixens continue to appropriate Page’s aura, haircut, and cheesecake style, Mol’s portrayal is more 1st-season Newlyweds Jessica Simpson than Suicide Girl.

Perhaps it’s fitting that Page resembles Simpson—our most vacant touchstone. Bettie Page may have been notorious because she bounced around in bondage gear in the 1950s, but she was successful because she was an ideal empty vessel. She reigned as pin-up queen because she could feature in dissimilar fantasies. Whatever her costume, her face was inviting and blank. Even as an icon—admired for a perceived DIY-ethos and irrepressible moxie—she’s remained defined by her absence. She has spent the past 50 years in relative anonymity. Even when her turbulent early life (and later struggles with mental illness) came to light, these tidbits have never sullied or enhanced her aura. Harron, too, keeps them at bay. When Page assures Tibbs that she’s not racist, the hackneyed dialogue makes Page seem a ridiculous stereotype: naïve Southern girl with a heart of gold. Left out is the fact that before moving to New York and meeting Tibbs, Page lived and worked in Haiti. One short allusion to this would make her open-minded attitude credible.

A credible Page would not, however, serve the film. Harron saddles Page with ill-fitting stereotypes at every opportunity. Harron makes Page implausible to keep her empty. Her emptiness doesn’t absorb our individual fantasies; it reflects back their emptiness.

The film is book-ended by the now quaint-seeming 1955 anti-obscenity hearings focused on Page’s (also quite quaint) bondage/fetish modeling. The hearings come off anti-fundamentalist and escapist at the same time. It’s charming to think anyone could be shocked by a pretty girl barely able to keep a straight face while posing with a whip. This charm makes the retro stylings of the film captivating. But while The Notorious Bettie Page revels in the superficial allure, it does not wallow in it. The film’s coda shows Page, now slightly older and a Christian missionary, approached by a man. He tells her that if she has turned to God in repentance for her modeling days, she shouldn’t worry: her stuff was “pretty tame.” The reminder asserts Page’s importance as a trailblazing sexual revolutionary, but Page’s response deflates this assertion. Disinterestedly, she explains she’s not ashamed by her past, but Jesus is her future. On film, Bettie Page disavows any connection to what she bore.

If Page were not so revered by porn stars, nude models (Playmate Barbie Benton initially revived interest in Page in the 1970s), and particularly the nouveau burlesque, The Notorious Bettie Page would not have been made. Page is emulated by a growing group of American women who equate semi-to-fully nude dancing/modeling with female empowerment. Making a choice is defined as an expression of power and making money is, by this reasoning, proof of this power. The argument is not entirely meritless, but it rests on two troubling assumptions. 1—it assumes that the personally advantageous has moral weight one way or another, and 2—that to advocate a sex-positive culture is a feminist position. It’s not. Overall, the nouveau burlesque is about as good for women as the NBA is for African Americans. Both offer opportunities for a few elite physical specimens, and daydreams for many more. Neither are substitutes for economic parity, but both provide distraction from the lack of it.

By disassociating Page from these women who admire her so, Harron is able to reject their empowerment narrative, and make Page an even more complex figure, though the film makes her life about as exciting as an ottoman. If neither those who demonize or worship her have any legitimate claim to Page, where does her importance lay? When Harron tries to answer this question, the film hits its falsest note.

When Page is put in the hands of Bunny Yeager, a female pin-up photographer, the stark black and white of the film turns to hyper-saturated color. The heavy handed assertion that the gaze of a woman is superior to the gaze of a man is hard to take, especially since Yeager shoots Page for Playboy, (the magazine which has defined the scope of the male gaze) and instructs Page to lie about her age to accord with centerfold norms. Harron throughout shows women in superior light to men. When the FBI comes after brother and sister team Irving and Paula Klaw for producing and promoting bondage modeling, Irving chooses to burn the photos and negatives, but Paula pockets them. Using the most literal of visual iconography, Harron claims Page as part of women’s secret history.

Steadfastly, however, Harron refuses to interpret this history. Harron’s Page resists making sense in and of her objectification. The message is clear: we are looking for meaning in the wrong place. With that, the film captures perfectly Page’s position in the 1950s. Entirely pleasant, Page exists to make us uncomfortable.