Things That Hang From Trees 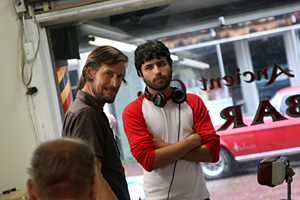 Ido Mizrahy’s first film, Things That Hang From Trees, is a meditative, rigorous, moving character study set in a dead-end Florida town at the end of the ‘60s. Tarkovsky might influence the thinking of a generation of directors, or two. But you seldom see that influence so well-digested and understood in a twenty-four year old indie director. The most mature debut at this year’s New Directors New Cinema at MoMA, … Trees features assured long takes and controlled cutting rhythms (and maybe the lamest title of the year, too). Mizrahy believes in detail—the power of the film comes from the accumulation of it over the length of the picture —and has the discipline to emphasize those that resonate. With little explanation, he demonstrates that underlying the apparently mundane natural world is another of mystery and dread. While Mizrahy’s story presentation is essentially realistic, the fantasies filling his characters’ heads drive the tale. Most drift through the film consumed by their delusions, while living out a life than refutes them.

Some critics have complained that the characters are more archetypes than human beings. And it’s true we’ve seen them before: the wise wino, the tough diner dame, the spacey sexpot mom….when Fellini used the circus and all its clichés as fantasy representations of a tougher reality beneath, the surreality of his settings made his intentions clear. Mizrahy does something more risky and complex: his archetypes live in a naturalist world. Their symbolic function is thus more concealed, but no less powerful.

The story drifts, and thus mimics Tommy’s perceptions; for him the world’s an imperfect and violent dream. Tommy’s mom, portrayed with her patented spaced-outed-ness by Deborah Kara Unger, hardly remembers that Tommy’s around. She floats through life in a Seconal haze. Her scenes with her abusive husband (Ray McKinnon, the stricken preacher in Deadwood) bring that creamy Ungerian sexuality to the surface. Less effective—and way less believable —is Unger posing half-naked in the window of her lingerie shop. McKinnon must have known a few bullies in his childhood—he’s psycho calm, desperately compressed, aching to explode and pretending he’s too cool for the rage lurking within. His violence toward his son is matter-of-fact and terrifying. Again, Mizrahy understates, and it takes a moment or two to understand just what the father wants to achieve by nearly, routinely, killing his boy. When we do understand, late in the film, Tommy’s perpetual hangdog manner makes a lot of sense.

The film is adapted from a novella of the same name and Mizrahy’s tone is literary. The film falters when the adaptation forces literary devices unaltered onto the screen, like Unger pretending to be a mannequin. It’s more effective in the character of George (Daniel von Bargen), who has pretty much the most harrowing masturbation scene in the history of cinema. The dialogue can be unusually convincing, and utilized less to fuel the plot than to capture the rhythms of folks who’ve been stuck with each other for a long, long time. The Wire’s Peter Gerety endures a few awkward set-pieces in his role as town wino Ump, but his brusque manner and committed line-readings ease him over the rough spots. Laila Robbins, wearing too much makeup, runs the town diner and, like Unger posing in her window, seems more functional than real, but her in-born air of mystery makes her a pleasure to watch.

But these are quibbles. The soul of Trees grows from a heretofore unseen matrix of Errol Morris’ Vernon, Florida and Tarkovsky’s belief in magic under every moment, even the most depraved. 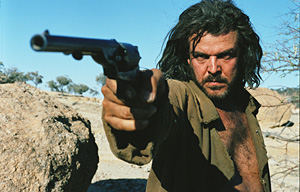 Danny Huston in The Proposition

What are the traditions of the Australian Western? Emptiness, for one. An emptiness without the redemption of the romantic vistas of the classic American Western. In the latter, the landscape always stood for America’s promise of more. The Pacific coast’s lush farmlands meant a true Grail at the end of the trail, a paradisiacal lure worth struggling to achieve. In Australia, after the void lay only more void—the Outback provided neither mythical nor actual closure. For Americans, Westerns offered a moral and human explanation of Manifest Destiny. With no parallel quest in their history, Australian Westerns are composed of tropes less of the American West and more of the American Western. This gives them a second-hand, aimless quality. But it also gives them a cool existential pointlessness, a built-in failure that both the audience and the characters recognize.

The Australian Western outlaw-hero always seems to be the same guy. In 1970’s Ned Kelly and 1976’s Mad Dog Morgan, Mick Jagger and Dennis Hopper each play an Irishman—persecuted by an unjust British authority—who robs and kills as a personal revolution. Both actors wallow in their tacked-on Oirish brogues; Hopper’s is more shameless and more convincing. Both are doomed, besotted with violence and recognize that their lives are essentially reactive. Both are presented as tragi-heroic, trapped by circumstances and to be mourned by future generations as…what exactly? Neither Billy The Kid nor The Wild Bunch, they stand for any inarticulate spirit oppressed by government with only violence as a recourse. And as enactment of that part of Australian history in which prideful, illiterate Irishmen were treated like shit by better-educated, less manly Brits.

The other Australian Western tradition is David Gulpilil. An Aborigine of impenetrable dignity and startling grace (it was his victory in a competition of Aboriginal dance that brought him to the attention of Nicholas Roeg, for whom Gulpilil starred in his debut, 1971’s Walkabout), Gulpilil played the same role in Mad Dog Morgan as he does in singer/songwriter Nick Cave’s bleak screenplay. Gulpilil’s a mostly silent, watchful, credibility-granting Tonto, the mysteries of the Outback incarnate. Whichever white guy Gulpilil rides beside automatically gains the high moral ground. Gulpilil’s presence gives his Lone Ranger primal authenticity: soul. His partner perceives what the racist civilizers cannot. In neither movie is this specified, but Gulpilil’s gravitas tells us who to root for, right off.

As Cave presents the saga, we root for murderers and rapists. Outlaw Irishmen on the run, they’re kinda/sorta more moral than the priggish English civil authorities who want them hunted down. Cave thinks he’s trafficking in moral ambiguity, but he’s as caught in American Western tropes as his predecessors. He’s clearly enamored with the regeneration through explicit bloodshed that fueled The Wild Bunch and Cormack McCarthy’s Blood Meridian. The big question is whether knee-deep Western blood can offer transcendence anymore. It might be a worn-out gesture made at a worn-out audience, or, sadly, just another piece of niche-marketing: hipster gore.

The killing is routinely imaginative, as it better be in a film like this. The characters’ relationship to their violence plays as believable, and that helps. But there’s something juvenile at work here, some more profound component missing, that’s present in Cave’s primary influences (Pecinpah & McCarthy). Guy Pearce plays a brother hunting a brother (the mega-charismatic Danny Huston), whom he never liked much, anyhow. It’s all Gothic and schematic; a classic Cave murder ballad, heavy on ironic fate. John Hillcoat directs as if Pearce’s betrayal bore great moral weight, but the point of the film is blood.

Ray Winstone’s an almost moral lawman, beset as they always are by meddling bureaucrats. Emily Watson plays another of Cave’s semi-literary conceits: a middle-class woman determined to create an oasis of bourgeois sanity in the moral/cultural desert of Australia’s boonies. It’s not clear whether her character is supposed to be quietly insane or if Emily suffered a really tough shoot. Either way, she appears as mad as a March hare and it’s distracting. Her marriage to Winstone never seems for a moment credible, and the time spent on their stylized domestic dialogue stretches before us like the Outback horizon.

Transcendence through bloodshed requires an awful lot of blood, though. The filmmakers’ unmistakable glee in the details of that bloodshed lessen the escape. That is, the purposefulness of the film’s intentions hits harder than the violence, and makes the whole thing feel unclean, somehow —too in love with its own horrors. A final over-the-top sequence that engulfs Emily Watson seems especially pointless and exploitative, no matter how annoying her performance.

When seven-string guitarist Álvaro Domene and alto saxophonist Álvaro Pérez met in Madrid, Spain in 2011, not only was the “same level of passion and hunger for real, creative, and exploratory high-level collaborative music” immediately evident, says Domene, “having the same name, rather than being confusing, to us was kind of a strange cosmic coincidence because it’s not that common of a name.”

By Gabriela Ponce and Sarah Booker

Ecuadorian writer Gabriela Ponce’s English language debut features an unnamed woman wrestling with the consequences of a failed marriage and an all consuming affair. Told in a stream of consciousness style that Book Culture describes as “like putting Viriginia Woolf and Ottessa Moshfegh in a blender,” Blood Red is a raw, visceral exploration of female bodily autonomy, power, and vulnerability.

From the start of his art making practice, Robert Motherwell worked simultaneously across media, producing paintings, collages, and works on paper in near equal measure with a remarkable consistency of vocabulary. It was, however, his early engagement with paper rather than canvas where Motherwell found his confidence as an artist.