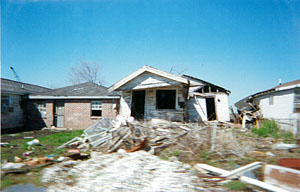 At 6:00 am on Mardi Gras day, two bonesmen from the Northside Skull and Bones Gang, a masked Mardi Gras group with intentions to scare, met in the Treme, north of the French Quarter, with a drum corps to wake up the neighborhood. As the rowdy music lured residents outside, the leader of the Bonesmen led the growing crowd to the front of St. Augustine's church. The face of the stocky African American head Bonesman was blackened then traced skeletal in white paint; he wore a smock around his waist that read “Come to Hell with Me.” In the traditional masked ceremony, the gang, and their civilian followers, enticed the Big Chief to come out of the church in the heart of the neighborhood. In a suit of feathers befitting Treme's most important Mardi Gras Indian, the Big Chief, one of many African Americans dressed for Mardi Gras to honor indigenous peoples of the region, emerged on the front step of the church as the band quieted. It was from this spot the Chief delivered an invocation layered with code phrases, and the reminder that in the midst of a hurricane, "it was I who made the sun shine."

The band struck up again, and Big Chief and the Bonesman traded playful, if not melancholy, insults. “Ashes to ashes, and dust to dust. You better straighten up before you see us. Skull and bone gang – you're a dead man waaaalkinng!” Bones shouted, smiling, to the Chief, over the drums. “You're a dead man walking.”

Six months after Hurricane Katrina slammed into New Orleans, on the dawn of the city's famed bacchanal, these chants could be taken literally. New Orleans is now a place marked by absence: the absence of the 1,100 who died because of the storm and negligent government response; and the absence of those thousands of residents – whole families, entire neighborhoods – who remain scattered in towns across the country. Many of the city’s wards are bereft of activity, sodden with the physical wreckage of the storm; these areas could be permanently underwater depending on final reconstruction plans. Who returns and who gets to rebuild is unknown, but the contours of the future were visible on the first Mardis Gras after the devastating 2005 hurricane season.

For city residents who’ve come back, reconstruction services are well advertised. Throughout the Lower Ninth Ward, Gentilly, Lakeview and other neighborhoods destroyed by the hurricane, the city's new class of contractors offer demolition, gutting, dehumidification, sheet rocking, roofing, and tree and mold removal. But the recovery effort is market-based. Income and wealth determine who is rebuilding, rather than tenure in the city, roots in the community or any other criteria that might recognize residents’ claims on a particular address, block, neighborhood.

The Lower Ninth remains basically empty, a warren of houses loosened from their foundations, with stacks of debris and rotting wood pushed aside roughly marking out streets. Empty churches and bars are reminders of the community life that has been eviscerated. Each building is marked with a spray-painted insignia from the search and rescue operations: an X crossing the threshold of the house, which served as a means of crude communication between rescue workers looking for survivors, pets, and corpses. Some homes bear the tag "No Dead Bodies." Disaster tourists with handheld cameras cruised the makeshift streets, raw images from neighborhoods in rubble apparently beating Bourbon Street amateur debauchery for hottest homemade movies this Mardi Gras season.

Some homeowners, however, are slowly filtering back into the area. Slogans like “We’re Coming Home” are spray-painted on the sides of houses in the harder hit areas, a serious declaration meant to ward off displacement. “They are discouraging us from coming back,” Roy Dillon, a middle-aged African American from the neighborhood, told me outside of his home just off of Clairborne Avenue. A resident of the Ninth Ward for 16 years, with a network of family and friends in nearby houses, Dillon now drives 12 hours from Brunswick, Georgia to keep an eye on his property. Dillon explained, “I don’t know what these people are planning. It’s just sad that we got to work so hard to get back what’s ours.” Mardi Gras 2006, he said, was bullshit.

“Whoever let the Americans into New Orleans should be hung,” Hassan, my friend and host for the weekend, muttered under his breath, threading us quickly through a swaying and drunk crowd in the French Quarter. Get Louisiana out of American jurisdiction, Hassan argued, and into a new relationship with the Spanish crown or the French Republic, proposals that were in his mind at least as serious as any of those being floated for the city’s post-Katrina recovery.

I first met Hassan in Chicago, where he sought refuge after Hurricane Katrina. Hassan, a 33-year-old African American, was born and raised in Los Angeles to parents who themselves had fled New Orleans a generation earlier, worn out by the South’s intense racism. Having grown up with Creole culture so present in his life, he was inevitably drawn to Louisiana as an adult. Nine months after Katrina, Hassan was now back in the Crescent City trying to remake his life, working in a hotel and sleeping on a friend’s couch in the upstairs room of a shotgun shack off Decatur Street in the Marigny neighborhood.

“There are so few locals here. It's the same racist shit going down every day. The little old white folks Uptown are ecstatic,” Hassan said. “They want to do everything in their power to keep those who are disenfranchised because of the hurricane to continue to be disenfranchised so they can regain control of the city of New Orleans.”

The official Mardis Gras parades rolled through the Uptown, the Garden district and other parts of the city that hug the high ground and were thus relatively unscathed by the floods. Unlike in the Ninth Ward, here residents are living relatively normal lives once again, many of the houses look fine, and stores and bars are open for business.

That afternoon, members of the Zulu Social Aid and Pleasure Club, one of the oldest and most prestigious African American-led krewes, perched on the tractor-drawn floats and passed through the south end of Mid City, before turning toward downtown on St. Charles. The krewe throws Zulu coconuts, plastic trinkets like much of the rest tossed from the floats, but only rarely. Unlike the beads, members of the Zulu krewe save the coconuts, rarely throw them into the waving crowd. Or at least they used to throw them. Now the coconuts are distributed by hand, liablity and lawsuits always paramount, passed from the float to whoever is lucky enough to be handed one.

"This is the one time out of the year Black folks could throw coconuts at the heads of white folks," Hassan said, irritated at the docility of the crowd.

For visitors in town for the celebration and those whose homes and livelihoods remained intact after the storm, much was consistent with Mardi Gras of years past. The Bourbon Street crowd drank to excess; paradegoers camped out in the spots they’d claimed for years to catch beads and watch floats sponsored by the Proteus, Bacchus, Rex, Endymion and other krewes. There was a consensus that emerged, from comments on the street and in the paper, that this year’s was an old-fashioned Mardi Gras: smaller, less lascivious, and marked by fewer arrests than previous years.

Nevertheless, Katrina was a conscious foil in several of the floats that moved through the more well-heeled parts of town. Many New Orleanians created costumes and painted placards to poke fun at the hurricane and the political response to it. “No Place Like Dome!” read a sign on one float, while another warned that "I don't break for FEMA." Yet another announced “My Toliet was on TV.” Couples draped themselves in suits and dresses tailored from the blue tarps that are now ubiquitous on homes citywide. There were people costumed as mold, and as Dick Cheney in hunting regalia.

Living in New Orleans and teaching at Tulane for the last 28 years, Lawrence Powell had long ago caught New Orleans fever. But he wasn't enthusiastic about the 2006 Mardi Gras nor the city's prospects.

The new New Orleans, recreated with tourism in mind, would remain a "libidinal safety valve," a place where visitors come to shed inhibitions and lose themselves in excess. But in the future, these excesses would be controlled and meticulously marketed, like in Las Vegas or Orlando. Lost would be the city that incubated much of what's authentic in American popular culture. According to Powell, New Orleans as the place "where land meets water, and a Latin-Carribean ethos meets the Anglo-American one" will give way to an X-rated adult theme park.

Unlike cities known for homogenous neighborhoods and strictly enforced ethnic ghettos, the geography of New Orleans during the city's formative years in the 19th century forced Afro-Creoles, people from the Carribean, Italians, Irish, Germans and other immigrants together. In the city’s streets and neighborhoods these immigrants competed with and satirized each other, and played music together. There just wasn't room to avoid each other, especially prior to air conditioning when people just had to be outdoors. But this culture always rested, at least in part, Powell explained, on black oppression. This brand of social control is still very much in tact, and Powell sees southern Louisiana as the "most racist part of the country today."

"Some of the national guard that came into here were shocked at the raw racism here." The government agencies overseeing the rebuilding process seems utterly unable to build equity into the the rebuilding process. "Trying to coordinate all these diminished and uncertain expectations is excruciating," Powell told me.

"That people are trying to rebuild in some of these areas says a lot about the grit of people," he said, remarking on the grain of optimism he maintained about New Orleans. "Most would be beaten down by that, but these people are determined to come back."

MICAH MAIDENBERG is a freelance writer who lives in Sunset Park, Brooklyn.

An Open letter to Hong Kong

I feel like I’m riding a roller coaster every day and night, debating with myself endlessly where to go. Some things that have happened to you have been beyond acceptable. However, I still decide to stay, because it is you who is in my mind, not those vampires who have drunk up your blood.

I’m writing to you from the corner of the world which I imagine in your mind lies somewhere at the dusty crossroads of the Iron Curtain and Auschwitz, south of the Baltic Sea and oblivion.

This project developed from a conversation between Phong Bui and myself about art in the United States since what has long been referred to as the mid-20th century “Print Renaissance,” and my belief in the critica impact of printmaking on artists’ work in other media.