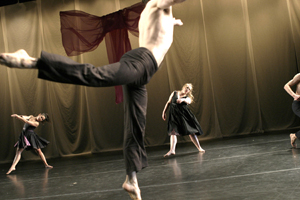 Last summer the dance world was set ablaze when Tere O’Connor sent an oil-soaked letter to The New Yorker. This inferno, although originally intended as a burning-at-the-stake for leading dance critic Joan Acocella, took on all dance criticism. In this widely distributed but unpublished letter to the editor O’Connor stated that Acocella’s review of his work, among other things, was “bloated,” “oracular,” and “intellectually porous.” He went further on to say that “These critics do not know how to read dances…they don’t do the work of finding out what is actually going on in the minds of the artists or what are the contexts in which these works are created. They have reduced dance criticism to an explanatory, superficial, retelling of events.”

Cooler heads prevailed. The fire has since gone out but smoky cinders are still scattered along the scorched landscape for all to see. It is out of these ashes and charred remains that I was asked to take a look at O’Connor’s first work since the ordeal.

Full disclosure: this is my first dance review, though I do write about performance and dance from a more scholarly perspective. But O’Connor’s lament about both Acocella’s review in particular and the larger nature of dance criticism in general has got me questioning just what purpose dance criticism and dance reviews serve. At a base level I suppose that it has something to do with allowing newspaper and/or magazine readers to feel as if they were the audience at the actual dance performance—a kind of recorded history. In other circles of the performing arts, reviews are used to secure a paying audience for the run of the event (assuming they are good reviews). For dance, on the other hand, reviews generally appear after a performance has closed and resurface in press packets. Seen in this way, reviews and criticism are reserved for the choreographer’s promotional materials and grant applications (again, assuming they are good reviews). But perhaps, in the end, such reviews, this one included, begin a conversation—one not meant for press packets and promotional materials, but for that intimate exchange between writer and reader, dancer and audience member, choreographer and critic. So here goes: 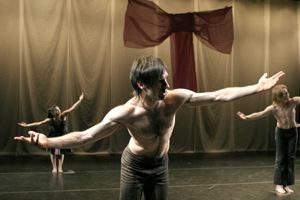 After his loquacious rant against Acocella, one might suggest that O’Connor take his foot out of his mouth and let his choreography start speaking for itself, which is exactly what happens in BABY (March, DTW). In fact, BABY is almost pure speech. Uttered phrases outweigh movement phrases, and what we are left with is Dialogue Choreography, where the choreography is inspired by and takes direction from the text. [Readers: do not be surprised if O’Connor writes another infamous letter, this time to Jennifer Homans, dance critic for The New Republic, who, in a recent critique of DTW’s season, bemoaned the fact that dance these days includes so little actual dance]. It’s no coincidence that when the dancers begin reciting language that plays with assonance of the letter “l” sound, the movement becomes langorous and lithe, or, when they begin to shush each other morphing into “sh” words such as “shoe,” “shoeshine,” “shit,” “Chicago,” arms crisscross as if they were rubbing two sticks together to start a fire.

Along with O’Connor’s signature melding of dance and text, BABY is also composed of what can only be called nonsensical vignettes. BABY opens when Matthew Rogers, donned in cowboy hat and boots and mini-skirt, leads an imaginary horse, named “Whatever,” out on stage. From here, horseplay, quite literally, ensues. Two dancers tear down the white curtain in the middle of which is a large, oversized pink bow. This is not the only obsession with material—Chris Williams stares at a pink fabric sculpture downstage, and, with hands on hips, lobs insults at it: “Fuck you,” he shouts, his torso arched forward in aggression.

These splintered moments don’t amount to anything in particular. Nor are they fleshed out enough to resonate as anything other than just a passing fancy. In this way, O’Connor’s dance is a product of its times: Momentary bliss. Distracted attention. Cruel comedy. Multiplicetous difference. Bottom-of-the-heart cynicism. It’s a perfect dance for those who were raised with MTV as a mother and Atari as a father. It’s dance for those who can use the ATM while simultaneously text messaging and searching their ipod playlists. It’s dance for those who are, right now, reading this review on the internet with three other windows open: Craigslist, Myspace, and Google.

O’Connor’s BABY exhibits the same qualities as a baby. Its identity is always being negotiated, always in flux. Just when we feel or think a moment is one thing it becomes another. The choices are forever open and every attempt to solidify meaning is a disruption leading to a new forked road—if it sounds a lot like life, it’s only because it is.

Tere O’Connor’s Rivulets begins in complete darkness. The music—an original score composed by O’Connor himself—permeates the space, filling the entire building for a moment. The lights rise, and the performers, relaxed over each other, gently awaken, stirred by the music.