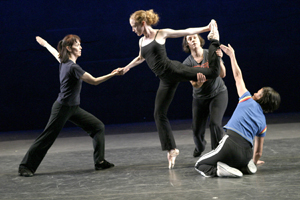 Though one might assume a dance program titled Sourcing Stravinsky would focus on the life, work or ideas of the renowned composer, it was by no means the stipulation of Annie-B Parson, the program’s curator.

“My only request was that they begin with Stravinsky as a source,” the choreographer explained in the program notes accompanying Dance Theater Workshop’s April program “Sourcing Stravinsky,” which featured choreographers Yvonne Rainer, David Neumann, Rennie Harris, Cynthia Hopkins, Danya Hanson and Linas Phillips.

Even with such an open-ended directive, it was hard for the choreographers to make themselves heard over the power of Stravinsky’s legacy. This begs the question: what is it about the composer that keeps him, save for one of the works, so prominently in each artist’s final product?

An obvious part of the answer is his music. Four of the five pieces use his compositions. Rainer, a co-founder of Judson Dance Theater in the 1960s, once said that for dance, music’s “only remaining meaningful role… is to be totally absent, or to mock itself.” Yet in Rainer’s second dance piece since 1975, she not only unironically works with music, but Stravinsky’s “Agon,” to which George Balanchine choreographed the famous ballet.

Rainer’s “AG Indexical, with a little help from H.M.” is a witty reworking of the collaboration. Four female dancers perform the piece, only one of whom is on pointe. They present different ballet pairings and groupings, employing Balanchine’s original choreography. A brilliant section of humorous and awkward manipulations of the pointe dancer’s limbs and torso by the three other women questions and pokes fun at gender roles in traditional ballet. Later, the piece restarts, accompanied by Henry Mancini’s score, “The Pink Panther.” This new beat complements the steps, and Rainer exposes an often unnoticed jazzy side of Stravinsky. The piece’s dual score perhaps doesn’t mock itself, but it does comment on the sacrosanct nature often automatically attributed to Stravinsky/Balanchine works.

Neumann’s “hit the deck. (studies and accidents)” shifts between the expected and the unexpected. Chairs fly out of view with silent landings and topple into view with a crash, while dancers make dramatic leaps and lifts followed by drooping, arched backward spines and seated stillness. Neumann and on-stage pianist Carol Helen Wong did a minor reassembly of some of the Stravinsky’s works for solo piano. When Wong broke out of the music’s structure, standing up to pound on random keys or slap piano strings, the movement gained in excitement. When she played the chords as written, it dwindled into the expected.

Harris’ “Heaven” presents a section of the famous “The Rite of Spring” in his self-described “hip-hop vernacular.” The rapid, precise unison of the four female dancers highlights Stravinsky’s complex rhythms. The piece honors the timeless nature of the composer’s score by re-staging a nearly century-old piece in a comparatively new dance form. Yet beyond this homage the piece fails to stimulate. It’s a re-staging with new moves, but unfortunately nothing more. 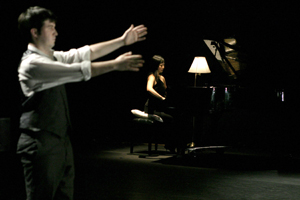 Hanson and Phillips’ faux-documentary, “Track 11,” is very conscious of Stravinsky’s infiltrating power. Noting his music, the piece tries to illustrate Stravinsky’s compassionate work with homeless people. The information is sketchy at best, as the performers present shallow, impromptu monologues that sound like half-baked high school research projects. A filmed interview full of leading questions brings a homeless man to a vague recollection of Stravinsky as the sharer of sandwiches and Doritos. Hanson and Phillips accumulate some movement material from the interviewees’ actions, turning pedestrian arm gestures and stance shifts into full body phrases and repeated movement scores. These elaborations soon become unwieldy, climaxing in a struggling, self-abusive tussle. The characters’ explorations into Stravinsky portray the magnitude of his influence as overpowering. Their well-intended research project collapses in a crumpled pile as Stravinsky shuffles along on the video screen above them.

Only Hopkins’ “Tsimtsum” succeeds in minimizing Stravinsky’s role. In a silver space suit, adorned with mini-bottles of whiskey dangling off her body, flowers on her head, a strap-on pig nose and helmet, and a distorted, echoing projection of her speech, Hanson coos of an unwritten opera about a post-apocalyptic world conceived by Dylan Thomas and Stravinsky. She presents her own version, singing original words and melodies as she slowly turns, walks, sways and drinks whiskey. Hopkins is the closest anyone comes to a “sourcing” of Stravinsky free from representation.

Perhaps it is the inescapable nature of such a festival to not only honor but feature the composer in its works. The challenge seems to be the recognition of his genius without slipping unconsciously into mimicry.

The word “life” is a fine title for any exhibition because, in the end, isn’t everything surrounding us simply life? But in the case of Gillian Wearing’s Life, which is the largest exhibition of the artist’s work by a U.S. institution, it proves to be a perfectly fitting title right from the beginning.

Sometime around 1914, the American composer Charles Ives outlined a daily schedule for life at his Redding, Connecticut home in a diary called “Our Book” that he shared with his wife, Harmony. By 6:30 am, Ives was “up & at them,” followed by chores and then a quarter-of-an-hour playing Bach.