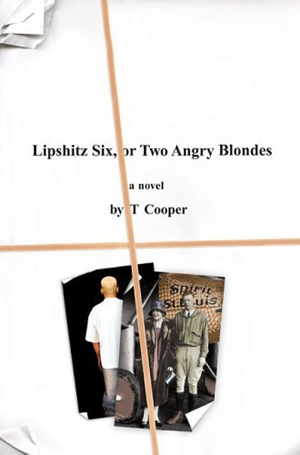 Meta-fiction shows up in different ways; it can run consistently through an entire book, informing every statement the author makes, or it might pop up in sparse, subtle moments. Someone like Rick Moody is typically slight with the meta-moments, dropping an “I” or a “me” in a few key places to inform the reader that it is the author’s story, after all, that is being told. T Cooper, with his second novel, The Lipshitz Six, or Two Angry Blondes, employs the device more heavily.

One might use the book’s alternate titles to name its consecutive sections: “The Lipshitz Six” are the narrator’s recent-ancestral family, who we catch up with as they disembark at Ellis Island, having just escaped the second wave of Russian pogroms. One of the children is soon lost, and here begins the story of Esther Lipshitz and her many kinds of loneliness—loneliness that leads to depression and eventual dementia, when she becomes convinced, years later, that her lost son has become the famous Charles Lindbergh. The “Two Angry Blondes” are Charles Lindbergh and the millennial hip-hop star Eminem. Esther’s great-grandchild narrates the second part, and is named T Cooper. T is introduced as a man, and impersonates Eminem (lucratively) at bar mitzvahs.

Cooper is no stranger to the gymnastics of gender-bending. Before publishing his first novel, Some of the Parts, he co-founded the drag-king group the Backdoor Boys. But Cooper draws a pretty straight line between autobiographical material and fictional exercises. The narrator’s rhyme-wielding, lady-hating second adolescence doesn’t seem to belong to the author—not even in a Mr. Hyde sense. So it’s not immediately clear why the author gave this particular character her name. (When we find out that T was actually once a woman, and is about to artificially conceive with a partner, who is for the most part referred to as “the wife,” it starts to make a little more sense.) The first half of the novel is clean and well executed, but T, in contrast, doesn’t sound like a published novelist, as he claims to be. We can see that T is squandering T’s potential; T doesn’t know what T wants anymore.

Most of the Lipshitz Six characters are lonely, and each in the same way: they long for what they cannot have. Esther is in love with her brother; her husband is in love with the brother’s dead wife; their son is homosexual but hides this from the family. There are other hints of incestual lust, though told with gentle innocence: Esther’s childhood reminiscence of petting with her female cousin, for example. But the dichotomy between knowing what one wants, however forbidden; and not knowing what one wants out of a sea of identity choices, could be representative of the difference between the modern and the post-modern consciousness.

The “Lipshitz Six” chapters are by far the strongest, and upon their close one is ready to put the book down. Esther’s story ends with such a lovely sustain (“Esther would die the provider of answers to her own questions: Where? Here. When? Now. And how? Just like that”), that the first-person intrusion in the following chapters is not met without resistance. The writing in the section we shall call “Two Angry Blondes” falters; metaphors occasionally seem forced or half-drawn, with the authorial pretext that the narrator is a lazy thinker. For example, T’s attempt to relate Charles Lindbergh’s flight to the planes that crashed into the World Trade Center ends with a sudden “whatever.” The three planes play an increasing role throughout the novel’s final quarter. T, though living in lower TriBeCa, is detached and full of irreverent humor: he is obsessed with the swastika painted on the Spirit of St. Louis’s nose, and unflinching in the face of the theory that Jews had something to do with 9/11—just as Esther’s infatuation with Lindberg continues even as the pilot starts to flaunt his anti-Semitism. Unfortunately, the writing falls short of the material’s unique potential; T is perhaps the only non-self-conscious Jewish-American and transgender character of recent memory.

But ultimately, Cooper’s exercise in meta-fiction, and in dredging real family history and heritage (the story is partially true, according to a Times article Cooper wrote soon after the book was published) in order to reconcile his own conflicted identity, is distinct enough to hold our attention. He acknowledges the clichés surrounding autobiographical fiction and creative memoir by referencing successful contemporary books: Jonathan Safran Foer’s Extremely Loud and Incredibly Close (“No one wants to read the thoughts of a 7-year-old”); and Dave Eggers’ Heartbreaking Work of Staggering Genius (T refuses to write about the two suddenly-dead parents whose obituary opens this part of the book). He avoids the insecurity an autobiographical writer faces when attempting a project like this by creating someone else, who does happen to be a writer, and is therefore able to take the heat in his place.

Thirteen Ways of Looking at Disappearance

The ways of disappearing are as myriad and complex as they are mysterious and unpredictable. To disappear does not mean to escape, and it is not the same thing as to be missing, absent, or invisible. To disappear does not mean to not be here; it means something more akin to finding a way to matter while not appearing to [or as] matter. To disappear is to raise recursive questions: if something is gone, is it in a better place? Will it reappear? Should we try to find it? Does it still exist? Was it ever here? These questions are as true of a magic trick designed to make the Statue of Liberty disappear as they are of a lost sailor, an altered sign, a former country, or a dry lake—to name but a few of the subjects touched on by the writers whose contributions follow.