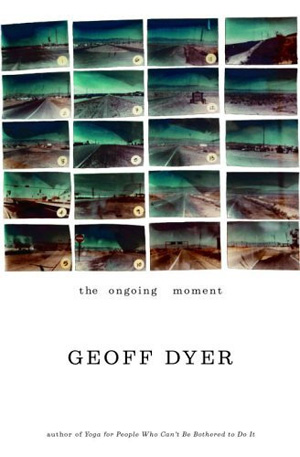 Reading The Ongoing Moment is like sitting down with Geoff Dyer to coffee at a corner diner just after accompanying him to a recent survey exhibit of 20th century American photography. The exhibit would have been filled with images of park benches, subway musicians, blind beggars, hands, open doors, hats and stairs. Dyer would have an encyclopedic memory for quotes from Walker Evans, Diane Arbus, Alfred Stieglitz, and for lines of verse from Walt Whitman, Philip Larkin, and John Ashbery.

In his new book Dyer is less interested in the “idea of photography” than he is in the people who took photographs, the things they took pictures of, and the dialogue created between photographers in the recurring images found in his favorite photographs.

Dyer, a veteran of genre-defying nonfiction books on subjects ranging from D.H. Lawrence to jazz, succeeds once again in creating a tightly woven, idiosyncratic narrative about a world in which he’s a fringe observer: he confesses to not even owning a camera, and that he is merely “an Englishman undertaking a survey of American photography.” But he valiantly approaches his subject with the hope that he has, in Diane Arbus’ words, “some slight corner on something about the quality of things.” To provide a fresh perspective, he consciously “avoid[s] quoting Berger, Sontag, Barthes, or Walter Benjamin every five pages.”

Photographers are catalogers of visual inventories. They fix an image, freeze it forever. This suspended moment, rather than stagnate, opens layer upon layer of mystery. Dyer quotes Garry Winogrand as saying, “There is nothing as mysterious as a fact clearly described,” and it is with this in mind that Dyer jumps from Edward Weston’s fascination for the functional beauty of the toilet to Weston’s lavish love life that included Tina Modotti, Charis Wilson, and many others.

Dyer’s strength is in his seamless maneuvering from one photographer to another. There are no chapters or even divisions in the book. He jumps from the use of hats in pictures—“the story of the Depression can be told quite simply through photographs of men’s hats”—straight into the use of stairs. On Eugène Atget’s staircases, he says that “they lead us deeper into the picture even as they indicate a way out and beyond it.” Whereas, in Brassaï’s steps, “the sense is always of stairs looking down.” He continues with the stairs of André Kertész and Roy DeCarava.

Admittedly, Dyer’s focus on documentary photographers causes him to overlook some key players. Noticeably missing are Cindy Sherman, Irving Penn, and other lions in the past century of photography. He admits that the people and pictures discussed are a whimsy of his choosing.

Men dominate the book, although he writes about Arbus and Dorothea Lange at length, and manages to fit in a bit of Nan Goldin even though she doesn’t really fit into the bigger picture. He writes briefly about her use of beds and then segues to what he deems “the most disgusting picture of a bed,” a photograph by Stephen Shore who, “photographed the unmade bed of a friend who had not changed the sheets for six months.”

There are some 200 images included in the book, all of them small and lacking in detail. But ultimately they are unnecessary. What proves most potent is Dyer’s transformation of seemingly simple photographs of mundane objects into a fascinating dialogue between photographers. After three refills of coffee at the corner diner discussing photography with Dyer, you’ll want to go straight to another exhibit and seek out the narrative he so deftly exposes for yourself.

The Expanded Moment of Being

The choral piece Miserere by the Italian composer Gregorio Allegri (1582, Rome–1652, Rome) is assumed to have been written in the 1630s and was regularly performed in the Sistine Chapel in Rome. It is a work for nine voices, divided between two choirs. The piece consists of six sections, which are basically repetitions, in each of which a different line of Psalm 51 is sung. Today, when I listen to this piece outside any religious context, I feel as if the piece could go on and on. Listening to it, there is no difference for me, for instance, between minute three and minute eight. I am in a state of supreme concentration during these 12 minutes or so, with no sense of now or later or before. The piece creates its own time, and in these repetitions, one loses the sense of time. It has the effect of a piercing Now.

Cross Pollination is the product of a partnership with the Crystal Bridges Museum in Bentonville, Arkansas, which has lent 16 prized images of hummingbirds by the quirky American salt marsh painter and naturalist Martin Johnson Heade for the occasion, along with other works.