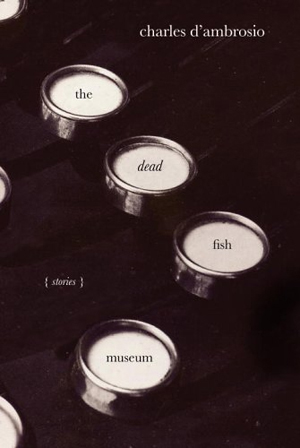 Charles D’Ambrosio’s new collection of stories, The Dead Fish Museum, is a remarkable set of mixed blessings. Here are eight stories, impeccably polished. Technically they are almost flawless. Every word shines, every phrase sparkles; the sentences stack up one on another and lock perfectly into place. Every part fits into every other part like gears in a machine. And there is a fascination in watching this clockwork run. You marvel at the skill evident in the making of it, the beauty of all the individual pieces. Yet at the same time there is occasionally a kind of spiritlessness present in these exquisitely crafted little machines. To say that they are heartless would be accurate and cutting in the manner of a double-edged sword; on the one hand (like the best fiction) they are cool and merciless in their treatment of their subjects, while on the other hand they seem to lack an organic, animating force.

Take, for example, the story “Blessing,” a look at the complexity of one family’s mechanics, centering on a strained visit during the flood season of a nearby river. D’Ambrosio’s prose here, as everywhere, seems effortless: “At times,” he writes, “the air is so damp and dense with fog you feel as if the waters had just yesterday receded; other times, the feeling is antediluvian and expectant, especially in late winter or early spring, when the rains fall and the Skagit floods.” (174) The descriptions are evocative. The characters are sharply drawn. All the same, the story unfolds in way that feels almost schooled. It’s as though everything here has been built point by point from an outline of an excellent story. The individual aspects of D’Ambrosio’s writing are laudable, but they fail to ever completely cohere.

“Screenwriter,” one of the more conceptually interesting stories in The Dead Fish Museum, suffers from a similar inability to ever truly shake free of its self-conscious structure and become an independent animal. There is a sense that effects within the story are produced rather than natural. Here, however, the world of the story is so peculiar and visceral (the effects so effective) that even within the confines of its stylized cage it is haunting. This claustrophobic little tale of a self-injuring ballerina and a manic-depressive screenwriter falling in love could easily slip into Hollywood-ized asylum cliche. Yet it stays unsettling. This is mainly due to D’Ambrosio’s gift for vividly capturing both small, ordinary details and less tangible ideas. In one scene: “Instantly a sort of pulmonary breeze blew a green curtain into the room, expanding the space.”(68) In another: “the ballerina seemed a mere puff of self, passing like a spirit out of their heavy Old World sadness, whatever it was about.”(59)

“The Bone Game,” which closes the book, stands out as the most complex and dynamic of the stories included. In it, an American tycoon’s grandson, searching for a place to scatter his recently deceased grandfather’s ashes, becomes involved in a surreal entanglement with a Makah Indian girl. He gambles away everything that he owns while playing the titular game and then descends into an uncertain realm somewhere between fantasy and dream. His descent becomes the point at which the story takes flight. The prose spins out, losing its careful feel and becoming bewilderingly, dazzlingly strange. It’s as though being released from linear narrative has freed D’Ambrosio to embrace the current of his own language. In this moment he shows himself to be capable of weaving emotion and momentum into a cathartic ladder that leads the story to a satisfying conclusion.

It’s hard not to recommend The Dead Fish Museum, not only as a work of elegant and enjoyable language, but as a work of skillful fiction. The word “skill” seems unavoidable in discussing D’Ambrosio’s work. There is no question that it’s applicable; he is a craftsman who has achieved a high level of refinement in his art. There are very few writers working today whose prose is as keenly honed. Yet at the same time there is the frustrating bloodlessness that many of these stories possess. One longs to see more of the kind of uninhibited, imaginative creation that “The Bone Game” hints at. However, even within the stylistic constraints evident here, he distinguishes himself as a capable and even virtuosic writer.

K.M. Ferebee is a writer based in Bronxville, NY.

“The question is simply this: Can a negro, whose ancestors were imported into this country, and sold as slaves, become a member of the political community formed and brought into existence by the Constitution of the United States, and as such become entitled to all the rights, and privileges, and immunities, guarantied by that instrument to the citizen?” This question lies at the heart of the majority opinion written by the US Chief Justice Taney in the Supreme Court’s 1857 ruling on the Dred Scott v. Sandford Case. And on the shores of Governor’s Island Charles Gaines asks this question again.

There’s an enchantment one feels with Dr. Charles Smith’s work. Whether it is the sheer expanse of his world building or the peculiar levity he has developed as an aesthetic, it can prove challenging to interpret his practice beyond the initial impact of its immersive charm.