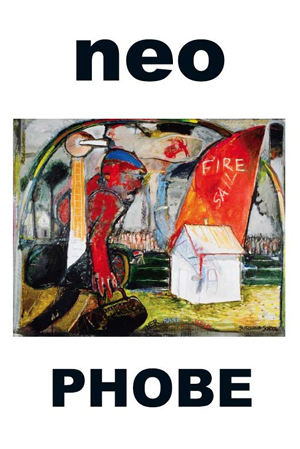 Jim Feast’s novel Neo Phobe, written with Ron Kolm, is a shaggy monster of a book, redolent of meta-narrative and deconstructionism and word and mind games reminiscient of the the ‘70s heyday of Donald Barthelme and Tom Robbins. The novel is ostensibly a crime mystery, but it is leavened with so much postmodern gamesmanship and scabrous jokery that the plot quickly and transparently becomes a springboard for metaphysical and sociological conceits, with decidedly uneven results.

Feast’s novel resists summary, but for what it is worth, the book tells the story of the Neo Phobes, a group of beer-drinking part-time poets and philosophes who unwittingly stumble upon clues regarding a string of rape/kidnappings. The multiple protagonists enthusiastically decide to solve the crime, partly with an eye to turning their account of the case into a bestseller. All manner of skulduggery ensues, revolving primarily around a running confrontation with Operation Savior, an anti-abortion church group attempting to use computer projection to re-program the minds of the heathen. In cracking the case, the Neo Phobes become entangled in an undercover sting operation to a mental hospital, an anti-abortion rally gone astray, a Mafia kidnapping, extensive computer hacking, a motorcycle chase, several shootings and stabbings, an attempted rape, and lots and lots of sex, drinking, and barroom pontificating.

If all this sounds chaotic, it is, although Neo Phobe has it merits. Feast and Kolm are obviously bright and literate, and underneath the freewheeling literary roadshow is a thread of serious contemplation of engaging issues: the role of evangelism and faith in society; gender roles in the workplace and elsewhere; the decline of capitalism and its implications for the individual. Feast’s thinking, as best it can be adduced, defies categorization: the anti-abortion cleric Tamilwire, for example, is a nuanced character capable of remorse and self-reflection rather than the cut-out caricature one might expect. The book is often quite funny, as well, with a palpable delight in weirdness and slapstick that runs in refreshing counterpoint to the somber tone of so much recent literature. The book rides a manic energy that conveys a sense of joie de vivre and play, rare in an age oversaturated with dread.

Unfortunately, however, the overall effect of the novel is hampered by a variety of serious deficiencies. The prose is at times shockingly clumsy; Feast has a near-endless supply of similes (a pistol lying on the street is “like a petal blown off a flowering apple tree,” a glum mood is “hardening like quick-drying cement,” a line of protesters appear “as solid as St. Patrick’s Cathedral,” an attractive woman is “like a fresh corsage thrown into a park of wilted flowers,” etc.), and when metaphors are released with such indiscriminate abandon it is inevitable that not many of them will reach a level of Donnean precision. The manic sprawl of the plot has as its price a diffusion of narrative clarity; this reader found it difficult to keep track of the various characters and subplots, not a sophisticated objection, perhaps, but an unanswerable one. The Neo Phobes are based, not very loosely, one suspects, on the underground poetic collective the Unbearables, of which Feast and Kolm are members; yet for a quasi-roman a clef the characters are disappointingly insubstantial.

A friend of mine pointed out that Feast, like most of the Unbearables, has the kind of creative mind— associative, improvisatory, non-abstract—that is perhaps best suited to the more concise media of poetry and free-form polemic. Neo Phobes confirms that; when one of the characters says that the group’s writing “is unfixed—almost transitory… everything happens quickly, like a jazz solo. Just blowin’ in the wind,” one cannot help but feel that this is true of the novel the character inhabits as well. Aficionados of ‘70s-style postmodern fiction and fans of the subculture of the New York literary scene will find this book endearing at the very least. The rest of us will find it exasperating.

Michael Lindgren is a bookseller and musician whose writing has appeared in the L Magazine, Rain Taxi, Public Illumination Magazine, and American Book Jam. He lives in Manhattan.