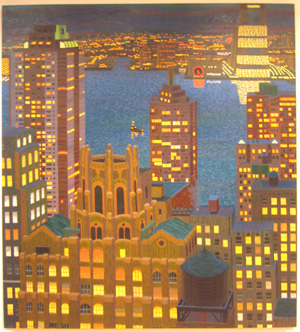 Seeing in the dark is not a simple matter. Because of the physiology of the cones and rods connecting to the optic nerve at the back of the eyeball, in the darkness we have a literal blind spot in the center of our field of vision. Hence to avoid this, to actually see in the dark, we have to glance slightly to the side. The recent nocturnal paintings by Yvonne Jacquette (at DC Moore through April 22nd) also seem to contain a blind spot—a gap between the expected representation and the actual representation—and to see past this breach requires the viewer not only to see slightly off kilter but to think a little less straight as well.

Jacquette is a journeyman painter who, along with a dedicated cadre of artists like Philip Pearlstein, Alex Katz and Chuck Close, has established a type of realist rebuttal to the trends of abstraction that have dominated the cutting edge of discourse in New York painting since the early ‘40s. Like the above-mentioned artists, Jacquette has also maintained a narrow focus since the early 70s on her signature image, the aerial landscape, and it is perhaps through her mastery of this constant image that the oddness of these paintings can begin to be understood.

We see what we want to see, and Jacquette uses this predisposition like a judo wrestler turning an opponent’s momentum to her own advantage for a decisive throw. At first glance her pictures appear to possess an almost photographic fidelity, especially in the small pastels. We see views we can recognize or conceptually identify. Streetlights, headlights and illuminated rooms glimpsed through windows—depicted as pointillist dots or blocks of light yellow, orange and red—converge into compositional vectors in the form of roads, building facades or parking lots. It’s only after we get past this skillfully crafted artifice that we begin to look askance and see the nuts and bolts of these paintings, all the futzy, funny and funky stuff hidden on the other side of our blind spot. Suddenly Jacquette’s wit and humanity begins to seep in, and everything that looked so serious and rational takes on a cast of humor and a naïve yet sincere pathos.

“Third Avenue (With Reflections) II,” (2004) is a scene rife with pictorial gambits. Look closely at the ochre and orange avenue receding from the lower right corner to the upper center edge and you’ll notice that it’s cut two thirds of the way up by the side of a mirrored high-rise, its reflection cubistically extending its thrust, albeit warped and in reverse. The cars rushing downtown in the rain are as stubby and chunky as handmade toys, and the blocky perspective of the apartment buildings, bathed in receding shades of earthy red-orange, recalls the faux naïve imagery of the great Chicago painter Roger Brown.

Though actual figures are rare in these pictures—I spotted only two black strollers on the lower left side of “Dark Basilica,” (2004)—the presence of people is hinted at through lit windows, a lone tugboat or the zipping cars. The Times Building, crowned with its ball and clock tower, is the main subject of “Above Time Square,” (2003). Behind it, the green iron skeleton of what will become a massive skyscraper stands strangely out of proportion. Still farther back, from a single window in a mostly dark nondescript building, the cold video glow of a massive TV is the only sign of life. The skin of roofs, roads and sidewalks are woven from a network of fluttering brush strokes that seem to give the impression that these images are themselves reflections on the surface of a rippling pond.

Is Jacquette’s use of these “overviews” related to a desire to share a sense of omnipotence, to depict the trappings of 21st century society with the kind of “God’s-eye view” found in Bruegel’s “Return of the Hunters” or “Tower of Babel”? Or is she simply inviting us to join her as she floats above the grubby struggle of life on the street? What could be more explicitly modern than to be awakened from a nap with the sound of a stewardess saying “We are beginning our descent—please bring your seats to their upright position and close your tray tables”? With a drowsy peek we look through our window as illuminated neighborhoods slip past below. Jacquette’s intentions, like the paintings themselves, might be viewed most clearly when not looked at directly.

Darkness Manifest, Onstage and Off

The Joyce Theater remounted Molissa Fenley’s landmark solo, State of Darkness to Stravinsky’s The Rite of Spring. Fenley and Joyce Executive Director, Linda Shelton, spoke with Susan Yung about the origins of the piece and staging the demanding choreography in the pandemic.

The Case for Impure Vision

It is well known that in the wake of the Romantic era, Cézanne and a host of other artists dreamed of restoring a sense of innocence and purity to our senses—the naiveté of the artist and the innocence of the viewer. Is there such a thing as pure vision? When we are confronted with a painting, is it possible for us to see the object in pure visual terms without being influenced by a host of factors such as one’s prior history of seeing art or one’s acquaintance with art history?