Order is at one and the same time that which is given in things as their inner law, the hidden network that determines the way they confront one another, and also that which has no existence except in the grid created by a glance, an examination, a language; and it is only in the blank spaces of this grid that order manifests itself in depth as though it were already there, waiting in silence for the moment of its expression.” 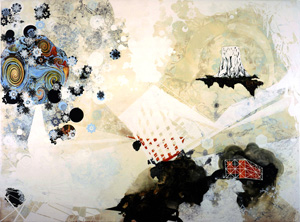 The more information our culture provides us with, the harder it becomes to navigate and construct our world. Our current reality is one of multi-channeled voices that present us with simultaneous instantiations of truth. It is an overloaded and hyper-saturated environment in which our desire to dominate and control nature as well as each other has blurred our understanding of what and where we are. The passive position of the individual within nature, as encountered in Casper David Friedrich’s paintings, has become a nostalgic memory. We find ourselves pressed into a realm of simultaneity that requires us to absorb more than we can comprehend.

This is the kind of reaction I had when encountering Tomas Vu’s painting in his current exhibition titled “Black Ice” at the Von Lintel Gallery. My first impression was one of dazzling, fantastical landscapes. While some areas are covered in depictions of fauna, others reveal intimate fragments and swirling, bubble-like worlds painted in an illusionistic fashion. Similarly large swaths are intensely layered with endlessly dense network of lines that have been silk-screened onto the surface, so complex that they form their own idiosyncratic geometry. It is pertinent to mention that Vu’s use of mechanical reproduction no longer yields to issues of media and identity as in the case of Warhol, but instead evokes associations of algorithmic reiterative logic found in digital technology. Only at the edges of these masses do some images become recognizable as architectural drawings of urban growth, abstract diagrams, and map-like graphs, all of which they struggle to emerge from the heavy- handed plaster ground. As a result, what has been edited and retained gives ways for the different panoramas to co-exist on the same pictorial field without falling to either the deep or shallow treatment of spatial conceits.

On the one hand Vu is searching in his paintings for a distilled tranquility or what was called “Cosmic Unity” through his love for nineteenth century landscape painting. On the other hand, he creates a world that reflects contemporary realities where the collision of disparate information that exists between a world of technology and an architectural hybrid, all interlaced with both the physical and mental construct. While the former longs for a retreat to nature, the latter is heightened by the artist’s compulsive ingestion of daily reports culled from sources such as the New York Times. These images build up an overload of visual information to such a degree that they begin to cancel out previous ones through over-painting. This visual conflict is what prevents his images from falling into the abyss of pure utopianism. Hence we are left with what Foucault speaks of as an “incongruous space,” a place where traditional knowledge, as established through the process of identification, is replaced by a state of simultaneity and non-definition. In this struggle, the margins between the natural and the synthetic are blurred at the hand of technology and its products. The work raises the question of how to live in a world in which nineteenth century positivism has been replaced by a William Gibson-like onslaught of technology and bioengineering coupled with the mounting number of natural and unnatural disasters. Destruction and construction run hand in hand with the dichotomy of synthetic and natural.This attempt to unify the natural and the man-made, along with the piling up of images and their constant reconstruction recalls the task of Sisyphus and the futility of eternal labor at an unattainable task.

In viewing Vu’s work, I also am reminded of the 19th century mathematician Riemann, who developed theories that described nonlinear, manifolds -the mathematical system upon which the theory of relativity was eventually founded. Instead of being mathematical in nature, Vu’s paintings use visual representation in order to create maps of psycho-geographies. The paintings are also reminiscent of the Belgian situationist architect Constant Neuhaus and his Babylon project, except that Vu is more interested in creating a diagram not just of a city, but of an entire psychological universe. This in turn relates his work to the English architectural group Archigram that experimented with the use of organic processes to design unbuildable structures in which technology and nature were fused.

On a formal level one could relate Vu’s work to that of Nicola López, Sarah Sze and, surprisingly, Kiki Smith. López’s work is more graphic in its concerns, both formally and conceptually. Her use of helicopters, collapsing buildings, and nonlinear growths of urban environments refer, as Vu’s work does, to processes of destruction and 9-11, but her narrative is more linear in its representation. Sze’s deconstruction and repositioning of familiar objects in order to create architectural landscapes formally relates to Vu’s compositional tactics, but does not carry the psychological uneasiness present in his work. This is where Vu’s work relates to Kiki Smith’s. Smith is more romantic than the aforementioned artists. She reveals the way things are made, their familiarity, and she does it with a strong awareness of the psychological. Her work demonstrates internal dimensions as they are related to external iconography. Vu manages something similar in his recycling of images from the outside world in an alchemical process of transformation that infuses the imagery with psychological weight. It is here that all the contradictions, what lies between natural and man-made, knowledge and information, hope and anxieties, is brought forth to barely exist in one space, and yet capable of exploding beyond it with incredible, compressed energy.

In a culture that is built to support white male voices, the attempt to carve a space as a writer-outsider is incredibly difficult, a task, Salesses argues, made that much more difficult by the traditional workshop structure where the author is “workshopped” while sitting, completely silent, in a room full of other students discussing her work.

The following narrative is made of conversation fragments stitched together—an attempt to capture a day. This is how conversations often happen: hours pass, we talk about everything and nothing, our voices move in and out of focus. It was a Thursday, like many others. I start my day teaching a six-hour class. Rirkrit Tiravanija and Tomas Vu, collaborators and co-conspirators, began this conversation over a game of golf. Me and my voice recorder entered the scene long after the game ended. It took a few train rides and an uber to find the two deep in Long Island.