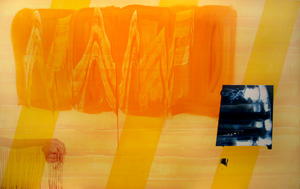 Ellis’s current show at Von Lintel Gallery picks up where his last show of word-based “Jeremiad” paintings left off. In this new series the words themselves were left off. Despite the disappearance of text, and its air of desperation, these new paintings share much in common with their immediate predecessors. The rant itself has become less overt, but the seething materiality, which is fire-eating at bottom, essentially remains the same.

The seven paintings included here are defined by an unruffled looseness that generally signals true artistic, as opposed to stylistic, maturity. The geometry is more convulsive and irregular. The grids are more ramshackle, and the gestures have become more intractable. These are all welcome developments in Ellis’s typically irreverent approach.

That said, there are problems raised by the paintings in this particular show, and they sometimes leave the viewer uncertain of the artist’s position. Some might be indicative of an artist reevaluating a project at mid-point. Many paradoxically contribute to both the best and worst aspects of the painter’s work.

More distressing, however, is that the paintings’ surfaces seemingly betray an alarming attitude of indifference. This isn’t necessarily a negative attribute, but the looser handling of paint suggests a reordering of priorities, some shift in painterly values. The question now raised is whether in fact Ellis’ new paintings are gloriously dissolute or woefully dissipated? I’m not certain that can be judged from surface alone. Within the practice of painting, even an apparently simple choice, such as selecting a medium, can often inadvertently reveal something as subtle to perceive as disinterest.

Ellis seems to be relying on the use of thinner, transparent glazes more frequently. Much of his 90s work struck me as being nearly impermeable. Those surfaces seemed to have more body, more implied mass. They read more thickly and the color seems to carry more weight somehow. The new painting actually harkens back to Ellis’ early work from the late 80s, which is defined by watery dispersions of ink that often dissolved rigidly constructed prismatic forms. In one sense, he’s come full circle as a color glazier. Some of these new paintings, particularly those in the back gallery, are nearly as dissolute as the 80s work in their fluid surfaces and bleeding runs of color. I’m skeptical, however, that it’s still a decision based on necessity in the current work. There’s a disturbing tension at play here that tugs between boldness and expediency.

In terms of outright success, color is the key this time around. An all-enveloping sunny glow permeates the entire gallery, and its twin spaces radiate in yellow-to-orange light and heat. This color energy is palpable in the paintings themselves and quickly penetrates the viewer. Ellis’s totalizing use of color here, more than any other single element, suggests a regathering of force and a reinvigoration of form.

Two large paintings located near the entrance to the gallery stand out in particular. The first, “Untitled (SEVL-05-8)” from 2005, marks a distinct turn in the artist’s work away from the more tightly structured grids and contained geometry that have remained Ellis’s perennially favored tropes. In this painting the geometric forms seem to visibly skirt away. They are not locked down, or well behaved in any Euclidean sense. Their implied velocity, catty wumpus construction, and imperfect execution are clearly courting disorder rather than any kind of intrinsic idealism. This slipperiness in approach to form reads as an immediate contemporary concern. “Untitled (SEVL-05-8)” strikes me as a rare and major transitional piece. Here one can feel Ellis tossing his personal playbook aside, and reconsidering the game anew, one unlikely move at a time. A new drama unfolds here through the intense recombination of manhandled geometry.

Another noteworthy painting, “Untitled (SEVL-06-4)” from 2006, is similar, but here the internal elements are more infernal. It’s an overheated, supercharged tour-de-force. The familiar vocabulary of stripes, grids, and geometric blocks takes a backseat to some seething color fission. In terms of color temperature, this painting is thunderously approaching china syndrome levels of heat and volatility. Structures aside, in terms of absolute molten materiality, this painting reminded me of Jackson Pollock’s last great “Blue Poles.”

Another thing that Ellis has proven particularly adept at, and this has been noted elsewhere, is that he always successfully individuates each painting. Paintings such as “Untitled (SEVL-05-5)” and “Untitled SEVL-05-7,” like true siblings, are characterized by their extreme personality differences. I once heard the artist speak highly of Barnett Newman, who, using a remarkably restricted language, managed to proffer some new philosophical proposition almost every time he painted. I suspect that Ellis too wants something more from his painting than just a pretty picture. Unlike most painters, he resists settling for just that. The kind of beauty that he typically employs is by nature uneasy, and is typically both brutal and elegant simultaneously. In his insatiability, he reminds me of the independent filmmaker John Cassavetes, who himself was another kind of irascible (remember that old Fugazi song?). Years ago, while filming Faces, Cassavetes declared:

We have to move beyond the current obsession with technique and camera angles. It’s a waste of time, How you shoot a film is a diversion. I think anybody can shoot a film. Look at the most commercial things in the world—television commercials. They’re magnificently photographed. What are we wasting our time doing that for? It has nothing to do with life. Now we’re making that a value. Pretty photography is part of our culture.

What both painter and filmmaker are after is another kind of aesthetic experience, something more meaningful, beyond the gloss that has an immediate and ruthless human value. This attitude could explain the artist’s reckless handling of paint. How important is it anyway to sweat over the polite surface of a painting? This goes well beyond nagging questions about the morality of beauty in painting. Our President doesn’t read newspapers, but most artists do. Maybe an internalized sense of violence is now necessary for any work of art to be relevant? Incidentally, Cassavetes once praised the painting of Delacroix for  “his emotional violence.”

Unfortunately, most abstract painters—almost by rule—are defined by their own lack of temerity. Geometric painters seem to suffer from this malady the worst. Ellis intuitively understands this and is consciously confrontational. He has done so in great contrast to his peers, and is known for willingly and repeatedly throwing himself into an aesthetic breech and so has opened up more new and exciting territory within the realm of abstraction than any other painter of his generation. It’s the ambition of his work that has put him there. I’m not convinced that this brinkmanship always makes for exciting results, but to his credit, Ellis’ painting has never been considered academic, or more precisely, Alexandrian. Ellis understands the role of risk in painting because he understands what’s really at stake with painting.