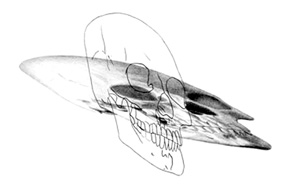 Anyone who encountered Robert Lazzarini’s “payphone” at the 2002 Whitney Biennial will remember it as an unassuming, blank-faced oddity that somehow managed to upstage everything else in the room. A meticulously detailed fabrication of a phone booth compressed into a perfect diagonal and standing at a gravity-defying slant, it looked as if it had been rescued from the street after enduring an inexplicable, cartoonish catastrophe. Yet, for all its quirkiness and deadpan humor, “payphone” also came across as emotionally unsettling and physically disorienting. In the climate of the time, barely six months after the 9/11 attacks, it felt emblematic of the abrupt, tragic and irremediable distortions that had redefined everyday life.

Not that anything’s improved since then. Disquiet and unease flit across the ivory-smooth surfaces of Robert Lazzarini, Drawings (on view at Deitch Projects’ Grand Street space through April 29th) like roaches on a pristine penthouse countertop. The most frequently occurring motif is a skull—an image Lazzarini has notably skewed in three dimensions—rendered for the most part in stark, uninflected outlines. Knives and guns also put in appearances, but the real subject of the show, as it is in Lazzarini’s sculpture, is the subversion of visual perception as governed by conventional systems of perspective. Images are warped, stretched and squeezed, often repeated on the same sheet as if spit out by a sputtering, off-register printer. Some are drawn with photorealist, if oblique, exactitude, while others are exploded into funhouse mirror shards and loose, dangling threads that abandon their original form to flirt with total abstraction.

Lazzarini’s bravura showpiece, an untitled wall drawing, climbs from the floor to the ceiling of the gallery’s double-height main room, its fluid black lines undulating like river currents in a Hokusai woodblock print. Several rows of teeth bobbing amid the swells reveal that the image is actually composed of a multiplicity of skulls, transmuted into sine waves and overlapping each other in a cascading, squiggly, Op Art frenzy.

Much has been made of the phenomenological aspect of Lazzarini’s work—the radical degree to which it changes in relation to the viewer’s vantage point— and in this show, the concept has been expanded to encompass both real and illusionistic space. The wall drawing, with its overwhelming size and optical patterning, appears to shift and expand in one way if you approach it head-on, and in quite another if you move at it from an angle. The ten other drawings in the room, all in graphite on large, toned panels, retain a traditional rectilinear shape but float on well-hidden substructures; some remain parallel to the walls while others tilt up, down, right or left, animating the installation with a herky-jerky, comic anxiety.

You can’t help wondering why some drawings are canted and others aren’t, or why one angle was chosen over another. It seems easier to accept an intrusion into real space by a drawing tilted up from the bottom like a drafting board, or down from the top, which imparts it a kind of architectural grandeur. But angling it from the side throws off our internal sense of symmetry and violates a cultural assumption that defines the picture plane as an organic extension of our field of vision. Devoid of the internal logic of a piece like “payphone,” this slight but inscrutable deviation from standard display practices feels capricious and arbitrary, even rude—a hairline crack across our veneer of rationality.

Lazzarini’s choice of subject matter presents us with further ambiguity. His iconography, according to the Deitch Projects press release, consists of “skulls, guns, knives and funerary statuary [which] exemplify a fundamental theme for the artist: the contemplation and fear of death.” To contemporary eyes, however, the skull as memento mori is all but emptied of meaning. The depictions of knives and guns feel equally harmless, resembling vegetable parers and cap pistols. The conundrum facing an intellectually cool artist like Lazzarini is that if he were to employ more timely and potent symbols of the precariousness and fragility of life—trading the skull for a child undergoing chemotherapy, to choose one example, or the knives for box cutters or the pistols for assault rifles—the imagery would draw so much attention to itself that it would overheat the artwork’s implacable surface, disrupt its conceptual balance and leave it vulnerable to charges of exploitation.

The success of “payphone” was due in part to its metaphoric blankness, which the viewer could fill with personal associations wrought from its unexplained distortions. The desire to use aggressive imagery in these violent times is understandable, but rendering it toothless for formal reasons, if that’s Lazzarini’s intent, doesn’t rid it of its connotations. Its pictorial qualities will encumber a purely visual reading his work, while its deliberate banality will prove a shallow vessel for the desired “contemplation and fear of death.”

It is here, however, that the double meaning of perspective—as both perceptual and mental outlook—comes into play. In one of the twenty-five conventionally framed works on paper that grace the gallery’s entranceway and front room, a photographically realistic but anamorphically compressed portrait of a young woman is overlaid with an outline of a skull, which brought to mind the opening lines of T.S. Eliot’s “Whispers of Immortality”: “Webster was much possessed by death / And saw the skull beneath the skin; / And breastless creatures under ground / Leaned backward with a lipless grin.” (“Webster” is the Jacobean playwright John Webster, whose theatrically spectacular though shockingly grisly revenge dramas made him something of the Quentin Tarantino of his day.)

To be “much possessed” by anything implies we have lost perspective, and to regain it we must step back from our obsessions, the farther the better. By using a symbol like a skull, which is so tightly bound to a specific set of cultural associations (i.e., a cliché), is Lazzarini consciously or unconsciously implying a shallow perspective, that his “contemplation and fear of death” approaches a suffocating emotional fixation? Are his experiments with perceptual perspective, which rip the clichéd image apart, an attempt to establish physical and emotional distance?

Or should his iconography be taken as a critique of a disconnected society, communicating via superficial signs and slogans, that assiduously avoids the subject of death until it’s too late? Similarly, are the toy guns and kitchen knives indicative of the violence perpetuated on a daily basis in our name without impinging on our conscience or even consciousness?

Since Warhol, questioning an artist’s intentions or the metaphysical implications of a manipulated image is a sure path down the conceptual rabbit hole. All we can go on, in the end, is our own skewed visual response. If a realistically modeled drawing of a skull strikes me as blunt and claustrophobic but I’m riveted by an abstracted version of same, I would argue that my reaction’s due entirely to the superior rigor and authority with which the latter holds the picture plane. Another viewer who might be more comfortable with the literal aspects of the imagery would deem my opinion a jaded generational prejudice. But with these drawings, Lazzarini seems to be working within some kind of hyperkinetic nether world, scrambling and unscrambling images outside of conventional interpretive contexts, where the distinctions of yes/no, either/or have ceased to apply.