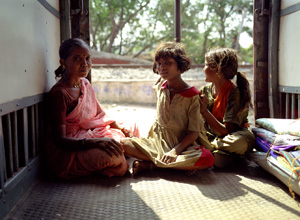 I recently had the chance to see the David Smith retrospective at the Guggenheim and left feeling slightly dissatisfied. After my exit I spent a few hours trying to wrap my mind around the reasons why. I’ve always liked David Smith, and I've seen a good portion of the exhibition in other venues. I wondered what I was expecting, if this show wasn’t it. It seems my expectations for a quieter and more searching side of David Smith alone had created a standard that that the museum couldn’t recreate.

The same week, on a lark, I stopped in to see a show at Tillie’s, a popular gathering spot and art space in Fort Greene, Brooklyn, and was immediately reacquainted with the benefit of seeing art with a clean slate.

In the rear of the busy space, a series of ten documentary photographs by recent Pratt Institute graduate Orrie King hangs in quiet contrast to the energy of the café. Her small, colorful photographs depict scenes of daily life in India, carefully blurring the line between journalistic detachment and voyeuristic portraiture.

“Girls on Train” captures the gaze of a mother and two daughters riding in the boxcar of a train. Interestingly, the photograph is taken from inside the train, looking out beyond the sitters, past an open door, and into the landscape. Two of the figures’ eyes are fixed on the camera and a third looks away. The portrait comes across neither as sentimental or objective, but raises these possibilities before settling something in between.

Similarly, “On the Bus, Lanavla,” smacks for a moment of something out of National Geographic until the disarming stare of the young girl on the bus is met and the preoccupied greeters in the foreground are recognized.

From image to image, King keeps us guessing about the personal distance between the subject and the lens of her camera. At their most successful, the exoticized, anthropological tone that initially characterizes her photographs dissipates before a humanized individuality takes over.

Although the two bodies of work are meant to comprise parts of a single show, their physical separation within the space forces separate viewing experiences.

Laurie Sermos’s photo-based diptychs and triptychs separate themselves from King’s pieces conceptually as well as physically. In contrast to King’s humanized snap shots, Sermos depersonalizes her subjects by teasing a formal comparison out of what might otherwise be stock imagery.

The pairing of her photographs invests them with an energy that is absent in the individual shots. “Untitled, Diptych" couples a vase of flowers with a view of the steel and glass ceiling from inside an airport. One-part sentimentality and one-part architectural documentation, the two mingle nervously and force a reconsideration of the subjects themselves. Another diptych poses an awkwardly cropped interior and a dense rain forest with similarly interesting results.

While it is difficult to actually see the two sets of photographs in this space as partners in a conversation, they pose an interesting comparison by contrast. King’s work can’t help but add personality and emotion to what at first reads as documentary, and Sermos does just the opposite by divesting her imagery of sentiment through calculated juxtaposition.

It’s unlikely that either of these artists will spend the rest of their careers relying on serendipitous encounters to present their work to the outside world. It is hard to say how much a more clinical and structured exhibition would affect the nature of their relationship to each other, but it would be significant. The warmth and informality of Tillie’s space serves both artists’ work well, and it goes to show that even if an environment can’t manufacture sound visual thinking, it can prepare viewers to appreciate it.

Chance and the Punctum

When Richard asked me to read his essay “Reality by Chance,” and to write for this issue of the Rail, I focused on his paragraphs about the thinking of Roland Barthes. I was especially interested in Richard’s observation that both Richard himself and Barthes welcomed assignments that would shift the subjects of their thinking.