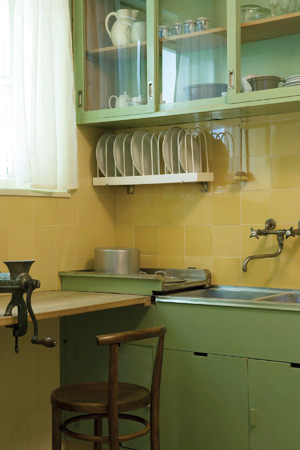 Accustomed to discussing the masterpieces of Modernism, it is easy to forget that Modernism in fact constituted an explosion of visionary movements that changed history forever. The Victoria & Albert Museum’s Modernism: Designing a New World 1914-1939, curated by Christopher Wilk, who did stints at MoMA and the Brooklyn Museum before heading to Britain, tackles the capital “M” movement and the mass culture that it birthed.

From athleticism to the worship of the machine, environmentalism to the cult of America, the show doesn’t dwell on the movement’s iconic objects but frames its mass appeal in a comprehensive and clear manner that offers surprises for even the most die-hard Modernist.

From Le Corbusier’s architecture to Jan Tschichold’s typography, the show tries hard to include everything. It’s quite refreshing to see the strong presence of projected works and an interest in performance—both important conduits of Modernism.

There are also case studies, including the British architectural modernism that rebuilt huge swathes of a devastated post-Second World War London, and the eagerness of Czechoslovakia to incorporate the movement into its new national culture.

Today, capital “M” modernism in America is plagued by its association with the kind of austere formalism championed by the dogmatic—if misunderstood—Clement Greenberg. It is an injustice to the concept, since the earliest European and American manifestations of the movement (evident in the show) were pluralistic currents celebrating multiple perspectives.

The “Frankfurt Kitchen” is a perfect example of how Modernism sought to change the way we lived, believing it was improving lives one design at a time. Exhibited in the UK for the first time in this show, the first mass-produced modern kitchen is accompanied by an eight-minute 1928 film that had been used to promote this successful experiment in user-friendly design.

Its clean, bright green surfaces, built-in features and compact design make it an elegant fusion of vision and practicality. Designed by Margarete Schütte-Lihotzky during the 1920s for a massive Frankfurt housing project, it was a pioneering prototype for all the fitted kitchens that have followed. Schütte-Lihotzky analyzed the way women went about the daily chores of food preparation and created a highly efficient space that reflected practical solutions within an elegant formal scheme.

Another welcome thrill is the solid collection of architectural drawings lent to the show by the Schusev State Museum of Architecture (MUAR), which underscores the leading role of Russia in early Modernism. Georgii Krutikov’s “Flying City Apartment Complex” drawings (1928) are superb abstract visions that come across without any cynicism or irony—something contemporary utopian visions have a hard time avoiding.

If the show suffers slightly from its expansive breadth, the wide sweep allows the curators to highlight the visual parallels among architecture, design and the human body. Oskar Schlemmer’s “The Triadic Ballet,” Trude Petri’s 1931 “New Berlin” tea service and Varvara Stepenova’s drawing “Charlie Chaplin Turning Somersaults” (1922) all constitute parts of a larger whole that only an inclusive retrospective like this could successfully evoke.

The V&A’s show, which will travel in the fall to Germany’s MARTa Herford and then next year to the Corcoran Gallery in Washington, D.C., is a welcome examination of the phenomenon that fueled much of twentieth century culture. The allure of Modernism remains and its lessons continue to teach us that the marriage of design, social consciousness, culture and practicality are not only desirable but also feasible.

Camille Pissarro: The Studio of Modernism

The recently opened exhibition at the Kunstmuseum Basel, Camille Pissarro: The Studio of Modernism, is a Pissarro retrospective which, instead of uncertainty, would likely bring a lot of pride to the artist. Curated by the museum’s director, Josef Helfenstein, and Christophe Duvivier, this exhaustive show gathers nearly 200 works by the artist, including 100 paintings.