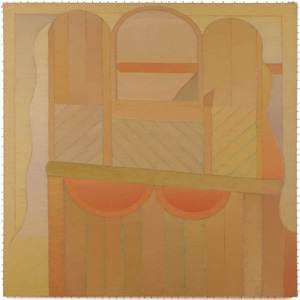 While the paintings of Miyoko Ito (1918–1983) have been included in most survey exhibitions and books about Chicago art from 1945 to 1995, she still remains under known in Chicago, and all but invisible in New York. The last time she had a solo show here was 1978. The reasons for Ito’s lack of recognition are complex, but they would include the fact that she first hit her stride in the 1950s without incorporating images derived from mass culture. The subsequent emergence of Pop and Minimalism had almost no effect on Ito’s work of the 60s and 70s, which was the focus of this exhibition. Thus, in contrast to her younger Chicago contemporaries and, in many cases, friends and fans (Roger Brown, Gladys Nilsson, and Jim Nutt), Ito developed a largely abstract vocabulary to evoke an alternative world. She was neither a pure abstractionist nor did she work flatly, which meant she went against the grain. In addition, she carefully suggested space, which for an abstract artist working between the 50s and the 70s was artistically akin to announcing that you had leprosy in a crowded auditorium. In her art, she both embraced and celebrated the isolation that had been foisted on her in life.

Born in California, Ito’s parents returned to Japan in the 1920s so that she and her sister could have a traditional Japanese education that included calligraphy and art lessons. She studied art at the University of California, Berkeley until shortly after Pearl Harbor, when she was imprisoned in a Japanese-American internment camp. While at Berkeley, Ito saw a large retrospective of Picasso, which had a profound influence on her work. Despite her internment, she managed to continue her education and eventually attended Smith. In 1944, she received a scholarship to study at the Art Institute of Chicago, and ultimately settled there.

Ito’s mastery is rooted in her ability to achieve subtle tonal gradients and shifts within a highly structured, largely geometric composition. She begins with an undercoat over which she often lays a contrasting color, which is arranged in parallel bands of slightly different hues. The contrasting color sets the key for the other colors and tones she will incorporate into her painting. Also, the contrasting color of the undercoat activates both the parallel bands of tonal hues and fields of carefully modulated color, as well as imbue them with a delicate opticality. The subtle tonal modifications and carefully articulated modulations tilt our attention away from the image, back toward the painting, and the attention Ito has paid to surface and color. The tonal gradations present within a single, clearly defined band are the result of carefully laid down brushstrokes, all going in the same direction, a sustained action that requires an incredible amount of attention.

In moving between looking at an image of what we believe to be a thing and looking at a surface made up distinct, but closely related, shifting hues and clearly defined, modulated areas, we echo the formal tension between the painting’s flatness and spatiality. This echo is further complicated by the tension between symmetry and asymmetry. Diagonal bands don’t line up across the surface, and visual echoes differ in scale and placement. It’s as if a temblor has ever so slightly shifted a deeply personal and private world, and nothing in it can ever be put quite right again. The tacks that encase some of the paintings underscore this feeling that we are looking at the after effects of an unnamed rupture. Evidently, Ito used the carpet tacks to hold her paintings to the stretcher; they could be taken off so that she could go back into the painting. At the same time, the tacks become a minor visual irritant; they buzz on the edges of our sightline as we scrutinize her paintings, which reveal themselves slowly. One also senses that the tacks might have been meant to recall the need to be able to leave quickly with what is most precious, to be able roll it up rather than leave it behind.

Ito’s paintings quietly enthrall us with their coloristic and tonal shifts, each of which is used to indicate the existence of a different thing, whatever it might be. Her diagonal bands and angled geometric shapes evoke spaces that are partially hidden from view. A half-open drawer is the nearest thing these spaces call to mind. And the slanting, parallel bands surely remind one of slatted wooden furniture, traditional Japanese cabinets, tabernacles, and tables seen from an odd angle, but whatever image she conjures up almost always dissolves back into being a painting whose allusiveness and partially hidden domains convey a private world. One is reminded of how easily children can imagine a box to be a boat, a dresser to be castle made up of many hidden chambers.

To her credit, Ito bumps this secret world right up against something larger. In her juxtapositions of carefully arranged diagonal bands to modulated areas, often in red, blue, or pale green, one senses that the artist was bringing together the domestic and the celestial, the private interior world inhabited by the individual and the empyrean realm which dissolves all traces of one’s personality. Thus, she neither fetishizes the private, nor makes it into something precious and frozen.

Miyoko Ito is to Chicago Imagist art what Myron Stout is to New York abstract art, an artist who out of necessity went her own way. The result is not an eccentric stance or style, but something deeper and ultimately more resonant and satisfying. Like Stout, Ito’s analytic intelligence is everywhere to be seen, but at no point does it overwhelm the inherent mystery of her sensual yet restrained world. Her highly focused devotion to tonalities and hues shares something with Stout’s rigorous calibrations of edges and curves. And finally, in her transformation of things lying around the house, Ito anticipates the animated presences of Elizabeth Murray. It isn’t enough to say that Ito’s work warrants our attention, which it does. It deserves both a monograph and retrospective as well.