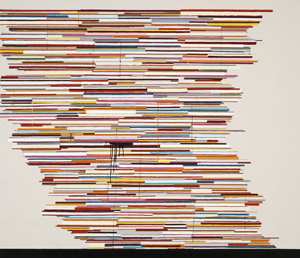 Rob Nadeau works without traditional narratives. Nevertheless, as his first solo exhibition of abstract paintings and drawings with Mixed Greens makes clear, he is a storyteller at heart. His visual accounts are sparked by vivid elaborations on the manifold ways that color and form can be applied to manipulate the pictorial plane. Or, as he puts it, how his images “travel, collide, rupture and evolve to develop cross-sections of an animated, abstract world”. Within these analyses structural components, such as biomorphic shapes, swirls, splotches of color and thick drips are turned into protagonists who act on the larger plane. While Nadeau’s fictions unravel, they become characters whose unique trademarks, their edges, textures, and density, help to transform them into personalities of humor and wit.

On the surface, “Seep” (2005) can be described as a gigantic, slightly twisted stack of horizontal strips that form a rhythmic pattern. Earth tones, such as rich mustard yellows and burnt sienna are contrasted with Renaissance turquoises that might bring washed out Tuscan tiles to mind. Set against a light brown background and resting on a black “floor,” this tornado-shaped conglomerate has one obvious Achilles heel: a black leak disturbs the overall color harmony. Searching for possible interpretations for this flaw, a range of ideas develop while contemplating black as metaphor for the absence of light and life or, politically, oil. I am reminded of Nadeau’s statement: “I am drawn to a painting’s ability to offer an immediate image and reveal itself slowly over time.” In other words, each work holds a secret message that is accessible to the viewer and depends on his or her personal history. Here lies the key to Nadeau’s work, underneath visually intriguing surfaces lie a unique cosmos, which, sprung from the artist’s imagination and experience, encourages the audience to reflect on themselves. The painting functions as a transmitter of the intangible aspects of spirituality or nostalgia and becomes a dream catcher for our thoughts.

With this in mind, the angular shape made of silver duct tape that takes center stage in “The Rise of the New New Imagists” (2006) gains another meaning: the characteristics of the silver allow for a faint color reflection; a mere shimmer tells of those who get close enough. Though the viewers are not a physical part of the work, the sheen acknowledges their presence. Ever so slightly, the work is altered according to the position of the audience and in this context the physicality of the work is defined by the reality of the viewer.

“Untitled” (2006) is made of two adjoined panels of different sizes; the right one appears to be the smaller sibling of the left. Their backgrounds are painted in shiny silver. Banners of multiple colors run diagonally towards an upper center, which are cut off before converging in one point and hence, remain fringes of independent thoughts. As much as they lead into the composition they radiate toward its edges. In the most literal way, yet rendered in completely abstract manner, these manifest as dynamic paths that guide and connect the viewer’s gaze to the undergrowth of Nadeau’s world.

It is here, when deeply involved in the painted matter before us, that Nadeau’s stories are the most inspiring and transform their subtly orchestrated twists and turns into haunting images.

Jenny Snider: A selection of paintings, drawings and sculpture, 1970 to the present

Jenny Snider is a fiercely independent artist who is deeply steeped in film culture, which has inspired her way of viewing her own life and times as inseparable from political history and the lives of the cultural figures and film makers whom she admires. As Snider said in a recent gallery talk, her work has never been based on “what was in the galleries,” which is a way of noting her outlier status in the art world.

Eight of Ron Gorchov’s classic paintings on shields, executed in the late 1970s and early 1980s, are currently on view in the new uptown gallery of Cheim & Read. Two of them arch out vertically, while the others are horizontally oriented. None, needless to say, are either rectangular or flat.