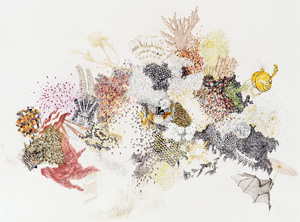 Brooklyn-based Marci MacGuffie works with abstract patterns, not only in a decorative sense, but also as part of a larger observational process. She analyzes physical reactions and mannerisms, which can either refer to actual interactions between her audience and work, or more symbolically, they can refer to renditions of the effects outside forces can have on nature.

A sprawling installation at DUMBO’s Smack Mellon in 2005 revolved around movable wall magnets, which were meant to animate viewers to engage with, and in the end, alter the piece to their liking. No boundaries were set and a video camera documented a large variety of differing audience reactions, ranging from timid to bold, from serious to lighthearted. Whereas some participants completely changed large sections of the work, only moving a single piece to the side satisfied others. In a metaphorical sense, this work first exposed a spectrum of multifaceted behaviors, before uniting their diverse positions on videotape. This research in contrasts is the basis of MacGuffie’s inspiration.

At Baumgartner Gallery, a painting, several drawings of great detail, as well as a sculpture entitled “Xenolith”, made of a dragonfly, fossil and a wasps’ nest on Plexiglas, are parts of the signature style vocabulary MacGuffie calls her language. Her imagery is rooted in the organic and embraces the fluency of biomorphic shapes; intricate drawings based on the innumerable repetition of forms are a staple. The obsessive concentration entailed might bring to mind the work of Yayoi Kusama, yet here, the seemingly endless motion of the artist’s hand becomes a vehicle for meditation. “Sport and Pageantry” (2005) and “Arizona Blueberry Roost” (2005) are vibrant melting pots for enchanting renditions of floral forms, webs, animal skeletons, abstract ornaments, corals, stars, pollen, parts of pinecones and honeycombs, zigzags, bricks, leafs, snakeskin, spider legs, hair, and fur, for example. Like mosaic stones or patches of a quilt, these sections are fused into a larger dynamic whole. Together, they become an honest homage to the diversity of textures, color, and form in nature that for centuries has functioned as muse to the arts.

MacGuffie’s paintings and drawings all play with this content and inform her large-scale installations, an example of which has specifically been created for Baumgartner’s West wall. Though her current show does not anticipate the physical interaction between the audience and exhibited works, there are plenty of opposing forces, elements of calm and upheaval with which to engage. Blown up into new proportions, elements previously observed only on the two-dimensional plane enter a new realm as they envelope the space with determination. The small drawn details have been translated into broader strips of paper, which then are at times painted on and often collaged into complex clutters of splendor. Swirls, if not the occasional tornado-esque spiral, provide a sense of directorial movement. In an effect reminiscent of wind in a cornfield they become quite reliable guides.

So alien and yet with the seductive hint of the familiar, MacGuffie’s work is exquisite in its combination of mystic beauty and chaos, but more importantly, it is an enthusiastic plea for the peaceful co-existence of opposites.

It is a brisk late-August day in Berlin and I am at the Radialsystem V, the former water purification plant flanking the banks of the river Spree, which the choreographer Sasha Waltz and her longtime collaborator and partner, the dramaturg Jochen Sandig, converted into a multipurpose art venue a decade or so ago. Though I have visited the space on numerous occasions in the past, the spacious lobby, as well as the expansive performance hall of Radialsystem, seems almost unrecognizable, having been stripped of the usual vestiges of a performance venue. I am here to see EXODOS, a new immersive dance-theater work by Waltz, and to speak with her about her company’s upcoming US premiere of Kreatur, which lands at the Brooklyn Academy of Music in early November as part of the Next Wave Festival.

The ushers at the New York City premiere of choreographer Pam Tanowitz and pianist Simone Dinnerstein’s New Work for Goldberg Variations at The Joyce Theater warn me that the program is 75 minutes—75 minutes!—with no intermission. It’s possible they have to tell me this, but either way, the length of Bach’s “Goldberg Variations” (which, apocrypha alleges, he composed in 1741 as an anti-Scherezade to help an insomniac count finally sleep) intimidates.

Featuring more than 100 works of art from 70 museums, Nature’s Nation explores three centuries of creative activity by diverse makers in a range of media.