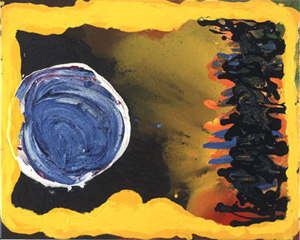 Jules Olitski’s The Seventies opened at the Paul Kasmin Gallery last month with a flurry of activity. In attendance were some of the preeminent figures associated with American abstract painting of the past four decades. The mood was celebrative, to say the least. Olitski sat in his wheelchair with a constant circle of acolytes surrounding him as he held forth in his typically gregarious manner, entertaining friends and art world acquaintances, many of whom he had known for the better part of his career. As I absorbed the monumental color field paintings and scrutinized the circular bands of steel sculpture on the floor—representing two important aspects of his work in the seventies—I recalled that Olitski was the first living artist to be given an exhibition in 1969 at the Metropolitan Museum of Art by the curator Henry Geldzahler. From the point of view of critic Clement Greenberg, Olitski was the most important living American painter since Pollock—a claim that has been lauded by some, and questioned by others.

I remember hearing Olitski speak about his work at the New York Studio School in 2004—one of the best talks by a painter I can recall hearing there. Like Greenberg—with whom his name is often associated—Olitski consistently presents himself in an off-hand manner. By this I mean that he is not one to foreground theory in order to justify what he is doing or to prove himself as an artist—a misconception that has become an epidemic in current art world rhetoric. With Olitski, the talk is plain talk. Better said, he speaks from his inner-conscience without trepidation with the understanding that if he cannot communicate what he is about on this level, the words are not worth saying. Some call it charisma while others read him as a legacy from another era—an era in which theory was beside the point and the sociology of art was irrelevant. This division of artists into generational groups has virtually nothing to do with the function of art. For Olitski, his presence as an artist—not necessarily his recent oeuvre—is as significant today as it was in his most productive years—the years, in fact, represented at the Kasmin exhibition. While not all of his work may exist on the same qualitative level, enough of it does to make the difference. One could say the same about Pollock. Sometimes he hit it, sometimes not. But as an artist he endures aesthetically and historically. This is the real issue behind Olitski.

In the seventies, Jules Olitski was far ahead of the pack. His position as a so-called color field painter was difficult to dispute. Between 1973 and 1974, he moved from sprayed to poured and squeegeed surfaces, working the paint back and forth, up and down, layer upon layer, always in search of the perfect non-color, it seemed. (By “non-color” I refer to some of the glazes used on ceramic vases during the Ming Dynasty in China, and later developed through various techniques in the Jeollanam-do region in South Korea during the Joesun Dynastic in South Korea.) One might regard this profound moment in Olitski’s oeuvre as a truly great period. The painting “Absalom Passage, Seventeen” (1973) is an affirmation of another possibility in the pursuit of all-over painting, a concept that Greenberg delimited earlier in relation to Pollock, indeed, in relation to the painterly abstractionists (Abstract Expressionists) in general. In contrast to the exquisitely controlled Baroque lightness of Pollock’s “Autumn Rhythm” (1950), Olitski offers a saturated field of non-color, so evenly distributed and so effervescent as to catch the eye off-guard—as if the optic nerve were an organ with an independent mind. One simply enters the field as if form and space had no division, as if the subjecthood of the viewer and the objecthood of the work were inseparable.

From here Olitski moved his canvases back to the floor, pulling and pushing the acrylic paint from all sides, constantly focusing on the intervention of the marks (in contrast to the gestures) and granting precedence to the inherent power of visual nuance. A slip here, a sideswipe there—Olitski would bend and pull and then retreat, take a drag on his cigar and push again. The matter was an intuitive one, aleatory in one sense, yet with a subtle harmony of the body and mind interacting upon and within the pictorial field. Take a look at “Bronze Emperor, Two” (1974) or “Sahny, Three” (1975). The integrity of these vertical fields picks up from Barnett Newman whose hard-edged stripes—or “zips”—partitioned broad, flat fields of color either at the edge, in the first case, or running down the center, as in the second. Either way, there is the reminder—the specter, so to speak—of the zip. For Olitski would never be as literal as Newman, never so premeditated. The marks and gestures would evolve according to their own logic as a result of the artist’s concentrated effort—the sheer mental and physical force—that it takes for such paintings to come into existence. In this regard, we can say that the expressive content of these Seventies works is less imposed than it is spontaneously generated, like a sudden tremolo from the keyboard of Thelonius Monk. These paintings do not reside on the surface, but are thoroughly integrated into it, transforming it into the operating arena of a primal drive toward wholeness. In so doing, he retrieves the field and gives it a presence, a reality of its own.

Olitski’s was a particularly robust late style. His paintings from the 2000s are both the apotheosis of a lifetime in art and a voyage into new pictorial territory.