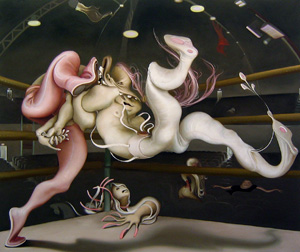 You get it? That “it” is the punch-line to the joke, the plot of the narrative, the moral to the story. With this latest group of paintings at 303 Gallery, Inka Essenhigh wants to make her points clear and tell her stories more explicitly. To those ends she is probing the boundaries of one of the last taboos of advanced contemporary painting, “illustration.” In our weird world, for an image to carry more literal content, it seems bound by the physics of perception to devices most closely associated with realism, namely perspective, chiaroscuro, modeling, etc. In Essenhigh’s case, with her stretched, bending and undulating forms, there are the added requirements of the highly delineated detail, the sleek contour and the precisely illuminated blob in creating her believably Surrealistic illusions.

Over the past several seasons we have witnessed a satisfying, if at times troubling, course change in Essenhigh’s development. This might be due to the fact that she emerged early on as one of New York’s freshest hopes for painterly stardom, and as such her artistic, business and social circumstances—like the affairs of starlets on the covers of supermarket tabloids—are under constant public scrutiny. Perhaps with these paintings it’s payback time, her opportunity to poke at the gawkers. But in doing so she has individuated the more ambiguous characteristics of her figures into sharply articulated—though distorted—faces and bodies, injecting cheesy humor into images that had heretofore retained an abstract reticence. Peter Saul’s garish, bulbous and contorted comic figures come to mind. However, whereas Saul’s pictures carry the brash, flatfooted excesses of Proto-Pop and the Katzenjammer Kids, Essenhigh’s wacky images possess a distinctly feminine sensibility—a kind of fantastically mannerized Rocco, a Middle-earth Elfin princess with a mischievous attitude.

Since switching from the glossy enameled finishes and subtle designer color schemes that brought her initial recognition, Essenhigh has maintained her immaculately homogenous surface and crisp rendering through a traditional matte oil medium. Each picture is keyed to a specific range of analogous hues. Contrasts are achieved through tonal rather that chromatic variation. In “Setting Sun” (2005) a jubilant figure strides forward through an arcing curtain of greenish-yellow light, a glowing mass of Art Nouveau tentacles at the apex of the arc illuminating the scene. Long undulating leaves, curling elongated feet and an overall murky, sea-green cast all lend the impression of an underwater tableau as seen through the plate glass of an aquarium.

These new works, rather that embodying notions of taste, fashion, and style, have instead passed through these criteria like a Trojan Horse to a more subversive and satirical content. With her eye for the telling detail, Essenhigh uses these concepts to parody and lambaste those for whom they are still relevant. In “Wrestlers” (2005), under the vast dome of a beige-brown sports arena, an enthralled female spectator watches grapplers from a corner of the ring. The length of her beautifully manicured, curling pink fingernails reduce her hands to mere decorative claws, echoed by the shoulder straps of one contender’s leotards as he struggles in knotted conflict. Is this a jab at fashion affectations that approach the life threatening, or at our culture’s infatuation with the grand spectacle of phony combat?

A hard driving go-getter in his summer whites dashes through “Subway” (2005). His nose held high, he seems to melt his way down a staircase to jump into a subway car, cutting through a milky tide identifiable as other human beings only by a looming, exposed butt-crack and scurrying feet stuffed into conical, torturous-looking shoes. The prominence of the seductress with her low-slung waistline and comically exaggerated haunches implicates the viewer in this episode of everyday voyeurism as much as it lampoons the casual exhibitionism of the gaze’s unobscured object of desire.

The best social critique ought to be so sharp that the pain isn’t felt until the scalpel is pulled out. Through her technical prowess and stylistic panache, Essenhigh has attracted a considerable following; are her bursts of satirical shrapnel mangling the hand that feeds her? To tabulate her current effectiveness, do we need to take a fashionista body count?

Eight of Ron Gorchov’s classic paintings on shields, executed in the late 1970s and early 1980s, are currently on view in the new uptown gallery of Cheim & Read. Two of them arch out vertically, while the others are horizontally oriented. None, needless to say, are either rectangular or flat.

The women in Ivelisse Rodriguez’s debut collection differ in age, opportunity, and background but all share one commonality: they want to believe in love. But in a culture where they are taught that to be in love, to be desired by a man, is paramount and that little else matters, it is difficult for any woman to survive. Rodriguez’s women (and one boy) are complex, well-wrought, but cannot teach us anything except perhaps how to believe in or to survive love. These nine stories present a complex, multifaceted, and somewhat connected narrative of Puerto Rican life.