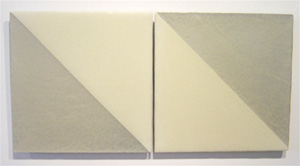 For over thirty years, New Mexico based artist Florence Pierce has been developing richly nuanced, low relief resin and pigment paintings. In their elements of monochrome, experimental mediums, and sense of seriality, these post-minimal, reductive works place her both in the tradition and company of Kasimir Malevich, Wassily Kandinsky, Ad Reinhardt, Agnes Martin, Barnett Newman, Robert Ryman, and Robert Mangold. However, unlike some of these artists, the consistent element in her work has been what the artist calls ‘a meditative quality and Zen-like “stilling of the mind” simplicity’—a state she achieves by orienting her work with shapes such as squares, rectangles, triangles, lozenge forms and polygons. Surprisingly rich in color and complex in their material qualities, these resin and pigment paintings reveal themselves best to the viewer in person and, in this regard, Pierce shares much with innovative artists preoccupied with the properties of light.

Pierce was born in Washington DC, in 1918 and, unbelievable as it sounds, this was her first solo show in New York. At eighteen, having become serious about art, and spiritualism in both art and in New Mexico, where her grandparents lived, she convinced her parents to allow her to travel alone to Taos to study for a summer with the noted artist and follower of mysticism in art, Emil Bisstram, at his Studio School. Two years later she returned to New Mexico and was asked to join the Transcendental Painting Group (TPG), led by Bisttram, and Raymond Jonson, where she met her husband, Horace Towner Pierce, who was also a student. The goal of the TPG was to “carry painting beyond the appearance of the physical world through new concepts of space, color, light and design to imaginative realms that are idealistic and spiritual.” Although Pierce did not eventually accept all of the manifestos and organized group thinking of the TPG, the core concepts of transcendental art became embedded in her work. Before settling permanently in New Mexico in 1955, where she raised her family, she lived for a brief time in New York City, Washington DC, and Los Angeles.

The exhibition is an intimate overview of twelve abstract paintings dating from 1983–2002; it consists of geometric shapes including several 16” x16” squares and other larger shaped pieces such as a 72” cylindrical form, and a 46” x 41” triangle which are mainly monochromes in shades of whites and aquamarine. Pierce pours layers of resin over mirrored plexiglass encasing colors, as well as occasionally adds milled fiberglass to dim the reflection and to alter the colors or forms within the geometric forms. The paintings are mounted so that they float off the wall, underscoring the rough, uneven edges and delicately nuanced surfaces. By pressing parchment into the setting surface, the artist is able to create modulations that vary from tiny ripples to larger wave-like undulations. To her credit, by rejecting a regularized pattern in these larger undulating surfaces, she is able to nudge the cerebralness of the geometric shapes into a domain that is more emotional and experiential (temporal). Subsequently, this modulated impression is covered with layers of translucent or transparent resin. Finally, after the last pour, she both lays down and removes vellum from the setting surface in order to get a matte surface, thus quieting the reflectivity of the under layers and mirrored support.

The result of decades of experimentation, these thoughtful works reveal a vitality of search, of mental and physical engagement, that is not often found or (sustained) in work of this type. They are poetic, compelling, and quiet works that invite the viewer to pare away filters of cognitive analysis and to engage with the intuitive mind in the act of seeing. “Untitled (White with Cross Stripes),” 1991, is a small cream square with a cross centered an inch in from the edges. It appears that the artist placed a strip of white paper horizontally in a surface that looks like wet snow and pulled it up, leaving behind its impression, and then simply laid it down vertically, allowing one to mentally trace and replay the action. “Untitled #513 (Blue Green)” is also a 16 inch square piece, which, like a dark Ad Reinhardt painting, beckons (as if in a whisper) for the viewer step in for a closer look. Tiny surface ripples and a slow greenish glow at the base conjures thoughts of the sea at night when a small breeze awakens the placid surface. Like the other works on exhibit, these two works cannot be fully experienced from just one angle and changes dramatically as they are viewed from different angles and in different lighting conditions. Through their extremely quiet coloration and slow gesture, both of these small pieces achieve the sensations of expansiveness, action and time. Despite its relatively lengthy incubation and its links with work that was more popular decades ago, Pierce’s work feels as fresh and new as tomorrow.