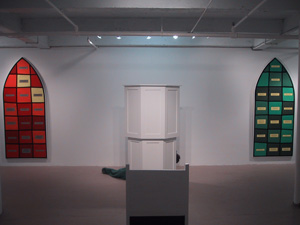 Transforming Schroeder Romero into an Interfaith Center to explore the hypocrisy of organized religion as an increasingly corporate system is not much of a stretch for Eric Heist. He is an uncompromising artist whose practice of institutional criticism in his previous solo shows has touched upon American military and economic hegemony.

The parallels he draws between the overt commodification of religion and art create a disturbing sense of familiarity. There is a creeping horror that the illogical, faith-based debate swirling around the gallery walls isn’t very different from the current hysteria about the art world.

Going to the galleries in New York has an underlying and not often discussed ‘spiritual’ component in the rituals and routines of the art world. People quietly, reverently approach the art with a seriousness that borders on a religious pathology. It is a secular activity, that is a powerful belief system unto itself.

The explicit subject of Heist’s critique is shown in a series of medium sized, gouache paintings of the Evangelical Crystal Cathedral in Orange County, California, a spectacle of glass and steel. While the monument to wealth and power is clearly in contradiction with Christ’s teachings, it reflects the rise of the reactionary Evangelical right in America.

Heist shows various preachers exhorting the worshippers to enjoy work “You are working for God. Smile when you get there. You are mine!” in a video montage, “Interfaith Center: Q & A Forum,” that demonstrates how seamlessly Evangelical Christianity merges Capitalist ideology with service to God and by default, the church.

Meanwhile, he humbly and hilariously proposes that God is indeed beneath a stone and inside a piece of wood in a series of white-washed Pews inside his signature glass vitrines. The sculptures are a response to Christ’s own teaching, “It is I who am all things. From me all things come forth, and to me all things extend. Split a piece of wood, and I am there. Lift up a stone and you will find me.”

Beneath “Pew (mirror)” (2005), the crushed disco-ball extends Heist’s critique from the religious to the secular beliefs in art objects as financial investments. The disco-ball functions something like the Crystal Cathedral in contemporary art, a sign of decadence and style outweighing ideas. The emphasis of contemporary art has been reduced to the surface like the slick, glass spires of the Cathedral.

Yet, instead of retreating from art Heist embraces it and engages in some rather righteous institutional criticism. In “Artist Talk” (2005), a shrouded self-portrait of the artist lays prostrate beneath a white washed altar. It signals dually the artist’s own reluctance to preach his beliefs, and the commercial art world’s refusal to acknowledge the problem of commodification by reducing art to a constant state of transaction, rather than tools of communication and critique. The Evangelical Church wants its followers to associate spiritual well-being with wealth, as the art world and the ballooning market equate artistic success with sales and the rapid inflation of prices at auction.

In “Interfaith Center: Extremists” (2005) a quote from Jerry Falwell states “I hope I live to see the day when, as in the early days of our country, we won’t have any public schools. The churches will have taken them over again and Christians will be running them. What a happy day that will be!” The surrounding wall texts, in the form of faux stained glass windows constructed of paper and felt, encompass the historical and contemporary conflicts surrounding religion. The nearly schizophrenic debate between devout extremists, religious believers and unifiers, and secular critics is a minefield of hysteria that defies analysis even as it suggests that it is the interpretation and expression of beliefs that cause the horrific conflicts associated with religion from war to oppression. A quote in “Interfaith Center: Critics” (2005) from Denis Diderot states, “Man will never be free until the last king is strangled with the entrails of the last priest.”

This potential for violence and oppression over faith is the most horrifying aspect of the installation. It transcends commerce and raises the life and death struggles that have followed religion throughout history. While Heist’s awkward sculptures resist easy consumption the entire montage of text and images engage in a substantive critique of a loaded, difficult topic. As another Interfaith critic Aleister Crowley said “If one were to take the bible seriously one would go mad. But to take the bible seriously one would already have to be mad.”

The more subtle aspect of the installation is how the critique functions as a metaphor for the art world’s own market driven self-absorption. There is nothing essential about the value of art, only our belief in it, and Heist carefully articulates the dangers of such faith, especially when it is wrapped in a modern shell and marketed with promises of wealth, vitality, and power.

Endgame: Finance and the Close of the Market System

We live, as some have suggested, in an interregnum between a dying regime and some unknown successor.

In politics, the culture war between the “woke” and the unrelentingly unwoke rages on, and we might count casualties in the results of the upcoming 2022 midterm elections.