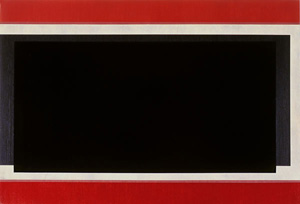 One weekend I visited three different artists’ studios, including Don Voisine. All three are abstract painters, and I noticed that each of them was listening to blues music. It's just a coincidence, but I feel that it is also somehow indicative of our time. Blues can often be uproariously comic and bitingly incisive too and, despite the name, the blues are anything but one dimensional. In some sense this is also how I feel about the painting of Don Voisine which is often dark but never of a singular mood.

It strikes me that Voisine, whose preferred palette is dominated by brown and black, employs these colors because he is interested in tapping into the longer history of painting. As with many other artists before him, Voisine is “trying on the brown suit of old master painting.” His current exhibition at Metaphor Contemporary Art is a wonderful surprise. Browns and blacks continue to dominate large areas of the work, but the viewing experience itself is enriched by an expressive and expansive palette that includes the following colors: tomato red, magenta, pink flesh tone, flare orange, golden ochre, Naples, optic, lemon yellows, chartreuse, chrome, lime green, green gold, King’s turquoise, powder, and cobalt blues. I’m not prepared to call Voisine a colorist, but this work is colorful.

Voisine’s use of black typically has been warm and generative, creates a vacuous volume within the center of the work. It tends to open up his otherwise tightly structured compositions and work something like a darkened theater proscenium. A clearing is made for a proposed dramatic event. At times, his paintings feel like the unsettling experience of walking into an empty, cleared out room.

In Major League Baseball there is a blackened section of bleachers located behind the centerfield wall called the Batters’ Eye. The Batters’ Eye allows a hitter to track a 90 mph. fastball against a contrasting background. The dark areas of Voisine’s paintings function similarly. The open expanse draws the eye towards the center, and then releases the gaze, allowing access to all of Voisine’s quirky structural subtleties and their shifting cadences operating around the perimeter.

Voisine’s painting is born from utility. This is the foundation for both their fundamental strengths and weaknesses. His enormous fondness for squares alone speaks of their practicality, and in the past, many of Voisine’s no-nonsense designs were extrapolated from the actual floor plans of architectural spaces. Quite simply, this allowed him to make a color space feel like a physical space—something real and palpable as opposed to intellectually abstract. Working from a real ground plan also lent them a homier, cozier feel, qualities not typically associated with the idealistic trappings of high minded abstraction.

I find this ambition laudable, and American at core, but it can also be problematic in that it can lead to a kind of bland generality. Moby’s music was successfully created on this same premise, which is why it can be heard, anywhere: on TV, in a club, at the Super Bowl, in an elevator, at a furniture store, etc. It’s this kind of test-marketed and designed generality that the architect Rem Koolhaas once labeled “Moulinex Modernism.” It’s an unfortunate legacy of the Bauhaus’ original program. Abstraction itself is not as divorced from the general culture as to be immune from this taint of consumer based product logic either. I honestly think that Voisine’s work actively runs counter to this design-crime concept—significantly so—but any art that’s this reductive or flirts with superficially stylistic minimalism can be suspect. Anyone who has ever looked at Dwell magazine or a Room and Board catalog is familiar with this caveat. The practicality of a painting, its function, should never interfere with its poetics.

Voisine’s keen sense of scale is what elevates his art; it’s nuanced not noisome, and thankfully not overly refined. He often tweaks his work in the most matter-of-fact way; a line is extended here, another is trimmed or expanded there, etc. At their most successful, they are both uncommonly classical and simply unpretentious simultaneously. The new surfaces have achieved a higher standard of finish, and the deft interplay of matte and gloss is truly masterful. Perhaps, ultimately they are more soulful than bluesy. In that, I’m reminded of the late, great wicked Wilson Pickett, who once said of his own process “I harmonize and I customize.”

On the gallery’s “project room” mezzanine level Richard Bottwin’s “Blue Cubes” look like toughly constructed abstracted armatures: skronky, planar, and angular. In contrast to Voisine’s plain-spokeness, Bottwin’s work appears extremely exotic with its lavish use of materials (including Macassar Ebony and Zebra Wood Veneers). Enriched by excess, as opposed to overbuilt or gaudy, his use of applied color reinforces the overall feeling of maximum density. Despite some formal similarities between the two artists’ work, it is an exceedingly thoughtful pairing.

Don Voisine's show at McKenzie Fine Art proves that the precise navigation of an abstract fold has the potential to unfurl multitudes.