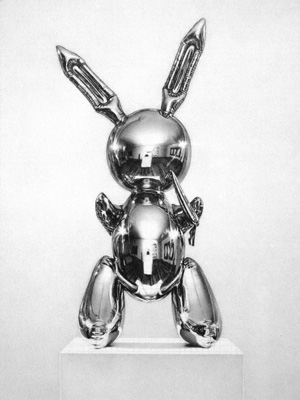 In this striking and introspective show, Dan Fischer continues his ongoing project of meticulously replicating photographs of famous artists in detailed pencil drawings. Working with only mechanical pencil and eraser, his drawings appear remarkably photographic at a distance, soft and velvety up close, and so dense in some areas that the black graphite powder sparkles as it catches the light.

The images Fischer appropriates are familiar: formal portraits mixed with shots of artists at work in the studio. His copies of portraits and self-portraits attest to the powerful role that the camera has played in building and sustaining artistic legacies. With the exception of a few offbeat subjects such as the performer Leigh Bowery (dressed in head to toe fetish gear), these artists are canonical. Some photos are ostensibly candid—Philip Guston drawing or Lee Bontecou sculpting, her face framed by the aperture of one of her welded steel constructions. Others are more self-consciously posed, like Andy Warhol in makeup and a blond bob wig, or Yayoi Kusama lounging nude amid raw pasta and her signature polka-dot patterns. Several are copied from actual artworks, such as the playful yet confrontational self-portraits by feminists Hannah Wilke and Ana Mendieta.

Fischer utilizes a grid to transfer his images onto paper and allows it to remain visible in the final works. But rather than leaving it as a sternly imposed overlay, he incorporates this functional structure into the network of the drawings, hiding it beneath the darkest areas and laying it bare in the lightest. It is an unapologetic reminder of his technical process, a simultaneous nod to the mechanics of reproduction and a foil to the mystique of the artist’s touch. The presence of the grid seems most fitting in an image of Piet Mondrian in his studio, where it serves as a uniform counterpart to the airier geometry of Mondrian’s canvases.

The grid is hardly visible in the image of Jeff Koons’ inflatable rabbit, giving it the most photographic appearance. This drawing is something of an anomaly in that Koons himself is not present. But the showman’s larger than life personality is so imbued in his sculpture that he doesn’t need to be included. This very photographic image has cemented the rabbit’s connection to Koons and his persona, lending the object a sort of inanimate self-consciousness.

In fact, these drawings are so permeated with big personalities that some visitors have assumed that Fischer is engaged in some form of criticality. But the gallery reports that he selects only images of artists who have influenced him. The impact of each figure on his production can only be speculated. In terms of artistic precedents, his practice seems most closely related to that of Chuck Close (whom Fischer has drawn, but is not present in this show): the meticulous copying of photographs, the visible presence of the grid, the focus on artists as sole subject.

Fischer may be practicing a bit of art historical hagiography, but the thoughtful nature of his project makes it more sincere homage than celebrity worship. Simply put, these drawings are meant to be iconic, not ironic. The title Strangelove therefore is presumably not a reference to Kubrick’s darkly comic satire, but a testament to Fischer’s awe of and admiration for people he has never met, but who have nonetheless left an indelible mark.