The Iris and B. Gerald Cantor Roof Garden
The Metropolitan Museum of Art 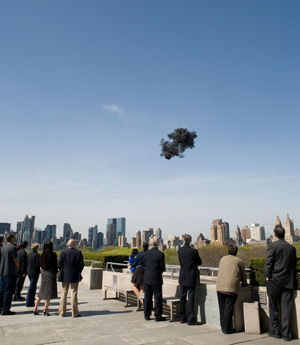 Four new artworks by Cai Guo-Qiang are now being exhibited on—and above—the Cantor Roof Garden at New York’s Metropolitan Museum of Art through October 29, 2006. Bringing even the sky into play, “Clear Sky Black Cloud,” three successive explosions each releasing a dark smoke-cloud, will appear over Central Park six days a week at noon for the next six months. Though a time-based event, clearly visible from the museum’s roof, the park, and surrounding buildings, it is definitively short and to the point. Given the ongoing U.S. occupation of Iraq, these firepower black clouds look ominously like anti-aircraft flak, especially when accompanied by shots loud as thunder. Still, they evoke springtime’s sublime kiss of bliss when they evanesce, enhancing heaven’s unblemished tranquility.

Such ambivalence is key also to his three earthbound sculptures, effortlessly integrating art, architecture, and Central Park’s gentle greensward. In the artist’s words, these artworks aptly situate us between “history and contemporary culture, mythology and fact, nature and civilization.” “Transparent Monument” is a 15-foot high by 9 ½-foot wide vertical panel of plate glass raised on twin pedestals in the middle of the sweeping roof garden. Six dead birds fashioned of fiberglass, papier-mâché, and feathers lie crumpled at the base of the glass, as if they had flown into it, clearly marking the often painfully abrupt intersection of nature with culture.

In a comprehensive if idiosyncratic synchronous narrative, nine green limestone slabs, in total 30 feet long, portray significant events since Sept. 11, 2001, relating the “uneasiness and fragility of our society at present.” This “Nontransparent Monument” elaborates more than 40 scenes, with figures, from Harry Potter to the death of Pope John Paul II, Hurricane Katrina to airport security checkpoints, carved in relief by traditional Chinese craftsmen.

Born in China in 1957, Cai Guo-Qiang first acted in Kung Fu movies, and has since curated the Chinese pavilion at the Venice Biennale. An internationally provocative innovator, when referring to his most famous artistic material he once said, “There are countries where you have trouble finding oil paint, but I have been able to find gunpowder wherever I went.” He currently lives in New York City, where—as if embodying some aesthetic paradox—he may have observed a hawk hovering over this beautifully subdued Met rooftop exhibit, utterly unperturbed by the artist’s threatening fireworks.

It is a sobering moment to imagine the sheer volume of artworks which at one point enjoyed a physical life on earth but now cease to exist. To collect them in a museum, Noah Charney writes, “would contain more masterpieces than all the world’s museums combined.”