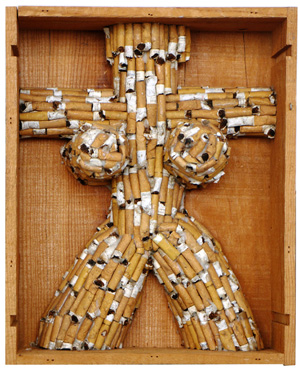 It is not easy to describe one of this unlikely master’s “un-assemblages.” It is an accumulation of objets trouvé, such as matchsticks glued to a board in swirling ovals representing breasts or their burned tips converging into a Bermuda triangle of pubic hair. It is an un-collage, a sculptural visual poem-object, a joke in a pun, with a twist and a wink and a bing and a bang. Aesthetically, it is an appropriation of mass-media images and a deconstruction spiced with an element of destruction, be it burning paper-fumage, torn posters-décollage, rubber-stamp frottage, etc.

In the middle of the gallery stand two neo-gothic towers made entirely of glued wooden matches; another sculpture, the curving “Wave,” is also made from burned matchsticks—both masterpieces of urban-folkloric artisan know-how. Don’t get me wrong: Al Hansen is a “naïve-educated” artist who learned from the best—such as Kurt Schwitters—and was also was inspired by the found objects and day-old newspapers he recycled from the trash heap. His “Mako Coffeebag Venus” is an exotic, silvery feminine dance figure made from coffee bags lined with tinfoil and newspaper headlines cut in strips to form lines of verse—an approach that transcends the old superimpositions and juxtapositions of the Dada/Surrealist tradition.

One of Hansen’s better-known images, “Venus” (more Willendorf than de Milo), recurs in various incarnations throughout the exhibition: one assembled from Hershey-bar wrappers dances with wild hair blown back; another made from burned cigarette papers imparts a static, submissive softness. Many others are composed of cigarette butts—big breasts burgeoning from encased boxes, frequently yellow or white, with or without filters—collected by Hansen and his grandsons on expeditions through the ashtrays of bars and cafes. The results include “Venus of Shop-Ritedorf” (1965), “Miss Stuff” (1967), “Calliope Venus” (1968), “AT&T Venus” (1993), all bursting with exclamations culled from Hershey-bar wrappers: HEY YES

This “Viking Dada” was an avant-garde art pioneer, the traveling kind, an involuntary cultural ambassador to Germany, Denmark, and other European cities. Dead prematurely in 1995 at age 67, he left a substantial legacy of work including collages, assemblages, artist’s books, photographs, writings, and videos. He taught at Rutgers University, Parsons School of Design, EAS in Greenland, and Hochschule Kunst in Hamburg. He also founded the Ultimate Akademie in Cologne, where he settled in 1980, establishing a following in the circles of the young avant-garde and continuing to collect items from the city’s bars, including beer coasters, cigarette butts, wrappers, and discarded magazines.

Hansen’s live performances, sometimes aided by inebriation or self-induced trance, were recently recreated at the Andrea Rosen Gallery during an event organized by daughter Bibbe Hansen entitled “3rd Rail Revisited,” named for the Third Rail Gallery of Current Art, founded by Hansen in Brooklyn. Grandson Channing was on hand to perform “Elegy for Fluxus Dead.”

A bohemian shaman of art, Hansen would seem somewhat out of step with todays Information Technology Revolution. He was interested in the process of creation more than in producing mass-made artifacts, though, ironically, his used mass-produced objects to create his candy-wrapper goddesses, match-stick muses and burned-cigarette-butt women.

In a letter to Art and Artists magazine (June 1966), Hansen vividly expounds on auto-destruction: “Several times I have pushed a piano off a building (first was in Berlin, 1945). It’s a wonderful experience…the only path to unique and personal art is through the door of experimentation. Destruction is a perfectly logical arena to perform in.”

Indeed, for such beliefs made manifest, Hansen is justly called the “Inventor of Happenings” and a founding father of Fluxus, conceptualism and visual poetry. He was prominent in the early 60’s downtown art scene, a member of the circle of artists that included Claes Oldenburg, Jim Dine, Robert Raushenberg, Ralph Ortiz, Nam June Paik, Ray Johnson, and Allan Kaprow. As Kaprow once said of him: “In the late 20th century…the image of the wandering artist, the hobo avant-gardist, seems anachronistic, if not self-conscious. Yet, Al Hansen cultivated the role—that’s what it was—with great style and charm.”