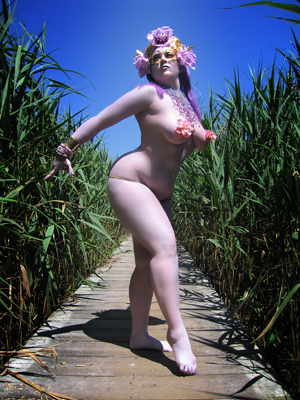 Shake it up: Dirty Martini in Red Tide Blooming at PS122. Photo by Steven Menendez

This begins with me chasing someone.

Taylor Mac is a whirlwind of streamers, the last notes of his song mixed with the clatter of piped-in helicopters. I run across upstage and attempt to apprehend him; he dodges and swoons. Finally I lead him out. Lights down.

This is how I know Taylor, from a show I did with Luke Miller in the summer of 2004, on the eve of the Republican National Convention. Taylor arrived onstage as a castaway, the beach he landed on part of the Kennebunkport compound. Assorted Bush family members were there a-frolickin’. Taylor sang them a song about a lover who “lives in undisclosed locations.” I was one of the storm troopers who took the beach. When the show ended, Taylor’s own show was set to begin and I loaned him an American flag I had draped across the outside of the theater (WAX: condos available soon). The flag was 8’ x 11’ with 48 stars and a rip on the striped side hastily covered in duct tape. Since then, Taylor Mac has had my American flag.

The National Arts Club is an overstuffed 19th-Century mansion/clubhouse on Gramercy Park. I met up with Taylor in the oaken bar area. He told me about the coming rehearsals for his new show, Red Tide Blooming, and that he needed to find a 70-something woman who was willing to show her crotch. Aye.

The night’s gathering served as a celebration of Circle East Repertory artistic director Michael Warren Powell’s recuperation from a recent stroke. Taylor’s involvement with Circle East, the descendant of the legendary Circle Repertory company, dates back to his first days in New York, circa 1994. In a large parlor, nine readers sat on a low platform and rose to read their plays at a podium. A Circle East member since his first days in New York, Taylor Mac (completely undercover in coat and tie) stands out because he holds a black ukulele. Eighth on the program, he introduces a new song from Red Tide Blooming.

The song is the tale of Lynne Cheney and Saddam Hussein, their similar literary ambitions (a moaning, lesbo-lust-time-piece novel for her, the abused-child-turned-knightly-desert-savior epic for him), and a first and last encounter between them, as imagined by Taylor Mac. Here Lynne attends Saddam’s execution as a representative of her husband’s government. Just before the gas expires his ass, Saddam shares a moment of recognition with Lynne, the kind of vivid but passing connection you might have with someone late at night on a subway, one that might lead to a torrid affair or silent regrets on the platform. In this moment, we’re no longer talking about a villain and a villain’s wife, but two humans, and an odd chill fills the parlor.

That chill comes from a few seconds of sympathy. By adding a dimension or three to these cut-outs of our present dilemma, Taylor brings us closer to the current alienation. Our perception is that these play with our fates like so many die, rolling everything away in another universe. With this distance from events and decisions, helplessness settles in and we look for easy-to-read humor in red and blue. Our impotence could not be plainer. Sympathy, then, is an ultimate weapon. With melody and an innocent’s awe, TM goes farther inside not just the emotions of these soiled thunder cats, but into the whole jungle we call “now.” Love, loss, embarrassment, ambition, fancy—we understand the emotions, and thus can move towards a real critique. This peaks when Taylor pauses and his eyes grow excruciatingly distant. It’s an uncomfortably familiar thing to watch, and sucks the air right out of the parlor.

A few days later, we’re in a smugly hip East Village pizza lounge to talk about the coming show. Framed by the annual 4th of July Coney Island Day Parade, Red Tide Blooming includes a treacherous J. Crew sweater, several of the brightest lights in New York performance art, and a Red Hippo. The hippo is a take on the Red Heifer, currently a shared icon of a group of Texas oilmen, evangelicals and orthodox Jews who believe that the sacrifice of a genetically pure red cow in a rebuilt Third Temple in Jerusalem will pop off the apocalypse. These people pay scientistsâ¦anyway, you can (and really, you should) Google that shit. But how does Armageddon tie in with the freaks and the Cyclone? Taylor holds that this whole gentrification thing is part of a general leveling going on across the country, a construction of sameness (same retail outlets, same chain restaurants) meant as a bulwark for scary things like discomfort, bringing us all in line before the end of days. There’s nothing particularly new about this theory, but it reflects the center of Taylor’s previous and upcoming work, for, as he says, “I’m discomfort, as a gender-bending artist, as a queer.”

By staking a flag in the moving sands of gentrification and a general tendency towards sameness, Taylor continues a tradition of New York artists who employed the outlandish and freaky as a critical contrast to the status quo. “I’m not doing new or different,” he maintains, “I’m just squishing a few things together, and it all stems from a theatrical history.” But what he’s doing—through the extraordinary costumes and make-up and the original songs—is all the more important because of the rapid leveling and commodifying of anything remotely unique about this city. People stampede to the newest American Apparel to get the proper uniform for not dancing or smoking, blowing right by the ruins of the Flatbush Pavilion movie theater that used to stand there. What will become of the individuals, the outcasts, the freaks? “The freaks will never go away,” says Taylor, sounding almost tired of defending the oddballs’ resilience.

He’s sick of “the tired ‘Used to Be’” and wary of the pissing and moaning from inactive or aging counterculturists who bemoan all change. Instead of mourning the days that included subway shootings and junkie flophouses (the 80’s: coming to every fucking museum near you), he asserts that we need to: 1) “Live a creative life,” rather than wait around for someone to hand it to us; and 2) Get smaller, e.g., “Salons. We have to get smaller. We have to appreciate the smallness.” This is in contrast to the usual mathematics of renown, and, as he points out, influencing 40 people is more powerful than barely touching 1000.

Red Tide Blooming will perform at PS122, where Taylor’s work has found a home and a vital supporter. The theater awarded Taylor the first Ethyl Eichelberger Award last year, providing an opportunity and stipend for this latest work. The award, dedicated to the groundbreaking drag performer whose name and quotes grace the PS122 dressing room, was a natural fit for Taylor, says PS122’s Associate Producer Andy Horwitz. “Taylor maintains the spirit of adventurousness and openness that Ethyl had.”

Horwitz believes community is another aspect of TM’s work that continues both Eichelberger and PS122’s mission. Speaking of Taylor’s 2004 RNC show, Live Patriots: Patriots Gone Wild!!!, he marvels, “This was the first time in a long time that all the downtown people were on stage at the same time.”

Beyond the political importance of his work, this adhesive effect makes Taylor invaluable. In Red Tide Blooming, the brilliant Julie Atlas Muz choreographs, Basil Twist provides puppetry, and some of the scene’s most prolific geniuses (see: Tigger) play a part in a work that’s more than an all-star variety show. Producing and directing this type of effort requires Herculean degrees of vision and patience but can reward much more than the sum of its parts. As Atlas Muz says, “In some ways it’s the smartest thing you can do. The trick with a superstar is to use all their talents.” Fortunately, she adds, “they’re very generous superstars, they’re not protecting themselves.” And indeed, we need this kind of brave collaboration to see not just the isolated gifts of performers like Dirty Martini, but the influences and ambitions that tie them together. By centering their powers on a subject like gentrification, Taylor builds a sort of Justice League of downtown talent whose combined weight impacts the entire galaxy. Heightening their dedication, many of these artists are veterans of the 4th of July Parade. “If they kick out those freakshows and build a mall,” says Dirty Martini, “I’ll go in that mall and perform. They’ll have to arrest me.”

So Taylor Mac can keep my American flag for as long as he needs it. What we need is a new way to wave our banners, one that looks at the hand holding the pole and the ground below the bearer’s feet and the trees behind and the walls in front. As performers and as an audience, it’s on us to take stock of our surroundings, shoring up what we hold precious, burning away the criminals’ veils, and holding fast to our fellows. When artists make work that won’t leave us off safe and falsely unscathed, so far from events and easily distracted by the next trifle, we ought to give them whatever heirlooms, tools, and texts we own to ensure that we don’t end up wandering through sterile culture malls erected atop the ruins of carnival grounds.

Brian Boyles is a theater writer and spoken-word artist.

This November, Graywolf Press released its ten-year anniversary edition of Notes from No Man’s Land; Biss’s compelling investigation of race and privilege in the United States remains as timely and relevant as ever.

If Wright’s “new tide” embodies the wave of social change that engulfed a segregated 1940’s America, Gordon Parks was an essential gravity that washed the revolution ashore.