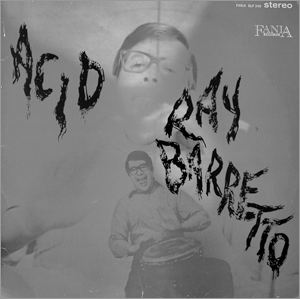 “¡Que viva la musica!” was hollered from Riverside’s pulpit above the open casket, which, being Barretto’s, was surely sized large. Replacing Mongo Santamaria for Tito Puente’s Dance Mania in 1957—the musical equivalent of joining Edmund Hillary for a Nepalese climb—Mr. Hard Hands worked with Charlie Parker and Wes Montgomery, and at the heart of the Fania All Stars. His Acid (among spring’s first reissues by Emusica from Fania Records’ revitalized catalog) heps the polyrhythmic New York Sound with late sixties soul. Barretto dropped Latin a decade back; the NEA made him a Jazz Master this year. An interview aired on WKCR’s twenty-four-hour memorial challenged today’s Latin musicians: “What I think is missing is a sense of history.” This article is dedicated to Ray Barretto, and to that understanding.

The Raices Collection at the Harbor Conservatory in the Museo del Barrio is a Smithsonian affiliate where The Mambo Kings researchers delved into archives for six months. The American Jazz Museum in Kansas City hosted a Raices exhibition last year: Puente and Machito scores, posters, and photographs. Begun in 1975 on an office shelf, its twenty thousand pieces now fill a temperature- and humidity-controlled room, with “some of the larger instruments housed in our classrooms,” director Ramon Rodriguez said on a recent visit.

Rodriguez and percussionist Louis Bauzo were “teaching Latin music, and at that time there was nothing published outside of ‘Besame Mucho.’ I brought in my arrangements, and Louis was playing with Tito Puente; we talked colleagues into giving stuff, and it started to snowball. We got National Endowment for the Humanities funding in 1978 and spent three years documenting concerts, interviewing pioneers. That grant died when Reagan came in, but we kept collecting, and musicians would give master classes: Barretto, Johnny Pacheco, Larry Harlow, who donated his Fania All Stars jacket.”

A 2007 memorial is planned for vocal great Vincentico Valdes, who left Cuba for the Bronx. “We’d made contact with his daughter and were able to get most of his music and paraphernalia. We’re also working with Ernie Ensley [a prime Palladium dancer who’s taped shows for decades]. He recorded first on a portable German reel-to-reel, but that acetate tape has a [limited] life—it needs to be transferred and digitized.” The massive timeline developed for NEA’s Jazz in the Schools mentions Machito, says Raices’ Nina Olson, “but not Tito Puente, Mario Bauza [Machito’s musical director], Juan Tizol [Ellington’s valve trombonist].” Or the fact that about eighteen members of the WWI marching band that first lit the Continent with jazz were auditioned in Puerto Rico by leader James Reese Europe. “The Schomburg Center for Black Culture at the Public Library sends out fundraising letters, making no mention that Arturo Schomburg was Puerto Rican. This music is so complex—it deserves to be recognized.”

The late John Stubblefield, Fort Apache’s tenor through their fertile 1990’s, referred to the band’s “magic triangle”: drummer Steve Berrios and the Gonzalezes’ bass and congas, extending the limber Latin rhythm-lock termed afinque. Of his 1980 union with the brothers, Berrios said “they had a jam session at Soundscape on Fiftieth St., about fifteen guys. We’ve trimmed it to five—more direct, to the point.” Fort Apache had a March week at L.A.’s Jazz Bakery, but “that’s not happening anymore,” said Berrios of such full stints. “I started at nineteen, six nights a week at the Alameda Room on Fifty-Seventh St. During breaks, I’d run to the Palladium for Puente and Machito, then to Birdland right next door for Miles or Monk.” Art Blakey’s Jazz Messengers was a crucial university for Berrios, as it had been for bandleaders including Wayne Shorter and Freddie Hubbard. “He’d say, ‘Don’t get too comfortable; this is not a post office.’” Blakey, like Berrios’ other distinguished mentors, “never spoke directly about technique. They would speak about politics, or boxing or baseball,” as with “another great college I graduated from, Mongo Santamaria’s band. It’s like the Sufis; it’s more subliminal teaching.”

In 1957, Cuban drum maestros Julito Collazo and Francisco Aguabella arrived with Katherine Dunham’s dance company. “My dad [percussionist in Marcelino Guerra’s ace band] took me to see them at Town Hall and the Apollo,” initiating a lifelong relationship with Collazo. “He taught me about Afro-Cuban religious music. Julito learned from great bata masters—Pablo Roche, Trinidad, Jesus Perez—and his mother was a very popular santera singer in Havana. He was flexible to play with dance bands, then be engulfed in the religious aspects of the music. He’s responsible for all the folkloric things that happened here before Mariel [the 1980 Cuban boatlift].”

Derived from traditional roots and mambo smarts, salsa flaunted cultural awareness with rock-era showmanship. Latino ballplayers powered the day’s championship teams—Roberto Clemente, Orlando Cepeda but-Nuevo Yorkinos still faced barriers as cops and politicians. Willie Colon’s first albums sported suave gangsta poses, while Eddie Palmieri and Barretto slung protest hits like “Justicia” and “Indestructible.”Henry Medina’s meticulous film archive covers Latin music from 1920’s Cuban rumba to today; a Walter Reade screening included Miguelito Valdés’ operatic charisma in a lavish Portuguese production. Trained in the High School of Art & Design and the street-savvy Young Lords, Medina spoke of radio’s sway, and of ex-Lord Eddie Figueroa’s Alphabet City club, New Rican Village, where Grupo Folklorico’s radical core assembled. “The Young Lords were students, part of the Puerto Rican left movement: they’d berate the war, talk about independence. Eddie had a title, like Minister of Culture—he’d figured out that what the Lords were doing was theater in the streets. When Carlos De Leon came on WKCR about 1971, he had Eddie and Andy Gonzalez up. Carlos was very astute, quiet but heavy, and the people he had on had heavy credentials: top acts like [Orquesta] Broadway, Eddie Palmieri, Pete “El Conde” [Rodriguez]. Grupo Folklorico did a live session—that was the respect Carlos got in the seventies.” Today, Medina noted, “it’s a whole different market—the club scene is gone, so a lot of the interest is gone.”

Giora Breil, partner in Emusica’s Fania reissues, counts on canny marketing, on strokes of fortune like the top Miami station’s new noon broadcast, La Hora de la Fania, and on sterling sound. “One of the first questions we asked was, ‘Do you have multi-track tapes?’” Breil said at his midtown hotel. Fania’s previous distributor said no; label engineer Irv Greenbaum said yes. The search led to a Hudson, NY, warehouse where label founder Jerry Masucci hoarded archives before leaving for Argentina. “This is obviously a treasure trove. In addition, Joe Conzo, Tito Puente’s historian, has made us aware of sixty Palladium-era 78’s never brought out as LPs.” Breil cites Mongo, Machito, and Barretto as other likely “locomotives to a general market. I think it’s more via rhythm—you can count on two hands the non-English hits in the U.S. If Tito Puente were Thelonious Monk, he’d sell millions, but he’s living in this Latin box. He doesn’t belong there—he’s a genius, and very, very important in the musical history of the United States.”

Parts one and two of this series are in the Rail’s online archives (May/June ’05). Next month: part four, featuring Yale’s top mambo freak, Robert Farris Thompson.

Will Corwin write about the Helen Frankenthaler Foundation and how it supports emerging artists while maintaining the legacy of its founder.