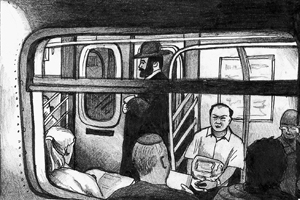 from The Second Life published by Columbia University Press.

Bob is a good, caring husband, though a bit boring. Case in point: When Betty went out to Manhattan this morning, he made sure he told her several times,

“Don’t forget to put a scarf around your neck. It’s bitter cold outside.“

“My pullover will cover my neck just nicely, thank you, “retorted Betty.

“Still, you should take the scarf as well. That collar is not nearly enough to keep you warm. “

“All right, all right, I’ll take it,“ Betty sighed.

“What about the overcoat? Aren’t you putting it on? “

“No, I’ll take the fur jacket instead.“

“Your knees will freeze. Besides, that fur jacket is no good—not without a hood, anyway. Better take your overcoat.“

“Well, you may put your fur hat on, but you should also have a hood. You never know. “

“Bob, that Russian fur hat is all I need. I bet it would keep me warm, even out there on the frontline.“

“All right, but take the overcoat, too. Do me a favor, will you? I don’t want to worry myself sick over this.“

Betty gave in, as usual. She was headed out to the Lenox Hill Hospital where a cousin of hers—also well past sixty— was recovering from a hip-replacement operation. She was going to bring her some pies and poppy seed coffeecake she had picked up at a Russian store in Queens, the borough where both she and Bob had been living for more than twenty years.

“And, watch your step. It’s slippery out there,“ he added, for good measure, as Betty was positioning the fur hat on her head, wrapping the scarf around her neck and pulling the hood on—all under Bob’s protective gaze.

“Jewish men make the best husbands,“ her mother had told her on several occasions. “They are good, decent family men, down-to-earth and full of common sense. They just know how to take care of children and will not leave you, even though they might, on occasion, cheat on you.”

They had had a pretty decent marriage, even though there had been no children. Bob had taken good care of her, practically spoiling her, in spite of his occasional annoying possessiveness. He was a thoughtful, careful man, full of foresight, always trying to avoid danger in whatever form, lest he should tempt fate. He was fearful and prudent, avoiding the unknown, a man who felt at ease only in places and among people he knew very well. He was steady and prosaic, not given to adventure or overexcitement, preferring instead the security of the commonplace; the blandness that made him feel he was in control.

“You’re boring me, Bob,” Betty would say to him quite often. “Boy, you’re such are nag!” And her voice, otherwise soft and pleasant, took on a Bovary-like tone of desperation. “You know what? I’m quite capable of taking care of myself. Anyway, we can’t go on living like this.”

“You know what I mean: this programmed kind of life, down to the smallest detail, always trying to avoid the slightest mishap; dodging everybody and everything.”

These outbursts of rebellion always managed to put Bob in a blue funk. Thoroughly frightened, he would ask her in a plaintive mode,“Aren’t we living the good life, Betty dear? Are you not happy?”

Such moving tenderness was too much for Betty. She could no longer remain indifferent.

“But of course we do, my dear. Ours is a very good life and you are very kind man,” she would continue in her mind, but very carefully, lest he should hear her thoughts.

“I haven’t had a chance to know anyone else. It’s rather depressing to reach old age and realize you’ve been sleeping with the same man all your life. Having shared a desk in high school, we let our romance blossom in college and ended up getting married just before we graduated. What a beautiful woman I used to be! And now look at these bony wizened hands. What a dreadful trick life plays on us!”

These were the kind of thoughts crossing Betty’s mind as she was riding the F train into Manhattan. The air was quite stuffy in the car, so she unwrapped her scarf and let her hood down. As for the fur hat, she decided she might as well keep it on. Why let people see the discolored, thinned-out, anemic remnants of her former luscious blond hair? No doubt she had been a coquettish woman. She gave a sigh and put her cheek next to the cold glass of the window, studying the faces around her. Riding the Queens train is quite an experience. In each car there must be at least ten nationalities. Most of the passengers were wearing drab, grayish clothes. They had long faces, marked by fatigue. Some of them napped, with their heads bobbing up and down, trying to hold onto to a book or a newspaper printed in some outlandish language. Overhead were all sorts of advertisements—most of them in Spanish—offering lawyerly assistance for accidents or medical injuries. In the end Betty fell prey to the same winter afternoon drowsiness. She dozed off. It was just a few minutes, yet they felt like an eternity.

When she opened her eyes, she was perspiring slightly. Her face was flushed and a thin rivulet of saliva had coursed down her chin. True, she had only slept a few minutes, but voluptuously. The air in the car was getting hot. Across from her sat a tall, heavy-set man, whose face looked Russian. He had a vacant scowl. No doubt, he must have come aboard while she was sleeping. And, then she froze. Quickly she reached for her head and felt a lump in her throat. The hat was gone! She looked around, felt for it on the floor, but it was all in vain. The hat was nowhere to be found. And, then she saw it. The man sitting on the bench across from her was wearing her own Russian hat. He must have snatched it while she was napping. A fresh wave of perspiration inundated her—this time caused by vexation and fear. She stared fixedly at the passenger. He was a hulk of a man. Should she ask him for her hat back? Could she afford to cause a scandal right there in the train? What if the man responded violently? Naturally, he had not pilfered it from her only to hand it back to her in the presence of witnesses! Bob would go crazy when she would tell him the whole thing. Of all things, it had to be the Russian hat he treasured so much that was stolen! It was so warm, so comfortable! He had been wearing it for ten years, but another ten years would not make it look a day older.

The train was pulling into the station. The man was dozing along with the other passengers, the hat sitting proudly on top of his head. Betty screwed up her eyes, tensed her body, the way she used to in her youth when she competed in the long jump. Then she chose her time very carefully. At the last moment, before the automatic doors closed, she pounced like a feline. She snatched the hat from the man’s head and dashed out just as the doors of the car closed off behind her, leaving the man agape and numb with surprise. She ran as fast as she could, deciding to abandon her visit to her cousin in the hospital. Instead, she walked across the platform and boarded the train in the opposite direction, for home. Seeing her return so early, Bob suspected something was amiss and, naturally, panicked. Betty dropped down in an armchair, drained of all energy, clutching to her bosom the recovered Russian fur hat.

“You won’t believe what just happened to me. I bet you would have died of fright, if this had happened to you. Just like in the movies.”

“When I say you are naïve; that life is a dangerous thing, not to be trifled with; you merely laugh at me.” mumbled Bob in a voice choked with emotion, trembling at the foot of the armchair from which Betty was ready to roll out all the details of this “made-for-the movies” story.

“A huge, sinister-looking man—boy, you ought to have seen him! A mountain of a man, with a glassy glint in his eyes, sat down right in from of me. And, can you believe it?” said Betty, letting suspense build up. Bob was almost in tears, at the thought of what was to follow.

“Now wait. Wait just a minute,” he implored. “Take your coat off first. And, your boots, too. Breathe deeply. Shall I fetch you a glass of water? Oh no, I think I’m going to pass out.”

As Betty took off her coat, out of the hood came the Russian fur hat, falling onto the floor. Bob picked it up, showing it to her triumphantly:

“See what a good idea it was to insist you take the hooded overcoat? There! If it hadn’t been for this hood, you’d have certainly lost the hat.”

“What’re you talking about?” snapped Betty. “Where did you get that hat?” she asked him, while continuing to clutch against her bosom an identical Russian hat, only perhaps a little larger.

“It must have dropped into the hood, while you were asleep,” said Bob, smiling smugly at the thought of what he had managed to prevent by insisting she take the hooded overcoat. Betty looked at him in horror. For several weeks, the local Queens paper carried an ad about the Russian fur hat that had been stolen off a man’s head in the F express train. No one ever called to claim it.

Translated from Romanian by Doru Motz

Carmen Firan, born in Romania, is a poet, a fiction and play writer, and a journalist. She has published fifteen books of poetry, novels, essays and short stories. Her writings appear in translation in many literary magazines and in various anthologies in France, Israel, Sweden, Germany, Ireland, Poland, Canada, U K, and the USA. She lives in New Zork. Her recent books and publications in the United States of America include: The Second Life (Columbia University Press) 2005, The Farce, (Spuyten Duyvil) 2004, In The Most Beautiful Life, Umbrage Editions 2003, The First Moment After Death, Writers Club Press, 2001, Accomplished Error, Spuyten Duyvil, 2000.

Sara and her husband/director/collaborator Reid Farrington are passionate theater makers, parents, advocates, and friends. Their husband and wife run company, Foxy Films, is making BrandoCapote, which has been workshopped at Art House for the past nine months and will premiere at The Tank in November.

This year, I kicked off the fall performance season in the basement of Hart Bar at Dance in Bushwick’s one-year celebration. Dance in Bushwick (DiB), founded by Joanna Futral, aims to provide a platform for dance and performance artists living or working in the neighborhood. Futral works closely with her husband, Casey Kreher, who serves as technical director.

Little Sister brushed the teapot with her fingertips. It had been a mistake to brew the leaves early. Father—which was what they all called her husband—didn’t believe in reheating so the entire preparation would have to be discarded if the physician didn’t arrive within the next five to ten minutes. She adjusted the sandwiches on the tray. Chicken, cucumber, liver.