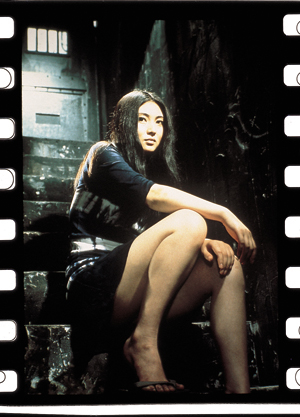 One of the more thrilling film experiences I had in the last ten years took place in my small apartment in Taiwan sometime during 1997. Flipping the channels, I came across a Japanese film right at the beginning, just as the Toei studio mark of waves crashing on rocks appeared. However, the sound of waves was replaced by a screeching tone. This segued to a sequence which puts you on a subway train gazing at a slight, attractive, yet hard-faced young woman with long black hair. Two men in suits make a surreptitious attempt to apprehend her. Without missing a beat she slashes one of them across the face with a knife and flees. Just as she’s getting off the train, the other man handcuffs her to himself as the subway doors close—she’s on the platform while he remains on the train. With three slashes of her knife she severs his arm and swings it in the air furiously, then freeze frame: music plays and the credits roll. The maniacal, surreal tone rendered by this outlandish violent act is underlined by the subsequent montage when we see her running through the streets of Tokyo with the severed arm swinging by her side. The arm almost becomes a dreamlike abstraction—is it indeed a disembodied limb or is it a boneless ham fresh from the market? We have thus been ushered into a realm of hyperbole and rage.

The film turned out to be Female Prisoner Scorpion: Beast Stable, the third in a woman in prison series from the early seventies starring the inimitable and charismatic Kaji Meiko*. The transcendently over-the-top series was a watershed of Toei’s pinky violence genre.

With film audiences encroached upon by television, the major film studios found themselves in economic crisis during the late ‘60s and early ‘70s. The surest way to attract an audience proved to be ‘pinku eiga’ or sex films. In 1971 Nikatsu, a studio known for its excellent action films, enlisted their stable of veteran directors and began to produce exclusively what they dubbed ‘roman porno’ (romance porn)—well made, more commercially accessible soft-core sex films, later often injected with violence. Curiously, Kaji had been groomed as an action star at Nikatsu, starring in the pre-roman porno Stray Cat Rock series of ‘sukeban’ (lit. girl boss, a term for female juvenile delinquents) films. She made the switch to Toei to avoid starring in sex films. Toei, meanwhile, proceeded to increase the voltage of sex and violence in their action films, thus resulting in what became known as pinky violence. There were female yakuza (gangster) films, sukeban films and of course the breakthrough Sasori (scorpion) series of woman in prison films, all of which featured tough, kick ass women, gratuitous nudity and brutal action. The stereotypical subservient Japanese women were replaced by brash, take-charge gals who demanded the freedom to do as they chose. Considering the various prerequisite genre tropes such as catfights, swordfights, torment, torture, shower scenes, et al. these films were not without passages of degradation for the heroines. However this only seemed to prove that the quickest path to female empowerment is paved with misogyny and bloodshed.

But what makes this chapter of exploitation films truly provocative is how economics forced the studios to push the envelope further and further, allowing the filmmakers to infuse their work with subversive elements. The anarchic nature of Toei’s pinky violence films in particular allowed for thinly masked social critiques while espousing anti-authoritarian sentiments. These were often youth films with antiheroic protagonists living outside the laws of an outdated and all but useless establishment—akin to Roger Corman biker films and other American International genre pics, such as Wild in the Streets, only much more over the top. The last five years have seen a slew of these films get exposure in the U.S. on DVD. 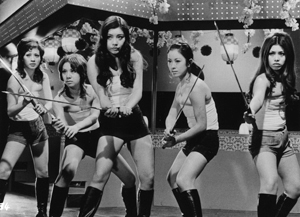 The first two films in the Sasori series stand out with their unrelenting pacing and eye-catching, comic book styled theatrics which recall the film’s manga origins. Kaji plays the title role stoic and taciturn. Kaji was opposed to the foul mouth of the character in the original manga so her dialogue was cut to a minimum, thus affecting an inspiring, influential permeance of cool cut from the same cloth as Alain Delon’s assassin in Le Samourai. Back in 2000 New Yorkers had a chance to see Jailhouse 41, the second entry and the cinematic pinnacle of the Sasori series, on the big screen thanks to American Cinematheque programmer and “Outlaw Masters of Japanese Film” author Chris D. Director Ito Shunya, who directed the first three of the four films in the series, and pulled out all stops: Expressionistic mise en scene combined with a gothic tone explodes onto a phantasmagorical wasteland when Matsu (Kaji Meiko) and other convicts manage to escape the jailhouse. Visceral set pieces in all the Sasori films at once comment on and enable a voyeuristic male gaze. This allows the heroine’s suffering to conclude in triumphant vindication when she wreaks vengeance on those who have wronged her—a device most key to pinky violence. A prime example in Jailhouse has two of the warden’s sniveling lackeys brandishing an overtly phallic fire hose and hosing down a tied up Matsu. Soon after this she nearly takes out the warden’s eye, inciting a riot. Primordial use of natural settings and color allow for chilling metaphors as when a convict’s violated corpse is tossed into a waterfall by her victimizers only to have the entire waterfall turn blood red. Unfortunately, Image Entertainment’s disc of Jailhouse is out of print, but Reel Life or other good, obsessive video stores should have it. Female Prisoner # 701 from Tokyo Shock, which is easy to find, is a nice looking, reasonably priced package complete with Chris D. liner notes. Tokyo Shock will release the last two installments in the series, Beast Stable and Grudge Song later this year.

After the first couple Sasori films, Kaji starred in these seminal female samurai revenge films for Toho studios, though they were reminiscent of pinky violent Toei. It became the template for Tarantino’s cinematic mix tape Kill Bill. These period films based on a manga written by “Lone Wolf and Cub” author Koike Kazuo concern a woman raised to avenge the murder of her father and rape of her mother who died giving birth in prison. The story is filmed with a stunning structural and visual flair showcasing Kaji in another dynamic personification of female wrath. Add to this an intriguing background that pits samurai codes of honor in the face of Fin de siècle political upheaval. Both films are available separately and as a box set from Animeigo.

Panik House didn’t start the pinky violence DVD revolution but they reignited it with a barrage of great new releases. Their luscious, obsessive box set comes in a hot pink plastic gatefold featuring four films: Delinquent Girl Boss: Worthless to Confess; Girl Boss Guerilla; Terrifying Girls’ High School: Lynch Law Classroom; Criminal Woman: Killing Melody. Each of these is an entry in a separate series and together run the gamut from more tongue in cheek and self referential to downright vicious and ultraviolent. Terrifying Girls School attempts transcendence through transgression in classic brazen Toei fashion. It succeeds with its violent and angry critique of a corrupt authoritarian social structure that allows for ‘ijime’—ritualized hazing and peer abuse with sometimes fatal consequences. The truly horrifying opening involves schoolgirls in uniform tormenting a hapless classmate with a vacuum operated blood pump eventually forcing her to jump off the roof. All four of the films are well paced, action packed pop culture souvenirs. Delinquent Girl Boss is the most charming, the sukeban melodrama is peppered with comic relief. Cute and happy-go-lucky Oshida Reiko (International Teen Princess of 1966!) is a refreshing counter to the usual stoic bad girl well represented in this box by Toei stalwarts Sugimoto Miki and Ike Reiko. Nevertheless, Delinquent Girl Boss concludes with a bloody, psychedelically flourished tour de force showdown between seedy yakuza and our sexy sword brandishing, hot pants wearing sukeban heroines. The box includes a beautifully illustrated booklet with Chris D. liner notes plus a CD of loungy soundtrack tunes sung by Ike Reiko with lots of moaning that was probably intended as sexy but sounds more like cats in heat.

Sex and Fury and its follow up Female Yakuza Tale were very racy updates of Toei’s successful Red Peony Gambler starring the iconic Fuji Junko that came a few years earlier. These were ninkyo-eiga (chivalry films): period piece yakuza films that portrayed gangsters as having a heroic sense of honor. The ante is upped with an emphasis on the more exploitative elements and Toei sukeban sexpot Ike Reiko in the Fuji role. While Sex & Fury is almost as spellbindingly stylish as the Lady Snowblood films, its power to truly impress is diluted by cheap offenses such as degrading scenes of writhing sex and torture. On the other hand, it is precisely this sort of lawless abandon that give these films an excitingly surreal quality.

The third entry in this five film series from Nikatsu features camera domineering Kaji Meiko in a slightly more garrulous and snarky role as leader of The Alleycats gang. This film came right on the cusp of the pink and violent phenomenon and was a precursor to more wild and extreme movies soon to come. The tedious, throwaway story of gang rivalry is compensated by a menagerie of oddballs, very mod a-go-go production values and a bevy of biker babes. It’s certainly not the cream of the crop but groovy fun nonetheless. It would be great to have some of the other Stray Cat films hit the U.S.

This nasty, gritty and taut action flick has the sultry, stern faced Sugimoto Miki as an undercover cop taking a strong nod from Kaji Meiko’s Sasori characterization. The film bears parallels with Italian polizia thrillers of the era, Umberto Lenzi’s dark Almost Human in particular. However the degradation is prolonged to an irredeemable level that leaves a truly sick taste in one’s mouth.

This remarkably stylish foray into ‘nunsploitation’ exhibits a strong Italian genre influence, Dario Argento in particular. Norifumi Suzuki, the prolific and outlandish auteur behind Sex & Fury and Lynch Law Classroom as well as entries in the Red Peony and Sukeban series offered the most dazzling indictment of Christian hypocrisy this side of Ken Russel’s The Devils. Ludicrous sexual antics (lesbian trysts, self-flagellation, rose thorns tied across the heroine’s chest) are presented with such an inspired and artistic fervor that they take on a horrific yet evocative otherworldly quality.


*The surname comes first in Japan so her first name is actually Meiko while her last name is Kaji. All Japaneses names in this article are written in this manner.