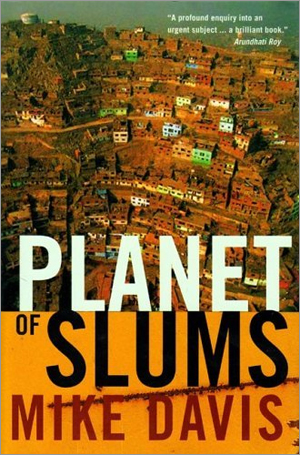 Ever reached a state of panic during a futile search for a public bathroom in New York? Residents of places like Kinshasa and Delhi feel your pain, and then some. In Kinshasa, a city of 10 million with no sewage system, slum residents make “flying toilets” by throwing shit-filled plastic bags onto the top of the nearest roof—a less than ideal arrangement, since many must also sleep on the nearest roof. And in 1998, three people in Delhi were shot by police for defecating in public places, an unhappy reality for many in the city’s thousand-plus slum settlements, where half a million families share access to 160 semi-functional toilets.

Funneled by the converging forces of global politics and economics into unstable, illegal or makeshift slum housing, millions lack access to any working toilet facilities. Plus ça change, says urban theorist Mike Davis in Planet of Slums, at least when it comes to sewage. Sanitation conditions in modern slums can be described in the same words used by Friedrich Engels in his 1844 study of English cities during the industrial revolution. Davis comments that “there is nothing in the catalogue of Victorian misery, as narrated by Dickens, Zola or Gorky, that doesn’t exist somewhere in a Third World city today.” Nearly two hundred years later, he points to the now-worldwide sanitation crisis (what he calls “the right to shit”) as a marker not only of dire material poverty but also of the existential divide between the realities of rich and poor people. Not to worry, though, Davis reports sardonically—Washington-sponsored neoliberalism has hit upon a solution: pay toilets in slums as revenue sources for cash-strapped third-world governments needing to make interest payments on IMF loans. This pay-to-dump scheme is both the acme of free-market theology and a perfect manifestation of that existential divide.

So is this 1844 all over again? One might wish it were after finishing Davis’s latest book. Despite the physical continuities, he finds little similarity in proportion or causal factors between the earlier wave of urbanization and today’s onslaught. One-third of the world’s urban population, or one billion people, lives in slum conditions (characterized by the United Nations as overcrowding, substandard or informal housing, and lack of access to safe water or sanitation). This time around, urban migration is happening largely in cities and nations whose economies are actually shrinking. It’s driven in varying combinations by the mechanization of agriculture, economic upheavals following trade liberalization, civil wars and concentration of land ownership—in short, by the spread of poverty.

Perhaps most stunning is the speed and scale of the current transformation. Davis has a mountain of numbers to prove that urbanization is increasing rapidly, and almost completely within the poorest parts of the poorest cities of the world’s poor countries. Experts predict a global population peak of 10 billion around 2050, he writes; 95% of the growth between now and then is projected to happen in urban areas of third-word cities. In 1950, there were 86 cities with one million or more residents. Today there are 400, and by 2015 there will be at least 550. The worldwide slum population is growing by 25 million per year.

Davis compares conditions and causalities in some thirty-odd cities including Mexico City, São Paulo, Bombay, Delhi, Jakarta, Cairo, Calcutta, Manila, Lagos, Shanghai, Lima, Buenos Aires, Istanbul, Beijing and Bogotá. He establishes the force and trajectory of the world’s urbanization irrefutably—and quite dramatically. Planet of Slums depends for coherence on Davis’ careful management and juxtaposition of data from scores of sources. Flying toilets aside, the numbers are the story. Yet readers may end up combing the footnotes, wishing for more detailed historical narratives within the dizzying pastiche of urban failure.

Insisting that “the slum was not the inevitable urban future,” Davis uses case studies to demonstrate the topography and environmental conditions common to slums across the world, and to analyze the influence of politics, planning and the economy in contributing to the slum explosion. He traces an arc from the post-war days of the Cold War through the anti-colonial revolutions of the ’50s, ’60s and ’70s to the present, in which the dogma of free trade is relentlessly promoted despite a worsening wealth gap between rich and poor countries. In this analysis the Cold War generated some positive hope in the Third World. As “ideological warfare between the two great Cold War blocs generated competing visions of abolishing world poverty,” the Soviet Union tried to industrialize poor countries while the U.S. sought to inoculate the urban poor of the third world from communist radicalization by sponsoring land and housing reform.

Davis concedes that many third-world governments failed or abdicated their reform efforts, but he sees debt to first world-dominated lending institutions like the IMF and World Bank as the “death knell” for their social visions. He compares the international financial institutions and their NGO partners to a type of colonial administration. They dictate the domestic spending of debtor countries and directly finance, plan and implement housing and development initiatives, pushing aside elected local and national governments, thereby severing slum dwellers from any representative voice in their own housing decisions. This sector has neatly absorbed the formerly independent left-ish NGO sector and now occupies the field of possibility for relief from severe poverty, bypassing individuals and governments alike in a sweeping extra-national disenfranchisement. Today’s slums, in Davis’ view, are “warehouses” for the surplus humanity of the third world, where subsistence pressures generate increased competition among the poor for scarce jobs and resources.

And what plans have these post-colonial administrators made for remedying global poverty, besides collecting fee for service revenues on the supply and demand of excrement? Planners from international organizations like the UN appear largely to have given up, accepting the slums as a permanent feature of modernity. The UN acknowledged in its 2004 Human Development Report that at current rates of progress, its Millennium Development Goals for sub-Saharan African countries would not be met for at least another hundred years. Instead of macro-strategies for alleviating poverty, neo-liberal economists like Hernando de Soto gaze into the slums and see millions of “micro-entrepreneurs” whose only barrier to membership in the formal world economy is the lack of formalized systems of property ownership. Yet what’s really needed are macro strategies to deal with debt, poverty, and widespread crises in housing, employment, nutrition and health.

Davis’ range is impressive, but his attempt to span the globe often makes his analysis quite thin. His integration of ethnographic or reported accounts of slum cultures--is less successful than his statistical and political analysis. The exploration of slum culture is limited to references to “charismatic churches, prophetic cults, ethnic militias, street gangs, and revolutionary social movements,” and “myriad acts of resistance.” Davis writes that he’s already at work on a new book about power and governance in slum communities, so stay tuned for a closer look at the social organization of these warehouses of humanity.

One of his most interesting insights comes neglected in the epilogue. Having scornfully dispensed with the prescriptions of blithe free-market neolibs, Davis takes care to note that not all sectors of first-world elite are ignorant of the implications of a desperate and growing “planet of slums.” Military planners at the RAND Corporation observed in the early ’90s (remember Mogadishu?) that the future of conflict lies in urbanized insurgency. They imagine future combatants as a laundry list of the disgruntled, remarkably similar to those Davis observes in his comparative studies: “anarchists, criminals, lunatics, revolutionaries, criminal syndicates and the dispossessed.” Unfortunately, unlike even the most dogmatic free marketeers at the IMF, military planners are not charged with applying this insight to civil urban reform efforts, and they simply adjust military strategy to conform to a future of endless low-level conflict with as-yet unidentified urban insurgents.

Some critics of the “war on terror” draw a causal link between increasing U.S. economic and military domination and the flowering of reactionary, radical anti-American movements. Davis merely notes that for millions if not billions of people, survival literally depends on some form of solidarity in “refusing to accept their terminal marginality within global capitalism.” This refusal, he elaborates, “may take atavistic as well as avant-garde forms,” a helpful reminder that backlashes against modernity arise as a practical, even logical consequence of poor people’s experience of modernity. They may or may not be preoccupied with a critique of U.S. policy, but they will almost certainly be preoccupied with a wish not to have to shit in public every day.

Nora Connor is a writer based in Brooklyn.

For nearly 40 years, New Orleans photographers Keith Calhoun (b. 1955) and Chandra McCormick (b. 1957) have been documenting the Louisiana State Penitentiary, known as “Angola,” and the lives of the men incarcerated there with unstinting dedication and unflinching honesty.

Nationalism, Borders, and the State

While the “Abolish ICE” slogan is no doubt well-intentioned, it ought to raise a more fundamental question about the very existence of borders and their relation to the state.