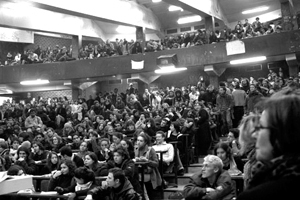 The showdown in Paris and other cities against the right-wing government’s First Employment Contract bill (“CPE”) turns out to be France’s largest student movement in twelve years — but joining forces with last November’s suburban rioters remains a harder task.

“No, not them again!” The youth burning cars and building barricades to fight the riot police in the streets of major cities is the image of France that foreign columnists and French business managers alike don’t want to see ever again. But it’s the image of France which every social or generational group targeted by conservative reforms succeeds at reviving over and over, against all odds. The French difference within an overly tractable Western labor force is not phrased the same way depending on which side you are of the infamous “CPE,” that First Employment Contract bill project which triggered the long standoff between prime minister and would-be presidential candidate Dominique de Villepin (who feels he needs to show his tough side) and the vast majority of the country’s 8 million high school and college students. Is France a 19th-century industrial wasteland utterly unable to cope with globalization and today’s economic “realities,” as stated by conservative columnists and jeering foreigners? Or thanks to its still more protective labor system which the French will fight to preserve, is it the vanguard of a new global struggle against free market policies and professional precariousness?

Of course real life is elsewhere, located neither in Hayek’s free market paradise where private employers are like labor angels, nor in Keynes’ garden of State regulation Eden which, in today’s real-life labor market, even in France, may well be paradise lost—especially when compared with a time when a nation’s liberal economic policies held sway over larger economic matters. But the fight indeed is worth it as far as it stands against the same old “fatalism,” economic “naturalism,” and withdrawal of political will in favor of letting the invisible hand do the job—or however you call the unanimous government argument that free market forces and today’s global realities don’t give “us” any choice. “There is no alternative” is the technocrats’ anthem on the banks of the Seine, the Thames, or the Potomac: it’s what this French standoff wishes to be an alternative to. 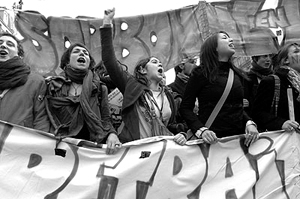 In fact, “real life,” this time, consists in two very concrete tasks taken on by the large “anti-CPE” crowd: one is the work of critically deconstructing point-by-point an unfair but technically written bill, the other is the action of occupying collectively higher education and workplaces long enough to pressure the government into withdrawing that text. Necessary tasks indeed, judging from the real and present dangers of a reactionary bill (a step backward in French labor law insofar as it allows for the first time employers to proceed with unmotivated layoffs at any time during their young employees’ first two years of contract), and from the organizational talent displayed by a spontaneous youth movement proud of its relative independence from the political parties and trade unions courting them. The good old street fight between the military-like French riot police and students wearing scarves and shattering the pavement is naturally reminiscent of the mythical images of May 1968—and in that respect, a good piece of news in a brutally conservative world order banning any form of social dissent in the name of a more invisible enemy.

But such street politics nevertheless doesn’t speak the language of class warfare and proletarian revolution; it speaks the more humble lexicon of critical legal work plus organizational issues. Which entails many down-to-earth problems of an invaluable importance: how to occupy a university chancellor’s office despite strong police protection; how to preserve direct democracy in a campus on strike between those who want to resume classes and those who want to maintain the struggle; how to mobilize one city’s high schools one morning to get their students to join the demonstration the same afternoon; how to communicate with the foreign press and the larger French population and let them know how vital that struggle is (as opposed to it being seen as one more defense of national privileges, as sneered by right-wingers everywhere); and most importantly, how to go beyond the single struggle against the “CPE”—that is, how to use it, or arm it, against the larger social backlash at work in the entire First World. 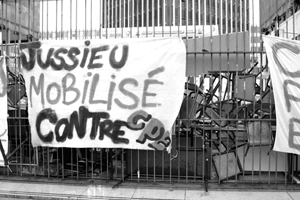 That last issue is the key to all others. This time there have been three ways of widening the angle, increasing the size of the picture: first, linking the new form of labor precariousness implemented by the CPE with other recent steps backward such as the 2003-2004 changes in the cultural workers’ system (les “intermittents”) and in the public scholars’ status, which is what many activists try and do by reviving those recent struggles and morphing them into the CPE’s; second, building an organizational base or some sort of larger social movement likely to survive the end of this standoff, which is made harder among other things by the students’ understandable wariness of anything too institutional; and third, connecting the students’ movement with last fall’s suburban riots and their still invisible actors (see Cusset, “Bonfire of the French Vanities,” Rail, Dec.’05/ Jan. ’06), not in the old Marxist tradition of associating an intellectual vanguard with a proletarian herd (because students now come from every corner of society, and kids from the “banlieues” may even be among them), but as two forms of struggle obviously sharing common grounds and enemies. And this is where this spring’s movement has failed by and large, despite many efforts to forge such a crucial connection. 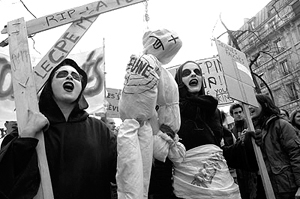 The current movement has failed because the kids who stood up last November against the “République” are still mostly unorganized and invisible, and most often interested less in those large mainstream demonstrations as a political action against a conservative government—and more as great opportunities for looting shops and robbing isolated students (images of a handful of demonstrators brutally kicking one of them on the ground just to steal his/her mobile phone has harmed the movement more than anything else). And it has failed because the ethnicized and essentialist look at last fall’s riots as a “war of civilization” or at least a lack of “integration” has prevailed until now, to the point where it now keeps apart a generational fight (the students’ movement) and an ethno-geographical problem (the “banlieues” over there). In fact, both have to do with the same age group turning this very category (the “youth”) that is fabricated by politicians and advertisers into an effective arm against today’s conservative elites.

And in this respect, both struggles deserve to be more in tune with each other than they have been throughout the impressive, combative, new French student movement of March and April, 2006. They should be connected too with labor strikes in Germany, anti-war movements in the US, Eastern Europe’s democratic resistance, and minority causes here and there. Otherwise, the current conflict may be seen as one more interest group from one midsize nation fighting for its own sake and ultimately against the other competing, selfish victims of global capitalism. The old song of “el pueblo unido…” could be heard among many others on the streets of Paris, Marseille and Rennes, sometimes along with its alternative version (“el pueblo armado...”), but this time it didn’t mean the old center-left fantasy of a well-organized united labor movement—it meant joining all the various forces to wage the day-to-day worldwide social war with some chance of survival.

In the spring of 1945, the French government opens up three warehouses filled with pianos that have been stolen by the Germans, the vast majority from Jewish families, and invites the public to reclaim their instruments.