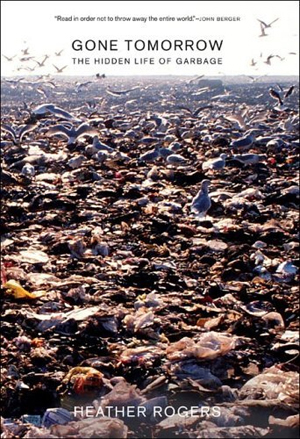 After you finish reading this paper a few things could happen – you’ll throw it away, recycle it, or maybe just let it sit on your coffee table for a few weeks. Regardless, at some point it will begin a journey that is unknown to most people.

In her meticulously researched book, Gone Tomorrow: The Hidden Life of Garbage, journalist Heather Rogers details what happens to the 500 billion tons of waste, rubbish, trash, and garbage that the United States discards each year. As the title hints, our waste habits are an out of sight, out of mind problem. Why should Americans be concerned with what happens to our garbage when there doesn’t seem to be a problem?

“Garbage is this substance through which we can make connections between larger environmental crises and our daily lives, something that is often hard to do because those larger crises are really abstract,” Rogers said in a recent interview.

In tracing the path of garbage from wastebasket to landfill, the reader is provided a crash course in economics – garbage disposal is nearly a $50 billion industry each year in the United States. At the heart of Rogers’ analysis is the reality of how profit competes with environmental concerns. In this case form follows profit: the less garbage that’s thrown away, the less money makes its way into waste haulers’ pockets.

Rogers’ journey begins at one of the dozens of mega-landfills that dot our landscape today, but remain hidden from sight. “If people saw what happened to their waste, lived with the stench, witnessed the scale of destruction, they might start asking questions,” speculates Rogers. As she describes the scene in gruesome detail, the apocalyptic nature of these sites becomes evident, “The stench is unbearable: fetid, greasy, cloying, it penetrates one’s clothes and skin, lingering persistently in the nose and mouth. Garbage workers say they can never fully wash away the smell.”

Describing her visit to a single 6,000-acre mega-fill outside Philadelphia, Rogers reports that “Workers dump, pack and fill the earth with almost 40 million pounds of municipal wastes daily.” The slew of statistics Rogers provides surrounding these mega-landfills at times become difficult to comprehend. “Morrisville landfills leach on average 100,000 gallons daily.” In addition to horrifying the reader by quantifying our excesses, the figures baffle a bit as well. It becomes hard to visualize how much these figures mean: what does 40 million tons look like compared to 4 million?

The description of these sites may be troubling as a record of our excess, but that alone doesn’t constitute a looming environmental crisis. Liners designed to keep the toxic brew of chemicals from leaking into groundwater will break down during the next 50 years, the EPA now admits. That’s why Rogers calls these sites “environmental time bombs.” Her economic analysis is present here as well, as she points out that consumers fail to connect the cost of waste disposal to the cost of new products, though the two are directly related.

After detailing the effects of our consumption-based lifestyles, Rogers looks to the past for precedents, explaining how metropolitan areas dealt with waste problems in the mid-19th century. In New York City, for example, the metropolitan area functioned as an “expanded recycling” area. Rogers writes, “By 1880, Manhattan had more than 150,000 horses trotting through its streets; the consumption of hay was therefore enormous, rivaled only by the unstoppable output of horse droppings.” The outlying areas of the city supplied the necessary food for humans and animals, while both human and animal feces provided the fertilizer necessary to nourish the soil that was used again each growing season. “Swine were a common feature of early industrial towns; workers still accustomed to raising there own food kept pigs that wandered freely, feeding off the piles of refuse tossed unto neighborhood lanes.” This “expanded recycling” area wasn’t perfect, and city officials and the well-to–do were terrified that these roaming hogs, eating and shitting everywhere, would cause an outbreak of cholera. Crackdowns on roaming hogs began as early as 1821, but “it took several more years of repression before a truly pig-free zone was established in Manhattanâ¦the working classes persisted in keeping their edible beasts into the 1860s.”

The need to keep livestock underscores how the nation, even in Manhattan, was still very poor. Almost nothing besides food slop was thrown away; necessities such as soap and clothing were still produced in households, with wealthy families employing servants to do so. Consequently the ubiquitous packaging that pervades our lives today was virtually nonexistent at that time. Rogers’ focus on urban garbage history is a bit of a detour, but she shows that solutions to creating significantly less waste do exist. Our economy and lifestyles have changed tremendously, but the fundamentals of reducing waste are still applicable.

Rogers later focuses on the post-World War II decades, when American society as a whole underwent its greatest transformation and garbage itself mirrored this rapid change. The postwar decades ushered in an era of wealth and consumption unknown to previous generations of Americans. Rogers succinctly poses the dilemma faced by manufacturers by the end of the 1950s. “Many U.S. families had already acquired an automobile and suburban home with all the gear they could possibly needâ¦ the real trick was to keep people buying.” Initial attempts to get the public to buy more failed. Calls for “two washers and two dryers in each abode” didn’t work because, why buy a product when you already have a perfectly functioning, long-lasting one?

Enter built-in obsolescence. This process wasn’t accepted readily by the public. As Rogers writes, “it was often referred to as forced consumption.” Massive public relations campaigns attempted to persuade post-WWII Americans to transform themselves from a public used to conserving for the war effort (and which was also just a few decades removed from the market-induced thriftiness of the Great Depression), into a public that accepted waste. Quite a feat. These tactics may seem commonplace today, but huge increases in advertising combined with the new medium of television, made the 1950s American ready to consume like never before, and the genius of the emerging PR industry eventually won over the public. Rogers maintains, “Vigorously deployed in the postwar era, marketing based on desire, anxiety and envy was highly effective.” It’s tempting to want Rogers to explore the advertisers’ tactics more, in order to fully understand how this transformation into a massively consuming public occurred, but the focus on trash doesn’t allow for that tangent.

The advertising boom and the burgeoning field of PR would now be poised to battle manufacturers next great threat— the environmental movement of the early ’70s. With slogans such as “first, reduce consumption, then reuse goods in their already manufactured form as long as possible, and then, only as a last resort recycle,” environmental or green groups threatened to provide an alternative to normal consumption habits. Bottle deposit laws, scores of legislation protecting the environment (which came under Nixon), and increased awareness of wasteful lifestyles, all had manufacturers under siege. Industry fought back. Roger state that,“The packaging industry funded a lavishly funded nonprofit called Keep America Beautiful (KAB), the first of many great greenwashing corporate fronts to come.”

Soon litter was the concern, rather than toxic manufacturing processes that polluted the air and water. KAB embarked on a massive anti-litter campaign that served to diminish “industry’s role in despoiling the earth, leaving it entirely out of its liturgy, while relentlessly hammering home the message of each person’s responsibility for the destruction of nature, one wrapper at a time.” This shift in public perception regarding where environmental problems stem from was a brilliant move by manufacturers. Individuals were now focused on how to dispose of excess packaging instead of eliminating excess packaging in the first place. As part of this campaign against litter KAB brought us an iconic figure of the 70s: Iron Eyes Cody, the Native American who shed a single tear and warned, “People start pollution, people can stop it.”

The last two chapters of the book are a dizzying look at recycling, the mainstream environmental movement and concepts such as green capitalism. Rogers views today’s waste problems through the demands of those early ’70s environmentalists, and focuses on stemming waste at the point of production. Regardless of whether you agree with all of her conclusions about the various environmentalist strategies, you’ll certainly be challenged by Rogers’ many insights. And after finishing the book, you’re bound to get a little cranky next time you throw away needless plastic packaging or see a huge pile of unread newspapers staring at you from the street corner.

Aaron Sarver is Associate Publisher of In These Times magazine.

While his art history scholarship has earned David Driskell international acclaim, his paintings and works on paper have yet to receive that level of recognition. Resonance: Paintings, 1965-2002 makes a good case that they should.