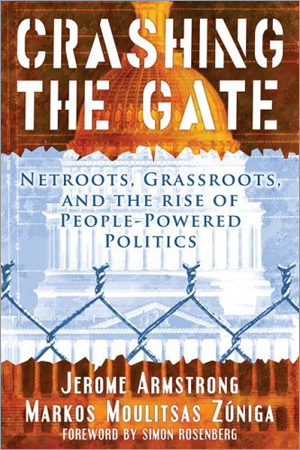 With over 500,000 visits a day, DailyKos is not just (in one ranking) the second most popular blog on the net. It’s also one of the main sites where the Democratic faithful are rallying, where they get the latest updates from the front lines, where they hash out their vision of what the party should be, their plans for victory. If there’s a progressive resurgence, this is its epicenter.

Now it has a manual. Many Kos readers are hoping Crashing the Gate is the bible that will finally lead progressives out of the wilderness. Written by none other than Kos himself (properly Markos Moulitsas Zuniga) along with MyDD.com (another liberal blog, where Kos got his start) founder Jerome Armstrong, Crashing the Gate is a damning indictment of the Democratic Party. While their stabs at history are perfunctory at best, the book is at its most compelling when railing against the self-satisfaction and complacency of the Dems: the party’s heavy-handed efforts to exert control over local races, the “old boy asshole network” (in the words of one source) that skims millions in commissions off soporific campaign ads, the myopic calls of the often feuding interest groups that vet candidates. On this last count, a few pages on NARAL’s handling of a Rhode Island Senate race in which they hobbled Democratic opposition and endorsed the ostensibly pro-choice Republican incumbent (Lincoln Chafee, who then voted to confirm anti-choice judge Janice Rodgers Brown to the federal bench) are particularly convincing. Backed into a corner, the Dems only squabble more fiercely with each other.

Kos has repeatedly called for progressives to approach the party as a “big tent,” with room for positions that deviate from the ostensible party line on abortion, gun control, the death penalty, the environment—or the legion of “social” issues that the pundits argue have made it a pariah in many states. “We need a party that can win on the strength of its ideas and convictions,” the authors write early on. Whether it’s because they assume there’s agreement about those ideas and convictions, or (more likely) a result of their focus on tactics (which Kos has been accused of overemphasizing), they don’t have much to say about what those ideas should be. They’re more interested in prying open space for new voices, whether online or in the party. The exact size of this tent has yet to be determined.

Kos isn’t waiting to start inviting people inside. A former soldier himself, Kos, in collaboration with Air America, has used his blog as a platform to spotlight the candidacies of more than a dozen vets running for congressional office, dubbed the “Fighting Dems.” The name itself is seductive, as it promises the spine that the hypothetical party of opposition is all too often lacking. No charges of being soft on security for these Democrats, no sir. No accusations of failing to support the troops. No claims that they ignore the “successes” of the occupation. They’ve been there, done that. Now they’re back to kick Republican ass and take names. All of us in the trenches on the home front can relax: reinforcements have arrived. They’ve even formed a PAC: the Band of Brothers.

If this logic seems suspect after the Swift Boats torpedoed Kerry’s campaign, it should. Max Cleland’s brutal 2002 defeat in Georgia (Diebold machines aside) should’ve made clear that being a veteran isn’t enough to inoculate the Dems from the ruthlessness of the Republican guard. Even if one grants that the decision to invest needed funds and resources in veterans simply because of their military service makes sense tactically, there are deeper reasons to be uneasy with this approach. Tactics win battles; strategy uses battles to win the war.

Upon closer inspection, the Brothers have more than just their military service in common. Even though African-Americans alone make up more than 15% of our military, only one of the 57 Brothers is black (she’s also one of only three sisters, even though women account for 17% of our armed forces). At a moment when it desperately needs to reach out to new voters, the Brothers offer a vision of a Democratic Party almost exclusively white and male. For that matter, at least 22 of the Brothers—nearly half—served their time during the war in Viet Nam, not Iraq. Another five served in the first Gulf War; one even served in World War II. Ah, for the halcyon days of the greatest generation (segregation, McCarthyism, the Korean Warâ¦). It’s often noted that the number of veterans in Congress is at its lowest ebb in decades; progressives want to believe that if only more of our representatives had a firsthand understanding of the costs of war, they’d be less eager to start them. Of course, none of those vets balked at Viet Nam.

Over in Illinois, Tammy Duckworth, one of the three women in the Band, was recruited by the Dems to run for a seat in the House this year. But first she’d have to overcome an opponent in the Democratic primary, Christine Cegelis. Infuriated by the war and the administration’s lies, Cegelis had mounted her own campaign against the incumbent, uber-reactionary Henry Hyde, in 2004, and with no support from the party still marshaled 44% of the vote. Hyde announced he would retire shortly thereafter, and with support from the fiercely anti-war Progressive Democrats of America (the group’s Deputy Director went on leave to manage her campaign), Cegelis declared she’d run again for the now open seat.

In exactly the sort of smothering gesture Kos and Armstrong decry (it should be noted that Armstrong contributed to Cegelis’ campaign), the Democratic leadership recruited Duckworth to run against Cegelis, lining up a rumored million dollars in funding and helping her capture crucial newspaper endorsements. On March 22, Cegelis was defeated by just over 1,000 votes. What we lost was Cegelis’ conviction that nothing less than “a comprehensive timetable for withdrawal of the majority of our combat troops at the earliest possible date” is necessary in Iraq. Compare Duckworth: “The fact is we are in Iraq now and we can’t simply pull up stakes and create a security vacuum.” Duckworth lost both her legs and the use of her right arm in Iraq, yet still favors the war—she may be the perfect candidate for the Dems.

Curiously, many of the Brothers don’t have explicit positions on Iraq on their websites. At least a dirty dozen’s worth call for some sort of a timetable for withdrawal, but another handful declare we can’t “cut and run.” The Brothers’ website itself declares their commitment “Not [to] contesting the need to fight the war on terror, but illustrating that the Bush foreign policy makes it more difficult and costly.” A Department of Peace will never win elections in America. That doesn’t make accepting the need to wage war on an emotional basis a formula for victory.

It was in the hands of a Democratic president that the “peace dividend” evaporated (and the “two-front” military it went to support has proved spectacularly inadequate to the task in Afghanistan and Iraq). While many of the Brothers have genuinely progressive positions on social security, health care, trade, etc., how they would reconcile those positions with a defense budget that has grown by almost $100 billion since 2000 (and now stands at almost 20% of the federal budget) is unclear. Four of the Brothers have worked as defense contractors since leaving the service; counting on veterans to rein in military spending so that we can all see a doctor when we’re sick seems like a good way to add a few more hours of waiting at Methodist. After all, as Eugene Jarecki recently reminded us, Eisenhower intended his farewell address to warn of a military-industrial-wcongressional complex.

Eventually Americans will have to make some hard choices about the size and role of our military. Of course, given the propensity we’ve shown for that up until now, it’s not out of the question that circumstances will make them for us. Until then, we must resist the turn toward militarism. It’s subtle, this pressure: the greatest generation, the band of brothers, the constant reference to the President as the Commander-in-Chief, the exaltation of the martial virtues. Just as the flags are being packed away, all those now tattered old glories rolled up for another tragedy, we take a half-turn toward Strong Men in our desperation. It’s tempting, this retreat to the protection of aggression, of the badass in desert camo and wraparound shades cradling his M-16 on some unnamed Baghdad street, of those who possess this knowledge of blood and fire that can’t be questioned. And if, come November, come 2008, it leaves us indistinguishable from the other side, if we are moving the goalposts, shifting the frame of public discourse until only the military man can discuss matters of “national security,” we run the risk of winning the battle and losing the war on the war.

Nicholas Jahr is a writer based in Brooklyn.

Live music in New York City in the summertime: nothing could be more natural, or more welcome. But after the canceled summer of 2020, nobody knew what to expect this year.

The Case for Impure Vision

It is well known that in the wake of the Romantic era, Cézanne and a host of other artists dreamed of restoring a sense of innocence and purity to our senses—the naiveté of the artist and the innocence of the viewer. Is there such a thing as pure vision? When we are confronted with a painting, is it possible for us to see the object in pure visual terms without being influenced by a host of factors such as one’s prior history of seeing art or one’s acquaintance with art history?