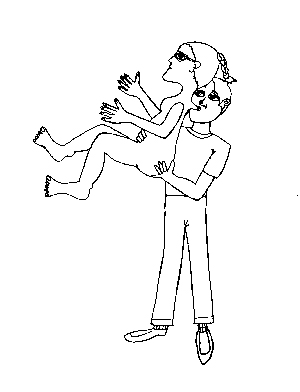 When I first moved to Chicago, I didn’t have any friends so I made a magazine called “Little Girl Games.” The first issue was about 16 pages, I did all the production myself with an envelope as my straight edge and a Pritt glue stick. Later I got work in a restaurant in Rogers Park called the Beefsteak Inn and I have to say I did really love that crew. I still kept making my magazine but when I did the production, my friends would come over and drink beer and smoke pot while I worked.

One day, they were sitting around and Jill said, “I know a guy who has access to an industrial stapler.” That had been kind of a problem with the magazine – opening a regular stapler usually broke them after a bit.

When I called I said, “Hi, my name is Jane, I hear you have access to an industrial stapler, wanna get married?”

He replied, quite sexily, “I have access to a lot of equipment.”

As it turns out he was the foreman of a printing shop that did in-house work for an investment banking firm. The shop was on the far southwest edge of the Chicago downtown and had once been a ladies’ undergarment factory. There was a spectacular view of the stockyards and then the entire south side of the city and the office was beautifully done in refinished wood floors and columns with paintings of ladies in semi-undress: kind of half toga, half bra outfits.

Tom believed in letting the artists use the shop at night. There was a group of three artists who also used the shop a lot. They have now broken up as a group but are a) curator at the Brooklyn Museum, b)art director of Paper Magazine and c)chief wine buyer for Tavern on the Green. Darryl, Christine and Danny.

After I had done more of my magazine and some other projects, my mom called.

“Hey Jane, I had a great idea. You should write a book about bathrooms in California and I could drive you up and down the coast.” My mom was always thinking up ideas to get me back to California. I realized almost immediately that she had a great idea that would work perfectly well in Chicago.

That’s how I learned I could do a book myself.

My next book was a book of short stories called “Some Stories of Love and Romance” that I realized would never get published by a regular publisher, so I did that myself too. Phew, some guy at Alpha Printing talked me into 16 point type. I had meant to bring that book with me when I moved to New York as my calling card. Instead I sent them all to paper recycling. There was one box that I kept in a closet in my first apartment on Bank Street. Often I would dream that I looked at the books again and the type-face was okay. Sometimes I would wake up and look. No, not okay.

I wrote some novels. I published some of them. Some weren’t good enough for all that work. I did a few books for other people. Same thing.

Cut to: years later, I write a diet book. I mean I have the metabolism of a snail and like to eat enough to keep a 6’4” 300 pound man alive. I’m in LA working on a no-budget movie when my agent calls.

“The editors want to meet you. How soon can you get here?”

I got my tickets (begged some frequent flyer miles from my sister Kate) and ate nothing but vegetables for three days. Got my best suit dry-cleaned.

My agent and I met for a strategy meeting that night then agreed to meet again at 9 am the next morning to make the go around.

When we leave the building my agent says, “What do you think?”

The next editor is a type of girl I recognize immediately. In New York, both magazine and book publishing is thickly populated by what I call “runts of the creme de la creme.” Girls who grew up in wealthy families in Connecticut or Westchester, are expected to be great, but turn out only to be okay. Their older (or younger) sister is exquisite and a Rhodes Scholar but, these girls, while attractive, yes, and slender and tall, these publishing girls are without one smidgeon of real beauty. They are canny, but not that smart. The families park these girls in publishing in New York, where they hope the girl will meet a lawyer or investment banker and produce children who, with any luck, will once again bring the gene pool up to snuff.

“Everyone around here loves your voice,” the editor says.

The girl ushers us into her office, with its beautiful view of Central Park, and out of her mouth comes a stream of every insipid, stupid and wrong-headed statement ever invented about writing. It’s all I can do not to get up and leave. But I’m polite and my agent is there whom I love and I know her relationship with these people involves more than just me, so I listen and cravenly mouth some insipidities myself.

In the lobby, my agent asks, “What did you think?”

I express in no uncertain terms my bottomless contempt and rage, and Lisa says, “Nevermind, we’re going now to the woman who liked your book most. She said if she liked you, she wouldn’t be able to stop herself from buying it.”

Okay. I admit it. I’m excited. And I really do love this third publisher. They’re my favorite. They’ve done all kinds of books I respect. They did the first book about AIDS and it was brilliantly written. They did a science fiction book that I’ve gotten for everyone I know under 13 because it is such an amazing treatment of sibling rivalry. It seems to me that every time I’ve bothered to look at who published a book because I know it was a risk, it was them.

The offices are everything I want them to be. Creamy walls. Subdued grey carpeting. The assistant to the editor, leading us to a conference room, says: “I love your voice.” I shrug it off as we enter the conference room. On the shelves: the first editions of almost every book I’ve ever loved. I feel it: it is my moment, it is. My agent and I wait, surrounded by greatness, and part of the greatness. I bask.

The editor appears, twirling, swirling into the room with a flourish. She stops on a dime, cartoonishly, and pointing her finger at me like a Saturday Night Live parody of a lounge lizard on the prowl, huskily proclaims: “Jane King, I love your voice.”

“Wait,” I tell myself, “Calm down. All is not lost.” I tell her real stories (and there sure are plenty) in which I am clumsy, a buffoon, a fool. I try to find people we know in common but she makes fun of my friends for being too “nice” and her “best friends” (I know them, yes. I know them. Shouldn’t that alone be enough?) are the worst sharks on the planet. I make some jokes. I can’t fucking turn her real. Finally I give up. I put my sunglasses on and endure the rest of the meeting. In the coffee shop afterwards, my agent gently chides me, “You know Jane, you should let them decide they’re not interested in you.” My dream, turned to ashes. Dust.

In May I’ll send myself on book tour. I’m going to go to California, get my parent’s Toyota truck and load it up with books and take them on a circular tour of the United States. My plan is to stop in every town where I have friends and have book parties at their house and also do a radio interview in that town. I figure I can do forty stops in fifty days. I mapped out the route already, told all the friends and called the radio station. People have ideas about accompanying me during different segments. I mean, who knows, the way I figure it, with a plan like that, a plan that invites adventure bad and good, how can I help but have an amazing, fabulous time, no matter what happens with the book? And that’s really the point in the long run anyway, isn’t it? Uh, isn’t it?

In 1976, the shop stewards at the British Lucas Aerospace Corporation published a document that would come to be known as “The Lucas Plan.” The company was planning to lay off a significant number of workers as part of a restructuring effort. Faced with the prospect of losing their livelihood, many of these workers banded together to propose an alternative: that the British government should intervene to prevent layoffs so that the workers could redeploy the productive assets of the company towards socially useful ends rather than military contracting.

What a year 2022 has been, and what have we learned? Should we ask again how fragile the nature of being human is?