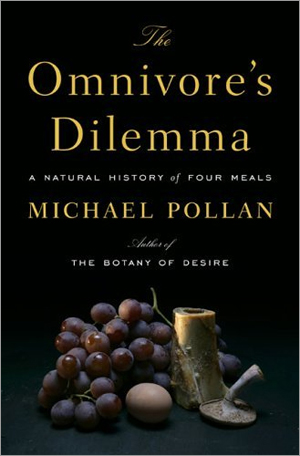 You probably never wanted to look too closely at a chicken nugget. But what if you discovered that the true contents of that nine-piece box are a gallon of petroleum, at least a dozen pounds of processed corn and a touch of butane? You might switch to free-range chicken from Whole Foods and organic asparagus. But then you find out that the free-range chicken lived her life in a warehouse with 20,000 other chickens. And the asparagus was flown in from Argentina, using oil for which the US military is fighting and killing. What’s visible on our plates is only the tip of the iceberg—and I don’t mean lettuce.

So what should we eat? That’s the genesis of Michael Pollan’s new book, The Omnivore’s Dilemma: A Natural History of Four Meals. Piqued by our “national eating disorder,” Pollan writes that the real conundrums are: “What am I eating? And where in the world did it come from?” He sits down to four different meals—one each from McDonalds, Whole Foods, a small family farm and one that he hunts and forages himself. Unlike Eric Schlosser’s approach in Fast Food Nation, Pollan parses the subject as scientist rather than political activist. There are, however, political implications to what he finds. And unlike Schlosser, Pollan doesn’t focus solely on industrial food—he aims to understand the realities of the organic movement and the complex evolutionary balances between animals and the earth. To this end, Pollan follows each one of the four meals down its food chain to find out where, exactly, they originated and how. This unfurls into a passionate and meticulously-argued plea for conscious eating.

Pollan unravels his McDonald’s meal and find himself in a corn field—all those unpronounceable words like maltodextrin and xanthan gum, it turns out, are made from the ubiquitous grain. Of the 38 ingredients in a chicken nugget, 13 of them are corn. And over and over again, Pollan finds that industrial farming, with its emphasis on producing as much volume as quickly and cheaply as possible, has subverted delicate balances that once existed in nature. One example among many is the development of synthetic nitrogen fertilizer in 1947, which resulted in a cascade of disastrous consequences for the environment and our health. Now, instead of having to rotate crops (including legumes, which used to provide nitrogen to the soil), farmers are able to over-farm their land with corn, increasing our reliance on fossil fuels, which are needed to produce more fertilizer. In turn, nitrogen run-off from farms pollutes drinking water and destroys ocean eco-systems. Crops grown with synthetic fertilizer are more attractive to pests, leading farmers to rely on chemical pesticides. Synthetic fertilizer has even exacerbated over-population—Pollan writes that, without the invention, two out of every five humans alive today would not have been born. There’s a natural limit to the amount of life the earth can support, but we’ve found a way around it.

Pollan’s clear-eyed prose is equal parts science and detective work. But he’s also prone to gorgeous flights in which he examines food as metaphor. While munching on a McDonald’s French fry, he reflects that it’s not so much comfort food as a “signifier of comfort food. So you eat more and more quickly, hoping somehow to catch up with the original idea of a cheeseburger or French fry as it retreats over the horizon.”

So is organic better? Whole Foods, with its pictures of happy chickens and cows in green pastures, certainly makes us feel virtuous about what we buy there. Pollan dubs this phenomenon “supermarket pastoral”—a fantasy that he squashes on a trip to the “free-range” chicken farm and to a large organic lettuce farm where huge amounts of energy are used to keep the crop (picked by migrants) chilled. Organic is undeniably better in terms of pesticide pollution, but Pollan finds that the enormous farms from which Whole Foods buys are not so different from traditional industrial farms that supply McDonald’s. The catch-22 is that if organic doesn’t go industrial it will forever remain yuppie food, too rarified for many to afford.

Up until this point, the book has been dense, winding and a little depressing—much like the food chains that Pollan has been unraveling. But the tone of the book lightens when he finds Polyface Farm, a small, family operation where chickens, cows, pigs and crops exist in a symbiotic cycle in which the chickens eat pests; the cows eat the grass; the pigs compost the cow manure and so on. It’s a food chain with a comprehendible, natural simplicity. At this farm, animals are allowed to act as they have evolved to act—it’s not that eating animals is wrong, Pollan concludes, it’s subverting natural processes that is not only unhealthy but also immoral.

Most of us have a vague sense that bad things may have occurred to get our dinner onto our plates. But Pollan argues that there shouldn’t be anything vague about it—that we ought to know the consequences of our dinner. He writes with a scientist’s love of details and refuses to let anything remain abstract. If he says he’s going to figure out where the chicken nugget came from, he’s going to—even if it requires him to explain the natural history and evolution of domesticated corn, as well as ‘corn sex’ (self-pollinating and wildly promiscuous) and why the USDA is okay with just a little bit of butane in your food. Pollan is not writing as the food police, but as an epicurean Sherlock Holmes, who wants to get to the bottom of it all.

Sarah DiGregorio is a freelance writer living in Brooklyn.

David Shrigley: DO NOT TOUCH THE WORMS

Life in 2020 is starting to feel like one big can of worms. That is how David Shrigley seems to think we might be feeling about it in any case. For his largest solo exhibition to date, DO NOT TOUCH THE WORMS (2020), the Turner Prize-nominee known for his distinctly wry British humor has filled a gallery of Copenhagen Contemporary’s industrial warehouse on Refshaleøen island with twenty, larger-than-life, inflatable replicas of the pink, writhing creatures.

Dance is often assumed to take place in a singular delineated space with specific bodies and specific movements. But these assumptions limit our understanding. Works such as these reveal that we can also dance with those not physically there beside us.